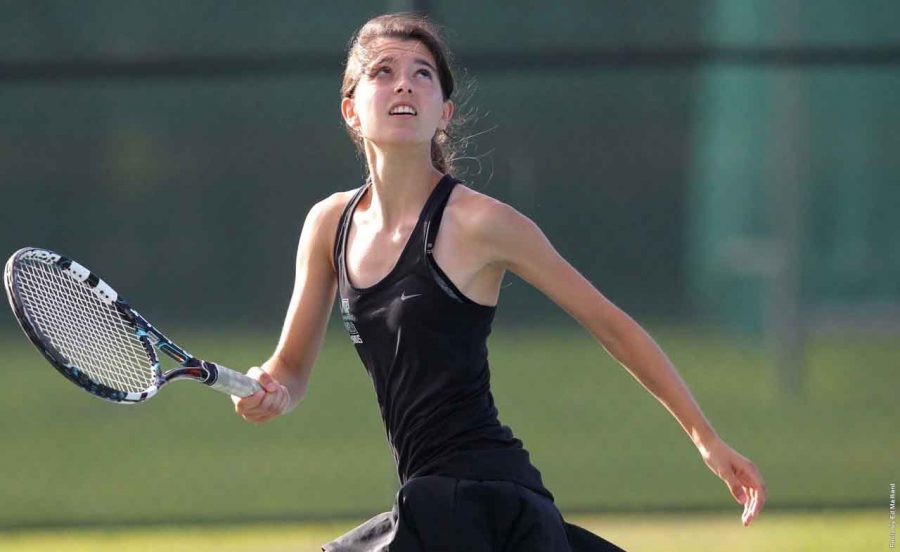 The Mercyhurst women’s tennis team put its best forward in the Pennsylvania State Athletic Conference Singles/Doubles Championship held Oct. 7-9 in Bloomsburg.
By the time the tournament was over, junior Saioa Gomez de Segura had won her third straight Singles Championship in her Mercyhurst tennis career.
In the beginning of the Singles portion of the tournament, the team had Gomez de Segura, sophomore Kayla Frost and junior Adrianna Jeffress entered.  The first round saw all three advance, with scores of 6-1, 6-0 for Gomez de Segura, 6-3, 6-3 for Frost and 6-2, 4-6 and 11-9 for Jeffress.
The second round saw Jeffress eliminated 7-5, 6-4 by Seton Hill’s Diana Carvajalino, but Gomez de Segura and Frost both advanced with the scores of 6-0, 6-0 and 6-0, 6-2.  Frost would be eliminated in the quarterfinal of the Singles tourney by Carla Corrochano Moracho  6-4, 3-6 and 11-9.
Gomez de Segura would go on to win against her opponents in the quarter (6-0, 6-0) and semi-finals (6-0, 6-1), however, and eventually was able to best Jarka Petercakova of IUP in the final 6-4, 4-6 and 10-7 to be crowned the PSAC Singles Champion.
“Despite the weather conditions (wind and cold) I was able to bring up my best tennis,” said Gomez de Segura. “I am really excited about this achievement. I didn’t expect winning the PSAC for the third time in a row.”
For the Doubles Tournament, senior Annie Baich and Gomez de Segura won their first two games 8-1 and 8-2, but lost to the duo of Luise von Agris and Petercakova of IUP 8-1.  Petercakova and von Agris would later go on to win the Doubles Tournament in the match following theirs with Baich and Gomez de Segura.
Both Gomez de Segura and Baich took the time to weigh in on the result of the tournament.  Gomez de Segura stated that she was “super excited” to win her third straight PSAC Singles, and that it came somewhat unexpectedly when she first won as a freshman.  Gomez de Segura is a native of Vitoria, Spain, and was named PSAC West Freshman of the year and is overall 11-0 this year for Singles.  When asked about the greatest strength of the team, Gomez de Segura cited the strong team chemistry and the fact that she and her teammates cheer on each other in their matches.
Baich commented that as a senior she was sad that the fall schedule was over, but was excited for team championships in the spring.  She viewed this season as the most successful of all her years so far, citing the performance in ITAs and the success of the Doubles teams in the season as a whole.  The ITA Tournament saw Baich and Gomez de Segura defeat Mercyhurst’s own Jeffress and Frost for the Doubles Final, and Gomez de Segura win the Singles Tournament as well.
The Women’s Tennis team is next scheduled for Feb. 17 against Lewis University at Westwood Racquet Club.  It will be the team’s first tournament of 2017.