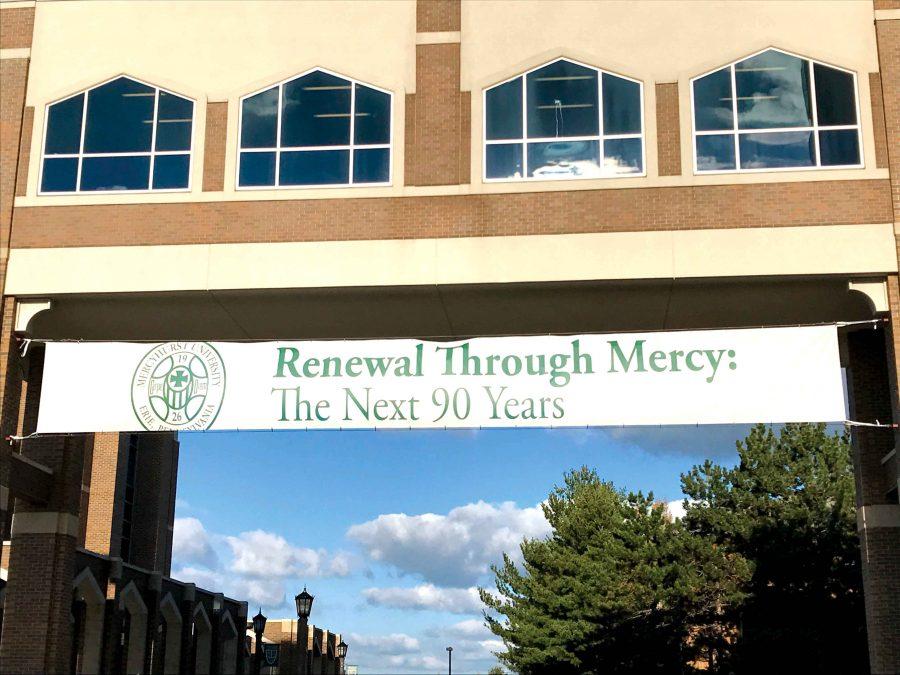 A sign hung from the Center for Academic Engagement’s walkway at the front of campus, marking Mercyhurst’s 90th year.

Mercyhurst has a long history of strong leaders and a strong community. Opened in 1926 by the Sisters of Mercy, the university is currently celebrating its 90th year.

These sisters were the backbone of the development of this institution. Sister Patricia Whalen states that they fund raised as well as provided for the institution with their own financial resources.

Sister Lisa Mary McCartney speaks highly of Mother Borgia Egan and her dedication to the university during a rough time in American history.

“Her determination in the enterprise of founding Mercyhurst was her persistence in building the tower and Christ the King Chapel right during the Depression. That showed her desire and strength. It took her 24 years to find the right gates so they weren’t installed until 1950.”

Not only did Mother Borgia emphasize the building of the school, but she also emphasized building the faculty.

“She built a faculty of sisters with Ph.Ds at the time in the 1920’s. She sent them to many public universities in the country,” McCartney said.

Sister Carolyn Herrmann initiated the school becoming co-educational, as well as a plethora of other changes. Herrmann became president of the college in 1962. She created the office of advancement and an admissions office. Additionally, Herrmann enlarged the library, built Zurn Hall and Baldwin Hall, and stressed the need to write grants.

“She recognized the importance of having campaigns to fund these buildings… Her leadership shifted the view to increase enrollment and make an administrative structure to help enrollment,” Whalen said.

McCartney noted her support of current President Michael T. Victor being chosen as the 12th president in 2015, which she calls the most significant and promising event for Mercyhurst.

“…In a year, he has managed to re-establish the strong teaching image of Mercyhurst and developed a new core curriculum that carries the original mission of the Sisters of Mercy,” McCartney said.

Both Sisters mention the presence of other sisters on campus being less prevalent than years ago. McCartney said when she was at Mercyhurst as a student in the 60’s, the college was staffed by sisters on campus. Now, she is the only Sister of Mercy in a full-time position left on campus. Whalen mentions this change as well.

Fortunately, they both believe that there is a commitment to mercy and the spirit of the Sisters still remains on campus.

“Sisters are still very interested in Mercyhurst and still active on the board. Our retired Sisters pray the Rosary every day for Mercyhurst. There is still deep commitment, love and affection for Mercyhurst and it will still endure as long as the Sisters of Mercy endure,” Whalen said.

Victor mentioned other milestones throughout Mercyhurst this year.

“This is also the 20th year of the D’Angelo Performing Arts Center and the 25th year for Mercyhurst Northeast.

For D’Angelo, some events have been Chita Rivera and Apollo’s Fire to take place in December. We are also really focused on what we will do for the 100th year. We have a record freshman class as well during this 90th year.”

Victor said he believes the important aspects of Mercyhurst is our Mercy mission, our liberal arts core and our motto, ‘Carpe Diem.’ He emphasized Mercyhurst’s welcoming community and desire to take care of the students. Most importantly, he spoke of Mercyhurst’s growth from his first year as President.

“It has grown exponentially. Mercyhurst is in a renewal. A sense of school spirit has been ignited that has not been seen in a decade with the Mass of the Holy Spirit, Homecoming, and Hurst Day. There is a new energy; it’s a friendliness and caring energy. We pulled it back in and renewed it,” Victor said.

Whalen further emphasizes that Mercyhurst University is truly a community.

“For me, Mercyhurst is a combination of the vision of many people. It began with the sisters in 1926 and they wanted to educate females. The commitment of the Catholic Intellectual Tradition for education focuses on the liberal arts and recognizes the preparation of students for jobs. It is a community effort. Each year, staff embrace the vision and developed it throughout the years.”