Get a ‘charge’ before Halloween 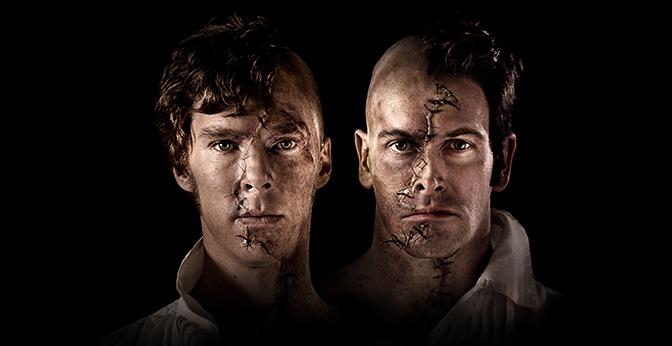 Benedict Cumberbatch and Jonny Lee Miller as their alternating role of Frankenstein’s creation.

Are you ready to get into the spirit of Halloween? Then come to the Mary D’Angelo Performing Arts Center on Oct. 30, at 1 p.m. to see “Frankenstein” presented by National Theatre Live.
The National Theatre Live is a unique way to view a play as it is performed in real time without traveling very far or paying high rates for tickets.
The production performance is live in the United Kingdom and it is transmitted to theatres and performance spaces throughout the world, such as Mercyhurst University.
In the production, based on the novel by Mary Shelley, Victor Frankenstein is a young man looking for the secret of life.
He becomes so obsessed with his desire to find a secret formula that he spends months creating a human out of odd body parts.
When the monster unbelievably comes to life, Victor goes to tell a friend, and when he returns, the monster is gone.
Shortly after, Victor receives a letter bearing sad news of his youngest brother’s untimely death.
Convinced his horrific creation is behind the crime, Victor vows revenge.
The play continues, with an unusual relationship forming between Frankenstein and his creator.
The cast includes Benedict Cumberbatch and Jonny Lee Miller alternating roles as Victor Frankenstein and his creation, Haydon Downing and William Nye as William Frankenstein, Andreea Padurariu as the female creature, along with several other cast members playing other roles.
The play is directed by Danny Boyle.
If you are looking to get into the Halloween mood, then come to the PAC on Sunday to see “Frankenstein.”
Tickets are $18 for adults and are free for any Mercyhurst student who shows their ID at the box office.