Election 2016: Inside the Mercyhurst Center for Applied Politics 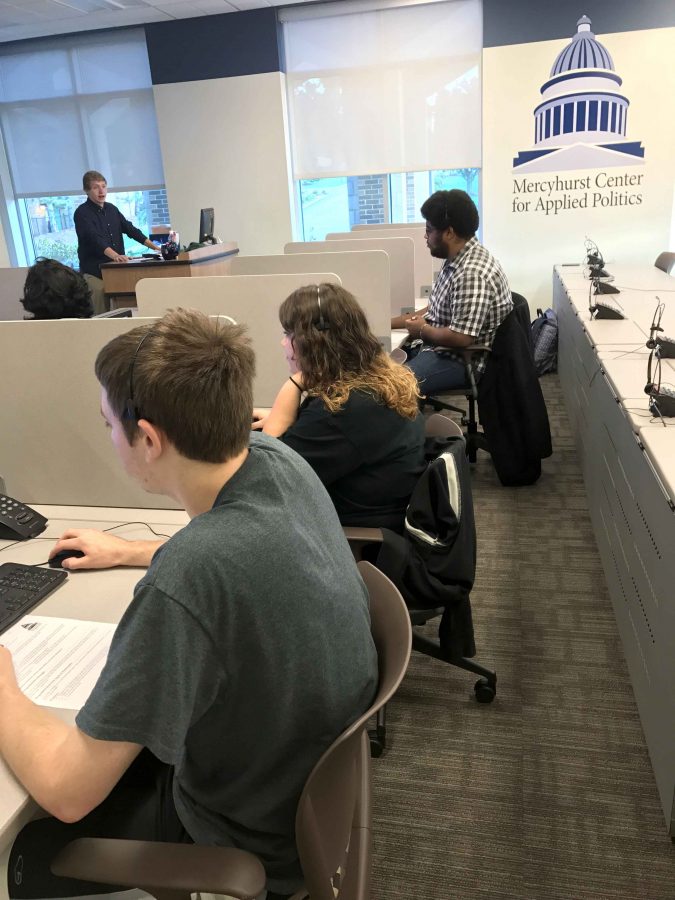 Under the direction of Joseph Morris, Ph.D., director of Mercyhurst Center for Applied Politics, students have had the opportunity to be a part of a call center involved in polling registered voters throughout Pennsylvania, in what has shaped up to be an election year that sharply contrasts any previous one in recent memory.

The MCAP 2016 General Election Poll shows the race divided between Hillary Clinton, Donald Trump, Gary Johnson and Jill Stein, with each getting 42 percent, 41 percent, 4 percent and 3 percent, respectively, of the vote.

The poll states that “the commonwealth is among the most important battlegrounds of the 2016 presidential election.” Pennsylvania itself is worth 20 electoral votes, which is tied with Illinois for the fifth most in quantity. Although historically a Democrat state, the Trump campaign has appealed to many blue collar voters who have seen their industrial jobs go overseas or eliminated entirely.

The poll also asked voters a few other questions, such as the Senate Race between Republican incumbent Pat Toomey and Democrat Challenger Katie McGinty, as well as their thoughts on Barack Obama’s presidency, with questions about foreign policy and the economy for example. Toomey leads McGinty by only one point, and Obama was given a “C” on his report card by polled persons.

Junior Alex Yacobozzi is a student project manager that is heavily involved in the MCAP.

“We are one of the top 20 biggest polling stations in the United States, and in the top 10 for Pennsylvania,” said Yacobozzi. “We’re not too big; we have 35 tables here, but we do really good research.”

Yacobozzi, a Hospitality major, does polling as a work study, but explained that students do not have to be Political Science majors to be involved. Students in American Government and in the Road to the White House classes also get involved as poll operators for class credit.

Pollsters begin by randomly selecting people that are on the registered voters list. They then call these people and begin their questioning, using a computer-based questionnaire as their script. Respondents are asked about their enthusiasm to vote, for example, and are given a range of options when answering questions. Respondents are allowed to omit themselves from answering questions on matters such as personal finance.

Students are given an hour training session a week prior to polling. When polls are conducted, students report from 6-9 p.m. Monday through Friday for two weeks.
Yacobozzi made it clear that MCAP is a recognized agency in the field.

Interestingly, as Yacobozzi notes, MSNBC chose to leave out the group’s data on Bernie Sanders, instead showing Clinton in the matchup with front runner Trump, and Trump vs. Ted Cruz and John Kasich. This was in light of the fact that Sanders was beating all of the Republicans by huge numbers – even Kasich, who polled above Clinton in a general election result.

Margaret Hackney, sophomore Intelligence Studies major, is the other project manager, which means coordinating over 100 students, assisting in survey design and “performing data management and dissemination to major news outlets.”

Her favorite part of the job is being a part of the election in real time and affecting the course of history. “We had John Kasich retweet our poll last spring,” Hackney said.

The MCAP ran its first poll in 2010. Since then, it has run a range of polls on subjects varying from elections to the people of Pennsylvania’s thoughts on a variety of topics, such as ISIS, ebola and fracking. All of the group’s polls are available online on the Mercyhurst website under the Political Science tab. The clip of Mercyhurst’s poll being featured on Chris Matthew’s “Hardball” can be seen online on the Mercyhurst You Tube Channel.