Boston winds blow Lakers to end of the Charles river 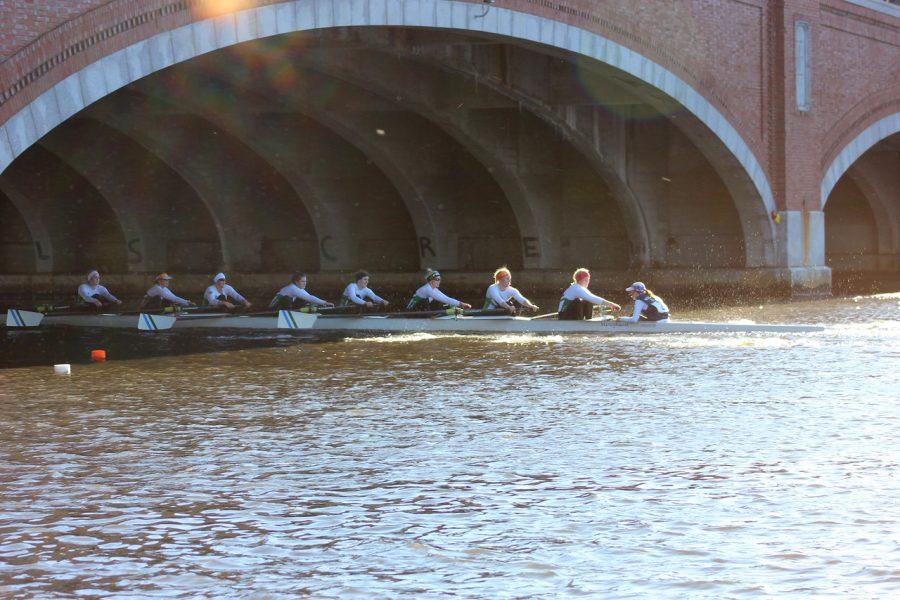 Mercyhurst University women’s 8 placed ninth, despite the wind. They finished the course in 18:58.532.

The Head of the Charles Regatta — a fitting name for the two-day competition held on the Charles River in Boston this past weekend. Mercyhurst University women’s 8 placed ninth out of 28 crews this year.
Mercyhurst finished the winding, three-mile course in 18:58.532 while fighting the Boston winds.
“If it wasn’t the Head of the Charles, races could have been canceled or delayed because of the wind. Because it’s such a big race, you can’t cancel it. It’s like canceling the Oscars of rowing,” Chelsea Guida, coxswain of the women’s team, said.
The three-mile upstream course begins at the Boston University Boathouse and ends near Herter Park. However, the weather New England poses can be more challenging than the winding course. Winds up to 20 miles an hour can easily blow the boat off course.
“The wind affects the way we row. The boat is light and we have long oars. It affects the way we row by making it harder to steer,” junior Leah Griffin said. Griffin is a veteran on the course, placing second with the team last year and competing again this year.
There are many turns on the HOCR course. If the wind is blowing in the opposite direction the boat is turning, it is more difficult to turn quickly.
“What made it difficult is you start in a ton of wind, then it dies down, and then it picks back up again. So, you end up having to adjust the stroke a lot,” Guida said.
Dealing with the wind is only one of the challenges of this regatta. There are other boats on the water at the same time, trying to navigate the corners of the river. Sometimes, it can get congested and the coxswain is forced to make difficult decisions.
The coxswain is the leader of the boat. He or she coaches the team through the course from the head of the boat. If another team makes a move on a boat in front of them, the boat has to move out of the way so the other boat can pass.
“Another team was coming up on us, but they didn’t tell me to move. If they did tell me, I could only move one way which actually gave me the faster line,” said Guida. “We got really close but I just continued and made the turn as planned.”
The goal of this race is to finish in the fastest time, which means taking the course in the least amount of meters as possible. Taking wider turns leads to more meters and a slower time.
“Because I held my line, I was able to take the turn in the least amount of meters,” said Guida. “The announcers even talked about it, calling me a very aggressive coxswain. People onshore thought we collided, but we just made it.”
Another aspect of this race is that other boats cannot penalize each other. In regular-season regattas, boats can penalize each other for collisions and other fouls. This leads to unseen penalties going uncalled, sometimes giving the advantage to other boats.
“You can’t have penalties in this race. Only officials onshore can penalize boats,” Guida said.
To prepare for the regatta, the team traveled to Presque Isle where the weather presents similar challenges as in Boston. Griffin also said they practiced long rows on the rowing machines indoors.
“We always want to place, but we just want to have a good race, a good row and work together as a team,” Griffin said.
The HOCR is a unique race as anything can happen on the water. There are more factors teams must deal with than in common regattas.
“Seventy-five percent of the race is how you deal with the Charles (River): all the turns, more boats racing together, collisions, mess-ups and the weather,” Guida said. “Having a good coxswain is very important–it can make or break the race. That’s why it’s called the coxswain’s race.”
Although the race is challenging, it is the most popular and well-known race in rowing. Teams compete by invitation only, including the best teams in the world. Olympic rowers can even be spotted on the water.
“It’s probably my favorite race I’ve ever rowed in. It’s very exciting,” Griffin said.