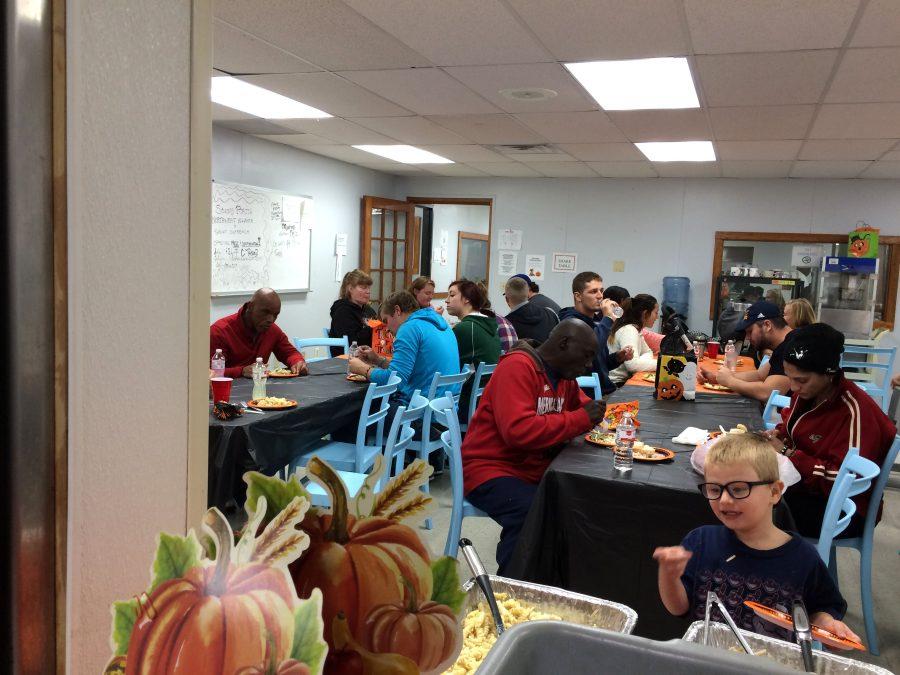 One of the dinners took place at the Emergency Shelter where students prepared and served the dinner.

Mary Hembrow Snyder, Ph. D., professor of religious studies and director of the William C. Sennett Institute for Mercy & Catholic Studies offers a Catholic Studies course entitled Exploring Catholicism. In her course, students get the opportunity to prepare a service dinner at a community shelter in Erie.

“Catholicism is a pathway to God and walking that path necessitates conversion, a metanoia from slavery to freedom, from inauthenticity to authenticity,” Fr. Richard Molloy said.
Molloy is the author of one of the books Professor Snyder has her students read. The purpose of this course is to present a balanced view of Catholicism at the dawn of the third millennium. One way this is achieved is by participating in her service learning project.

Snyder created this project for her class 20 years ago, and she has three important reasons why she started it.

She believed students deserved an opportunity to learn the mission of Mercyhurst, to experience poor, disenfranchised people as human beings rather than stereotypes and to better, more concretely understand the key thinking of Catholic social teaching.

“Every time my students participate in a service project, I experience the presence of God in them,” said Snyder. “Their kindness, their hard work, in terms of the preparation they did, their openness, the respect they show the people we serve, they then become, for me; the face of Christ.”

Snyder has two Exploring Catholicism classes this semester, and within these classes the students break up into three groups. These groups either went to the Emergency Shelter on West 17th Street, or the Lodge on Sass on West Ninth Street.

Each student in the group contributes a minimum of $5, and then they are able to go around Erie looking for businesses to donate food items or other supplies.

The groups come up with and make their own entrees, sides and desserts for the dinner. Before serving the residents at the shelters, the students were given a short tour of the buildings.

“It was the first time we all made green bean casserole so we were nervous,” said Albano. “It came out really good though, and a lot of people loved it and got seconds of both.”

While some students served the meal to the residents, others were able to sit down and talk with them as they ate. This allowed the students to learn more about the people and hear some stories.

“I loved it,” said sophomore Exercise Science major Anna Warner. “I thought that the people were really friendly and you couldn’t tell they were living such different lives than us.”

Contributions from students’ parents, putting on bake sales and getting donations from local businesses allowed senior English major Marina Coletta and her group to raise enough money to have their dinner catered by Molly Brannigans.

“Our dinner was a success because so many people, both on and off campus, recognized the need in the community this dinner was filling,” Coletta said.

Their group was also able to get the County Mayo Irish Band to perform for free.

“The individuals staying at the shelter were very appreciative of the dinner,” said Coletta. “It was so moving to see several of them so overcome with emotion that they teared up and hugged us.”

Besides preparing and serving the meal, the groups were able to make goodie bags for the residents at these shelters. These included personal day-to-day items like shampoo, conditioner or toothbrushes.

The students were only there for two hours, and many of them wished they could have stayed longer.

This service learning project is a way for Snyder’s students to apply the Catholic teachings learned in class. It gives them the experience of sharing food and companionship with the poor or those “others” our culture often ignores, demeans and ostracizes.

“I thought it was a nice component to the class,” said Amelia Bell, junior Bioarchaeology major. “Everyone involved was grateful and considerate. I only wish we could have stayed longer.”

Snyder appreciates this semester’s students and their positive attitudes toward the requirement to do service learning.