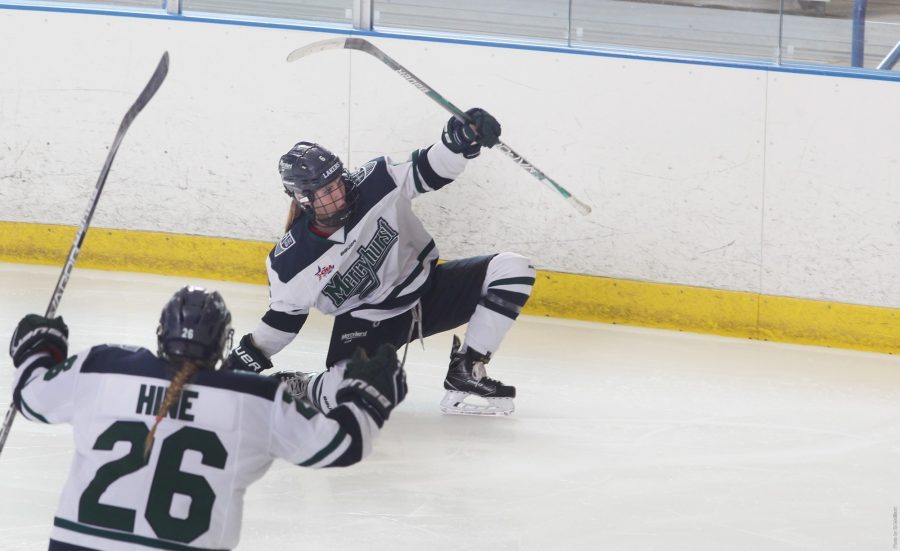 On Nov. 4-5, the Mercyhurst women’s hockey team took to the ice against Penn State University Nittany Lions in the Mercyhurst Ice Center.
The two-game, two-day affair resulted in the two teams splitting the difference, with the Lakers taking the first game 6-4. The Nittany Lions were victorious in the second contest though, squeezing one goal in a 3-2 overtime win.
Game one saw the Lakers fall behind initially. The Nittany Lions scored three straight goals within roughly the first 15 minutes.
The Lakers did not cave, however, and they managed to put in two goals of their own making it 3-2.
Senior forward Megan Whiddon scored the first goal with assistance from freshman forward Michele Robillard and junior forward Brooke Hartwick.
The second was a goal by sophomore forward Rachel Smith, and was assisted by freshman forwards Sam Isbell and Maggie Knott.
A power play in the period tied the game with a goal by sophomore defenseman Sam Fieseler (assisted by forwards Isbell and sophomore Sarah Hine).
The next two goals would also be off of power plays. The Nittany Lions scored the only goal of the second period, making it 4-3.
The Lakers then tied the game again 3:22 into the third period with a shot by senior forward Taylor Accursi (assisted by senior defenseman Jillian Skinner and Whiddon).
From here, the Lakers were able to put up two more goals to claim victory. Accursi scored again with an assist from Hine, and Hartwick got another off with 18 seconds left in the game to end it at 6-4.
In the next game, the first period went completely scoreless for the Lakers. The Nittany Lions scored their singular goal for the period within the last two minutes to take the lead.
The second period again saw the Nittany Lions score to make it 2-0.
The Lakers finally managed to score in the third with a goal at the 6:50 mark by Knott (assisted by Accursi and senior defenseman Horton).
To tie it up, Accursi got one in with just 1:21 left in regular play time off an assist by Skinner and Horton.
The shift in fortune meant that both teams were going to overtime as a result. Unfortunately, the Lakers’ shot at a win was ended with an early goal by the Nittany Lions just 31 seconds into the five-minute overtime period.
Speaking on the second game Accursi outlined the differences between the first and second games.
“We really had to focus on the little things,” she Accursi. “We just had to play them tough. They are a really hardworking team and that is just something that we as a team just need to be better at.”
The Lakers (2-7-1) take to the rink next on Friday at home against Syracuse University (2-5-3).