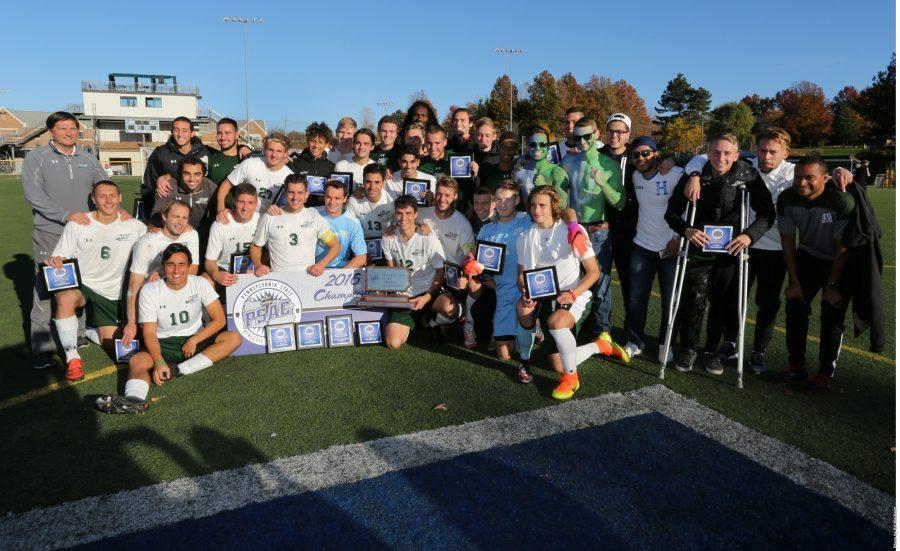 A rush of excitement descended upon the Mercyhurst soccer field on Friday, as the Lakers were set to host the PSAC Championship men’s soccer for the second year in a row. After being stunned by Slippery Rock in last year’s semifinal, Nenad Vidaković’s boys were determined to run the table this time around.
This time, however, they were ultimately successful in their run to the tournament title, dispatching upset-minded Seton Hill on Friday morning and then taking a heart-pounding 2-1 score over rival Millersville on Sunday afternoon to secure their third PSAC title.
“I just really wanted to win this one for (my)self and the seniors,” said senior Mark Roche, tournament MVP. “It was heartbreaking last year when we lost in the semifinals, so it is just a great feeling to get the title back.”
Roche scored the championship-clinching goal in the 52nd minute on Saturday, converting a corner from Connor Wilkinson via a header past Marauder goalkeeper Darian McCauley.
The tally gave the Lakers a 2-0 lead that would be halved just 2:27 later with an unassisted chase from Devin Rediker, the ball played on the right side of midfield.
“It was tough. You know, we just had to dig in deep…and we knew (Vidaković) really wanted to win the title, so we just had to defend like dogs, and that is exactly what we did,” said Roche, playing his final PSAC contest as a Laker. “We managed to run down the clock and get the win.”
The Lakers cracked the scoresheet just 4:54 into the contest when leading scorer Thom Derks took advantage of an unlucky bounce in front of McCauley from a Chris Lund shot in the box, causing a handball off the Marauders’ Tanner Brenize.
Derks immediately deposited the ensuing penalty shot in the top-left of the goal and startled McCauley for his 21st of the season.
“I just knew I had to score, and just (go) all for it,” Derks said.
They soon took advantage of three Marauder bookings—two in the first half just 11 minutes apart—and five offside calls on Steve Widdowson’s squad, along with stout defense against a flurry of 13 Marauder shots, seven of which came after the intermission. Three headers from Rediker in the first half were the result of several Marauder chances, but they failed to beat Brems. The Lakers responded with the first four shots of the second half, the final two of which were Wilkinson’s corner and the header from Roche that hit the twine to the left of McCauley through 5-on-4 traffic.
Two days earlier, the two squads reached the final after two completely different semifinals. The first matchup saw the Lakers come from behind and take down a pesky Seton Hill squad with a back-and-forth 3-2 overtime decision on Friday morning.
Meanwhile, the Marauders exploded for six second-half goals in defeating second-seeded West Chester by a 6-1 margin, outshooting their eastern counterparts 20-12 and holding an 11-5 advantage in shots on goal.
On Monday, the Lakers and Golden Rams, despite their loss, secured at-large bids to the NCAA Division II tournament, the Rams’ first berth since 2002.
The 24th-ranked Lakers (15-4-1, 11-1) will square off in Urbana, Ohio, against the No. 15 Blue Knights this Sunday.
Urbana (13-4-1, 9-3 Mountain East), the third seed in the Atlantic Regional of Super Region 1, fell to Charleston (WV) 2-1 in the Mountain East final on Sunday, but will now host their first-ever NCAA tournament contest at UU Sadium.