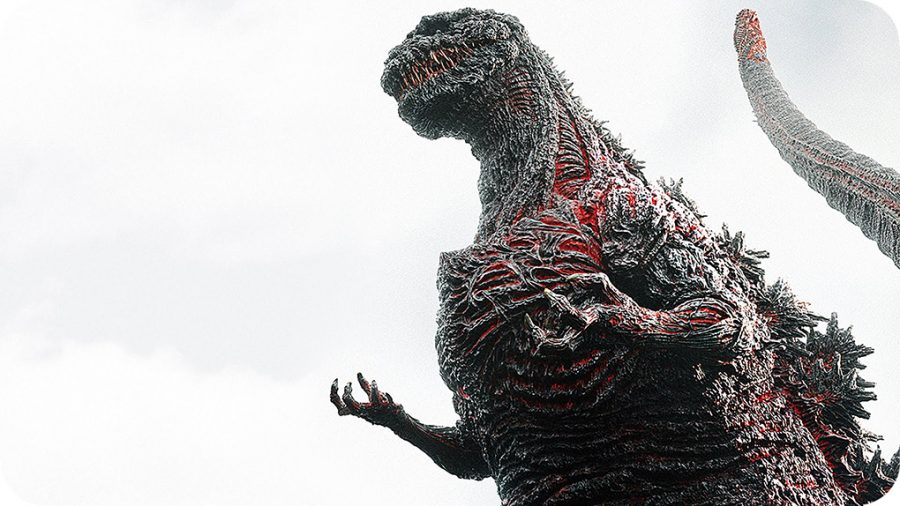 Shin Godzilla starring as himself in the film “Godzilla.”

If you were to ask me who my favorite movie monster is, hands down it would be Godzilla.
Today, we are spoiled with paranormal horror films such as “Blair Witch” and “Ouija”: Origin of Evil,” but to me, Godzilla is more horrifying.
He can represent fears that are all too real in modern society, such as the threats of nuclear weapons, terrorism, war itself and even the fear of nature rebelling against man.
This is a theme that has been deeply integrated in the most recent film in the franchise, “Shin Godzilla” (shin being a Japanese word that means many things, including “new” and “death”).
Directors Hideaki Anno of Evangelion and Shinji Higuchi of the live action “Attack on Titan” movies provided a new and unique take on the king of the monsters after the series’ 12 year hiatus.
The film is pretty basic: Godzilla shows up, and the Japanese have to figure out how to stop the unstoppable; however, it is the characters that are the movie’s Achilles heel.
The movie was trying to see how a modern Japanese government would react to a giant monster invading their country, but sadly, like Gareth Edwards’ 2014 take on Godzilla, “Shin Godzilla” is full of many characters that are not given enough development in contrast to the characters in the original 1954 Godzilla.
There is also little to no conflict between the human characters, in contrast to the original. However, it helps spread the message that Anno and Higuchi were trying to convey that message being mankind looking past its differences and uniting to fight a common foe.
Godzilla himself is truly the main attraction of this film, and even though his screen time is limited, this film really succeeds in showing how much of a threat he really is.
The design of Godzilla is probably the most horrific yet, as he really looks like he is decaying and his skin looks like keloid scars akin to those who survived Hiroshima and Nagasaki.
It appears as if the radiation within him that keeps him going is slowly eating away at his flesh.
If I were to describe this Godzilla in one word it would be “unpredictable,” as you are just guessing at what he will do next, like nature itself.
However, many fans will be disappointed as this is the first fully CGI Godzilla film to be produced by Toho, therefore abandoning the old tradition of tokusatsu style effects.
This is a bit of a disappointment as nothing truly looks like it is organic, despite some truly breathtaking shots of Godzilla destroying Tokyo. Once more, tokusatsu TV shows such as Tsuburaya Production’s long running “Ultraman” franchise still utilizes suitmation and miniature effects which fail to disappoint, so why not the same for Godzilla?
Lastly, Shiro Sagisu’s score for this film is very haunting and fits the film perfectly.
Not to mention that it was a real treat to hear some of the tracks from some of the older installments of the series as well.
Overall, I was lucky to have seen “Shin Godzilla” in theaters in its limited theatrical run in the States as it presented a film with a dark tone akin to the original with a few subtle touches of comedic relief by poking fun at Japanese politics.
If you are willing to sit through a ton of dialogue, then this movie is a must see, for it is a strange new twist on a classic tale about a monster who represents a mistake that mankind cannot correct, but instead must adapt to and coexist with.
3.5 out of 5 stars.