No cold feet for Erie Plunge 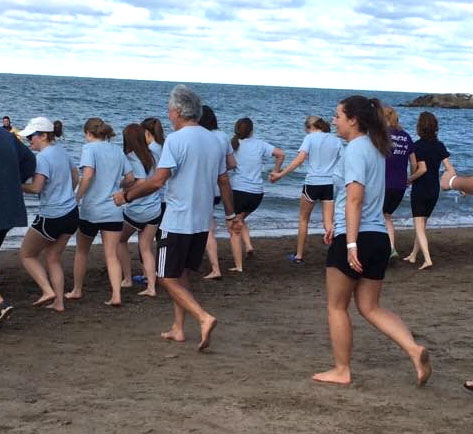 Merychurst students enjoyed a day at the beach Nov. 12. While they may have gotten their feet cold, they had no cold feet when it came to plunging into the 50 degrees Lake Erie to support the Special Olympics Pennsylvania (SOPA). This is the second year that Erie has partaken in the Polar Plunge, which is one of many across the state.

“Freezin’ for a Reason” was this year’s theme, and participants did just that, raising upwards of $70,000 for SOPA. Sam Lioi, senior, played a major part in bringing the Polar Plunge to Erie last year. Lindsay Rowe, who serves with Lioi in the Mercyhurst Student Government, was the first to bring the idea to the MSG.

Heather Shadle, who currently serves as MSG Events Coordinator, having been involved in planning similar Polar Plunge events in her home state of Ohio, volunteered her time and talent to assist with the event as well. Together, Rowe, Shadle, and Lioi brought the idea to life, and it seems that their legacy is one that will outlive their collegiate careers.

Last year, Mercyhurst was represented by about 30 students who raised approximately $3,500. This is to be compared to this year’s 130 registered Mercyhurst students who brought in well over $7,500. Mercyhurst was the most represented out of all schools present, making up about one-fifth of the entire event. These numbers far exceeded the Erie Planning Board’s goals for the year.
Participants gathered at Beach 7 on Presque Isle where they were assembled into waves before taking the plunge.

“Technically, you could just put your toe in and turn around,” said Lioi. “But I believe you should go all in.”

It’s easy to plan the event and ask people to go into the freezing Lake Erie. Lioi, however, goes the extra mile. Not only has he done his part in putting the event together, but he has also been a participant in both plunges.

“It’s pretty cold leading up to the plunge, but once you get about hip deep and just dive in, it’s not as bad. The worst part is probably running back to the tents afterwards,” Lioi said. More importantly, however, according to Lioi, is the companionship that participants feel as they run in large groups into and then out of the water.

To Lioi, the event is about so much more than just raising money. It is about the excitement and camaraderie of the participants doing something bigger than themselves, the team building that goes into effect the day of the plunge, the awareness that is made by holding the event, participating, donating, and also the equipment and transportation that is given to disabled students who would not be given the opportunity to participate in athletics without the efforts of the Special Olympics.

“Some of these people aren’t included on student athletic teams,” said Lioi. “Which isn’t just unfair and unkind, but it also prevents them from getting the exercise that they need to be as healthy as they can be.”

Donations can still be made to support the Special Olympics through Plunge participants. It’s a great way for the Erie community to come together and make a difference. It is important that an event born of the talent and hard work of three diligent Mercyhurst students have the continued support of future Lakers.