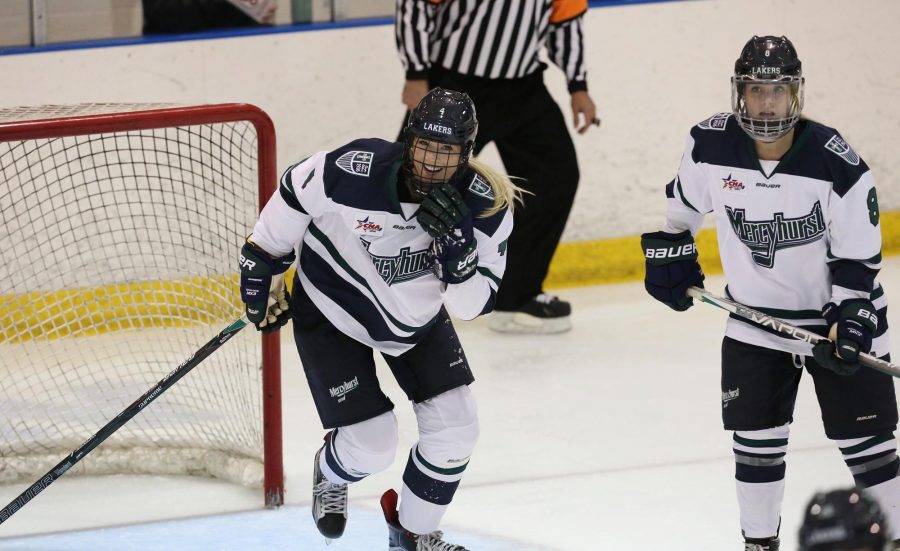 A battle of preseason favorites went back and forth as expected, but now it’s up to Michael Sisti and Paul Flanagan to get their squads back into prime CHA contention.
The Syracuse University Orange lit up struggling Sarah McDonnell in the second period on Friday night in a 4-2 win to hand the Lakers their second straight loss, but blew a 3-1 third period lead on Saturday afternoon when Molly Blasen capped a third-period assault in a 4-3 Lakers come-from-behind victory to send Syracuse three games under .500.
The Lakers got off to a strong start on Friday, taking advantage of the Orange’s second penalty of the first period as Rachael Smith took assists from Blasen and Nicole Guagliardo to strike for her fourth of the season at 12:17.
It handed McDonnell a 1-0 lead that she would ensuingly lose just 9½ minutes later. The tally at 1:58 was followed just 96 seconds later when perennial weapon Stephanie Grossi caught a pass from Allie Munroe to hand the Orange a lead they would never relinquish.
They then tallied again just a minute after killing off their second penalty of the period, but Taylor Accursi was called for hooking at 14:41, leading to Schwarz’s second of the game and the first power-play goal for the Orange, the assists going to Jessica Sibley and Alysha Burriss.
“I think just getting our power-play going was key today, and that power play had some good goals that won us the game eventually,” Grossi told the Merciad after the contest.
Just 30 seconds remained in the second when Sarah Hine set up Paige Horton before Miller turned it aside, but Brooke Hartwick cleaned up and buried her team-high fifth of the season.
But the Lakers’ sixth penalty of the contest—a hooking call on Michelle Robillard—allowed Megan Quinn to capitalize in a third period that saw only six Orange shots, getting a pass from Lindsey Eastwood to put home the insurance goal with 6:10 remaining.
On Saturday, Sisti thought he found a change of morale by starting surprise lead goaltender Jessica Convery, but Schwarz maintained the Orange would not change their game plan for her.
They fought off an 8-5 shot deficit in the first to take the lead with 1:26 left in a very quick first.
The Lakers did find an equalizer at 10:28, when freshman Maggie Knott caught assists from Samantha Isbell and Jillian Skinner, but the Orange did not let their three-period shot deficit haunt them, as Grossi and Brooke Avery scored 2:56 apart to send the Lakers to their second straight game with three goals allowed at the second intermission.
Sisti’s squad turned the table in the third, as Knott, the game’s first star, tallied her second of the game and third of the season at 5:06 with assists from Whiddon and Céline Frappier.
Quinn was sent off 30 seconds later on a cross-checking, leading to Isbell setting up Samantha Fieseler on the left side at 6:08 for her first of the season.
The game remained deadlocked for the following 10 minutes. A late rush for the Lakers saw Smith and Knott set up defenseman Molly Blasen at 16:43 as she fired past Miller’s shoulder for her first tally since switching to No. 8 after wearing No. 12 last year.
The Lakers return to action this Friday at Houston Fieldhouse in Troy, N.Y., as the Rensselaer Polytechnic Institute welcome the Lakers to the Capital Region.