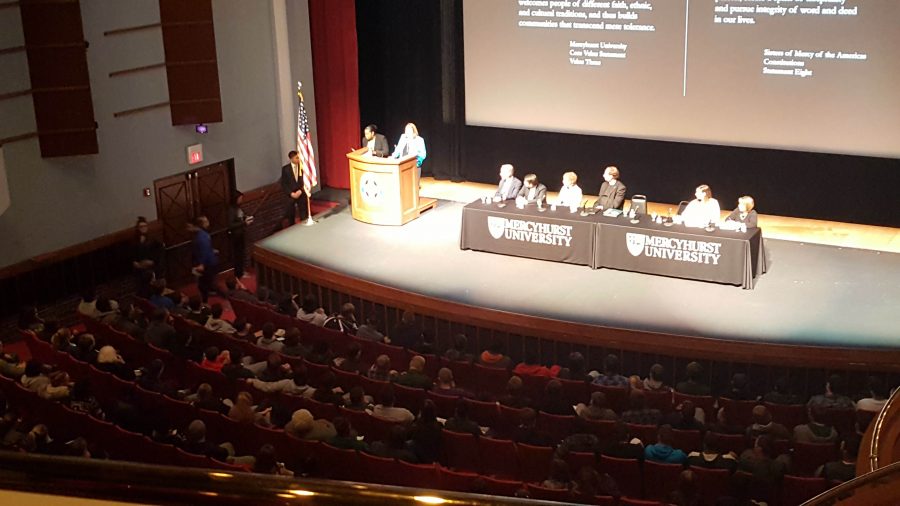 Late last Tuesday, a student brought a racially charged Snapchat to the attention of Mercyhurst University via Twitter. Immediately, the university began responding to concerned students on the social media platform. Faculty and staff quickly rallied behind the scenes to address the issue.

On Wednesday morning around 9:30, students received an email from President Michael T. Victor who voiced his disdain for the post and his support for the affected community. A second email followed that morning announcing a forum in the Performing Arts Center that students could attend that afternoon to ask questions and to hear from Victor and other student life administrators.

“I was sickened last night to learn of a student’s racially charged social media post that went far afoul of our core values,” Victor said. “I cannot erase the pain, the anger, frustration that this offensive post has brought to bear on our University family. Particularly for members of our African American community.”

The act was determined to be a bias-based act. The student handbook describes this type of act to be anything that “violate(s) another person’s rights…(i.e. Race, sex, gender, sexual orientation, color, creed, religion, disability, national origin, age, or status as a veteran).” A $250 fine, disciplinary probation and possible suspension are also possible repercussions for committing a bias-based act.

The case moves on to a hearing which is overseen by a Student Conduct Panel. The panel is made up of two faculty members, two staff members and two students. Each individual has gone through training and has sat on the panel before. A facilitator is typically present, but does not have any voting rights.

Any other individuals participating in the hearing are invited and approved by the adjudicating authority. Witnesses may also be called in. Questions are then asked to help determine what exactly happened. Punishments can include but are not limited to suspension and expulsion. Students are able to appeal any decisions made by the board.

Normally, students are on campus for the entire process. Due to the specific conditions, the students involved were suspended.

“In this case we felt that a hostile environment was created, and that it was such an egregious act that we felt we needed to suspend them immediately and have them off campus, which means, just for clarity, they are not acting as students,” said Laura Zirkle, vice president of Student Life. “They are not allowed on campus, they are not going to class, they are not allowed to go to any of our events or the library or anything like that. They are not permitted here at all.”

Because of the severity of this offense, the Student Conduct Office moved swiftly. Megan McKenna, director of Residence Life and Student Conduct, was notified by one of her assistant directors. She then spoke with Zirkle and Pertrina Marrero, director of the Multicultural Center, the same of evening of the incident.

After McKenna, Zirkle and Marrero had a collective discussion, the Student Life staff, including Zirkle, met with Victor to brief him on the incident. The forum was the result of this meeting.
“We called up MSG, and the MSG people who responded were the ones we were able to get,” Zirkle said.

Some students were concerned about bias by those assisting in sorting the questions written down by students at the forum.

“They weren’t picking and choosing the questions that would get answered, they were collating because we had 10 people asking about the same thing,” David Dausey, provost and vice president for Academic Affairs, said.

The Marketing and Public Relations department did not waste any time responding to students on Twitter. According to Zirkle, they attempted to respond to every student post whether it was thanking them for their support or clarifying misinformation.

“Some have questions and they have tried to respond as quickly as possible so that people aren’t left out there in a vacuum like their opinions don’t matter, because they do matter,” Zirkle said.
Chris Norris, web/social media/video coordinator, emphasized the impact of social media and how the university responded.

“We put a high value on social media as a tool to communicate and engage with our students, families and community members. That means we strive to reply to every single tweet, post or comment,” said Norris. “Due to the nature of what was shared, we felt that everyone deserved to be acknowledged with their concerns and questions and we did our very best in communicating a resolution.”
Although this incident has negatively affected the campus, it has sparked positive conversation.

“The best thing you can do to further the mission of Mercyhurst and the Sisters of Mercy is to search out your own racism and to expel it and to turn to ways of love. Love is the only thing that is going to get any of us away from our prejudices. Love is very effective at bringing healing and harmony among peoples. So, I would ask you to think in your own hearts about where racism resides and to ask God for mercy,” she said.

Students did step out on Twitter, exemplifying the Mercy Mission, according to Norris.

“I would like to thank the students who stepped out and shared words of encouragement and reassurance in Mercyhurst,” said Norris. “Your Laker Spirit and Mercy Pride helped to combat the negative nature of what was spreading across social media. If our founding Sisters had Twitter, they would have favorited all of your tweets!”

According to McKenna, Residence Life is taking steps to help students who feel unsafe or just need someone to talk to.

“More immediately we were trying to—I don’t want to say calm as in pretend it didn’t happen—but make sure the immediate students felt safe because some people do consider (campus) as a safe space and we want to try and uphold that,” she said.

“I think there’s some work we need to do there just in general, and there are certain plans we are heading toward,” said McKenna. “I think across the board we need to take steps to figure out how to rebuild our communities, especially our freshmen areas.”

Some of these new programs will include training staff to incorporate social justice issues in conversations as well as how to respond to bias-based acts.

“There’s been some comments and some feelings out there that do not necessarily coincide with Mercyhurst core values and I think we need to bring that back to focus. And I know that has been a theme for myself as well as many of my other colleagues in student life,” McKenna said.

Residence Life is also looking to partner with Black Students for Unity and the LGBTQIA+ Club.

“There is some work we need to do in (the social justice) area. Trina does great work, BSU does great work, the LGBTQIA+ community does great work,” said McKenna. “We need to expand on that and help them more in their efforts as well. I’m just lucky I have many RAs that are involved in those organizations, so I’m hoping they will feel supported and that we can work together on some of those initiatives in the future.”

These programs are set to premier Fall 2017. Residence Life is also looking at taking other steps to improve feelings on campus.

“Once some healing is done, we need to figure out what the next steps are. Especially me being new to Mercyhurst, I’m taking cues from students as to where do we need to go from here,” McKenna said.

Although Residence Life is taking steps to curb bias-based acts, students can take action in the moment to stop these offenses. McKenna and Zirkle encourage students to call each other out when an insensitive comment is made. There is even a “Step Up” program in place to help students with this.

“It is about encouraging people to bring it up. So if you are comfortable, call it out. Sometimes if you are not comfortable confronting it, bring it to somebody else—ask for help,” said Zirkle. “The biggest thing that we don’t want to have happen is it be ignored. The way that we change these things is by us talking about it and it is by students in this community having these conversations, bringing these things out in the open.”

McKenna also urges students to find someone on campus who is in an administrative position, faculty or staff member, or even a resident assistant who they trust to talk to about issues.
“I think it comes down to we need more allies,” said McKenna. “We need people to stand up against some of these behaviors and some of the words that are said. Even though they’re said in jest, I think that when you don’t represent that group of people you don’t know what it means.”

McKenna reinforced that the university has the students’ best interests at heart and is taking the proper steps to protect them.

“We want people to understand that we are taking this seriously and that it’s not representative of Mercyhurst core values. We have an obligation to all the students to keep them safe and keep them feeling safe. That’s our primary focus. We are about making sure you’re getting a quality experience and that’s why we did move quickly and take the actions we did at this point,” she said.