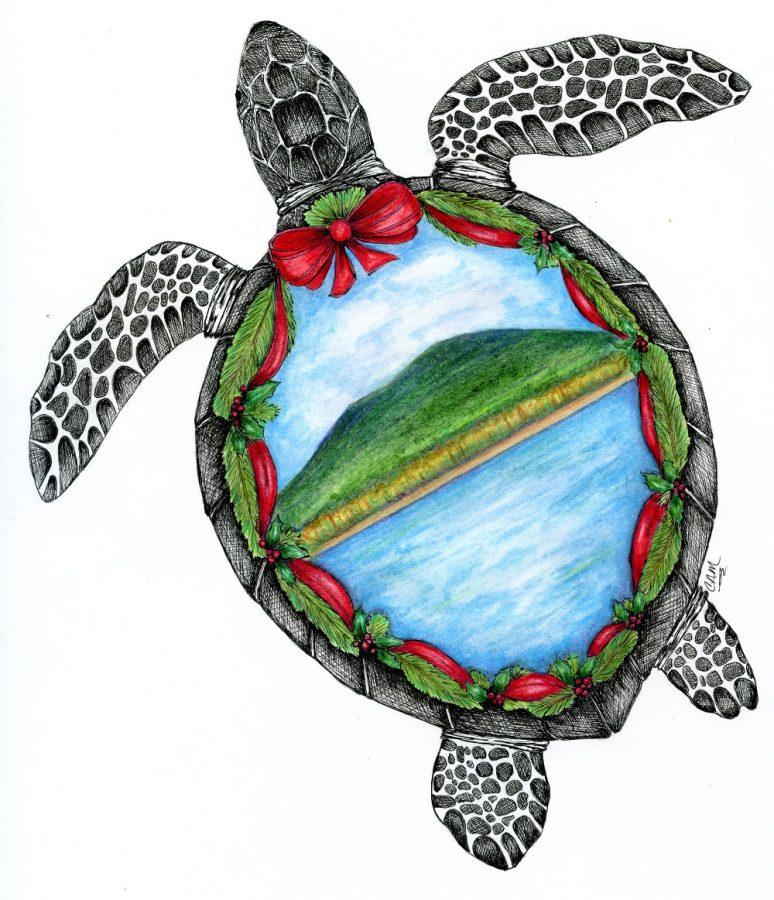 Mercyhurst alumna Christine Matha, ’89, was honored by the Sea Turtle Conservancy to design its 2016 Holiday Ornament after winning the group’s art contest in May. Matha was invited to the Tour de Turtle, an event held annually by the Sea Turtle Conservancy at the Four Seasons Resort on the island of Nevis in the West Indies.
Matha, of Erie, did not know what the Tour de Turtle was when she submitted her artwork to the contest.
“It is a program sponsored by the Sea Turtle Conservancy that was started in 2008,” said Matha. “At the event they capture the turtles and track their locations for three months via satellite tracking devices that are placed on their backs after they lay their eggs.”
During the 2016 event, the conservancy captured two hawksbill sea turtles and one green sea turtle. Participants at the Tour de Turtle also got to witness the hatching of a nest of leatherback turtles. Matha said she cannot believe that she was rewarded with this experience.
“I thought there had to be some sort of catch,” said Matha. “It was not until I actually spoke to the Four Seasons representative that I believed it. It still seems very unreal. I never expected anything but maybe a keychain. I woke my husband up to tell him, because I was notified in the middle of the night, and he was afraid he had done something wrong.”
Matha has always been interested in different forms of art because her father fostered her love for art from a very young age.
“My father, a fireman for the city of Erie, enjoyed art and would be responsible for watching me when my mother, a teacher at Iroquois High School, was working,” said Matha. “He would spend time drawing with me when I was very young. I remember not having the motor skills to make certain shapes, and it would frustrate me to the point of tears. I also took free community art classes as a child at the Erie Museum from local artists Fran Shanz and Shelly Barron.”
Most of Matha’s artwork outside of the Tour de Turtle contest is inspired by her Native American heritage on her father’s side.
“I come from Abenaki heritage which is a Native American tribe from Vermont,” said Matha. “I love to draw animals and incorporate intricate borders that resemble Abenaki beading that tells a story, styled after Eastern Woodland floral beadwork.”
Matha plans on continuing to submit artwork for the Sea Turtle Conservancy in the future.
“If they ever run another contest I will certainly submit an entry or design art for any of their fundraising. I will continue to do local shows through Presque Isle Artist Association, but I have no idea whatever roads I might travel down,” Matha said.
Her holiday ornament is a revised design of her winning artwork. This redesign was at the request of the Sea Turtle Conservancy.
“I was very honored and humbled to rework the design for their holiday ornament and I am so happy to share my work with the world,” said Matha. “It is surreal, actually, to know that people all over the world can have my art in their homes this holiday season.”