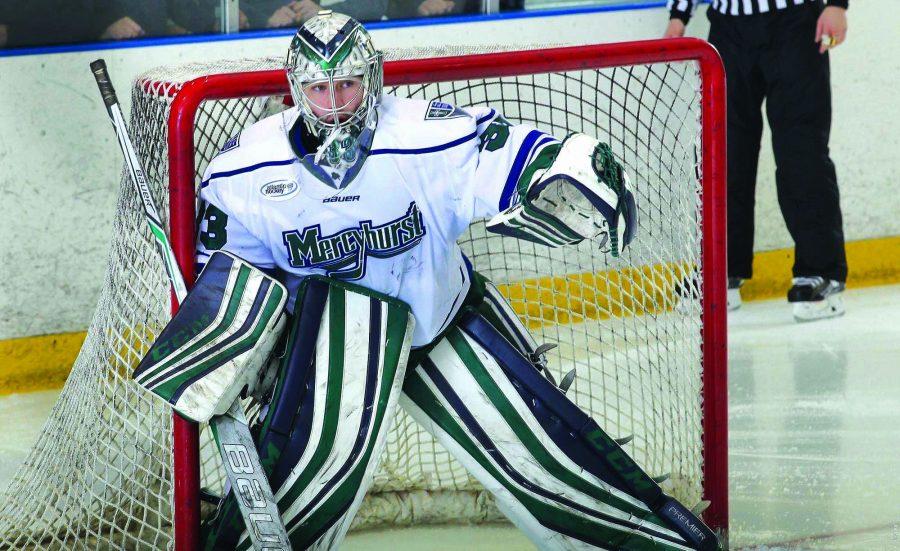 Five different goal-scorers contributed to the Mercyhurst men’s ice hockey team’s 5-1 victory over Canisius in Atlantic Hockey action on Nov. 25.
“It was a lot like the other games we’ve been involved in, the difference is that we found a way to win a close one,” Head Coach Rick Gotkin said.
Juniors Kane Elliot, Jonathan Charbonneau and Nathan Ferriero and freshmen James Anderson and Joey Duszak scored goals for the Lakers (5-8-0, 5-5-0).
Sophomores Jeremy Wu and Derek Barach tallied two assists apiece while redshirt junior Jack Riley, juniors Jonathan Charbonneau and Nathan Ferriero and sophomores Tommaso Bucci and Les Lancaster were also credited with assists.
Canisius’ (5-8-2, 4-3-2) lone goal was scored by Jesse Pereira.
Anderson scored his first collegiate goal to get the Lakers on the board first, assisted by Bucci. Bucci passed the puck to Anderson, who skated it to the net, took a slap shot and put it past Canisius goaltender Charles Williams.
Wu had the other assist on the goal.
Elliot scored his first goal of the season to put the Lakers up 2-0 early in the second period.
Riley and Wu picked up assists on Elliot’s goal.
Canisius came back with a goal of its own, which was scored by Pereira to bring them within one.
During the third period, Duszak and Charbonneau extended the Lakers’ lead to 4-1 with a goal each.
Duszak ripped the puck to the back of the net with a pass from Charbonneau at 6:56 to record his first collegiate goal.
Barach picked up the second assist.
Charbonneau then capitalized on the power play to put the Lakers up 4-1.
Charbonneau’s goal was assisted by Barach and Lancaster.
Ferriero picked up the empty net goal to give the Lakers their 5-1 win.
Mercyhurst freshman goaltender Colin DeAugustine saved 39 out of 40 shots he faced while Canisius goaltender Charles Williams stopped 20 out of 24 shots on net.
“I thought our guys played well. Colin DeAugustine played well in goal, a couple of freshmen got their first goals and some of our older guys went really big plays for us,” Gotkin said.
Both teams went 1-for-5 on the power play.
The Lakers have a weekend off before traveling to Fairfield, Connecticut on Fri. Dec. 9 and Dec. 10, for a weekend series matchup against Sacred Heart University.