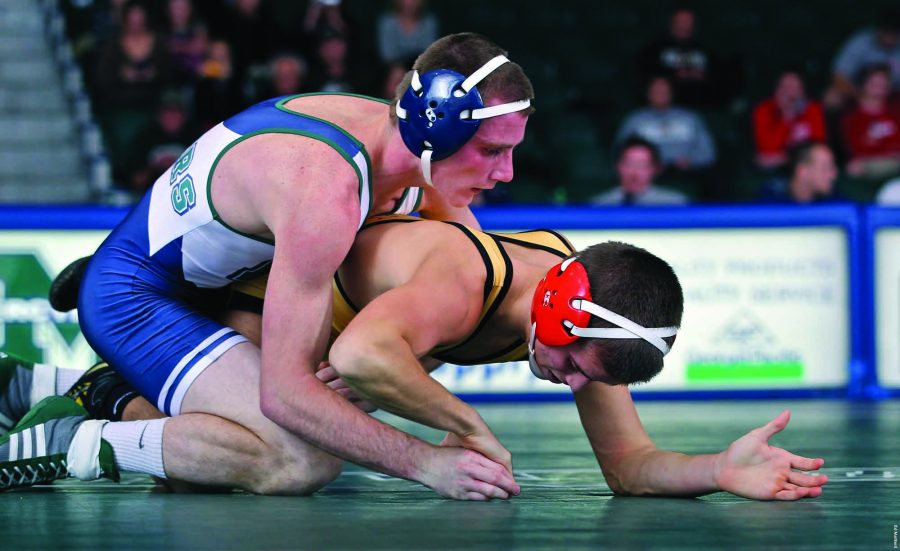 Mercyhurst provided another solid performance at the Findlay University Open. Five Lakers finished as medal winners and two walked out as tournament champions. Willie Bohince got his 100th career win.

On Nov. 9th, the Mercyhurst wrestling team competed at the Findlay University Open in Findlay, Ohio.
Competing alongside wrestlers from almost 20 other schools from throughout the area, the Lakers saw some great matches from their top talent. In addition to five of the Lakers finishing as medal winners, two more walked away tournament champions in their respective weight classes.
“It was a step forward,” said graduate assistant August Mizia. “It was a tough tournament, guys wrestled tough, and I’m happy with it.”
Mizia was also pleased that the younger members of the team got involved, and while not everyone walked away as a winner, it was a building moment for them.
The Findlay Open is the second tournament of the season for the Lakers and presented a chance for the team to get a preview of what’s to come in future tournaments and matches.
“There were guys from Division II … we got to see some guys from Wheeling Jesuit that will be in our region, there was Gannon … guys we will wrestle throughout the year” Willie Bohince said.
He added that the tournament is also a chance to see Division III competition and even Division I red shirts.
Bohince was one of the Lakers’ big performers at the tournament, finishing as the champion for the 125-pound. weight class. The tournament also marked Bohince’s 100th career win in his collegiate experience.
Senior Francis Mizia also claimed the top spot for the 165-pound weight class.
Commenting on his senior year, Mizia was confident. “It’s going how I expected… it’s what I train for,” Mizia said. Both he and Bohince have been the tournament champions in their respective weight classes in both the Mount Union Invitational and the Findlay Open.
They look forward to the NCAA championships at the end of the season, where they will compete for the top spots in their classes. The Lakers’ other place finishers came in a variety of weight classes.
Sophomore Logan Grass, seniors Michael Green and Jamar Henry and freshman Jacob Robb all finished in 8th place for the 149, 184, 197 pound and the heavyweight classes respectively.
Senior Andrew Welton came in second for the heavyweight class after a loss by decision in the finals.
The Lakers take to the mats next at Shippensburg University on Saturday. It is the first dual meet of the season for the team.
“It’ll be interesting to see how the lineup plays out,” Bohince said when asked what it will be like facing the PSAC rival.