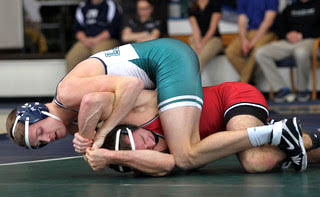 No. 1 senior Willie Bohince defeated John Pellegrino in a 9-8 double-overtime decision at 125 pounds.(Photo by Ed Mailliard)

In its fifth straight win, the Mercyhurst wrestling team beat fellow PSAC rival East Stroudsburg.
The Jan. 28 dual meet took place in the Mercyhurst Athletic Center. Mercyhurst won 29-14.
“A lot of good things happened,” said graduate assistant August Mizia. “They’re a good team; they’ve got some strong guys at ’25 and ’41.”
Laker graduate student Wes Phillips recorded a 12-6 decision win over his Warrior opponent in the 197 lb. to start the meet off.
Mercyhurst senior Willie Bohince added another win under his belt with a 9-8 tiebreaker against the Warriors’ John Pellegrino. Bohince initially was up 8-1, but Pellegrino clawed his way to a tie.
Both Bohince and Pelligrino are nationally ranked, with Bohince taking first place and Pellegrino 11th in Division II Wrestling.
The Warriors got on the board in the following two matchups, beating freshman Jeff Sisk in the 133 lb. category and junior Joel Bowers in the 141 lb. Freshman 149 lb. Freshman Logan Grass (149 lb.) then recorded a win against Blake Cohen of the Warriors by technical fall.
The Lakers received two more wins to round out their score with senior Francis Mizia in the 165 lb. and freshman Kevin Holman in the 174.
The Lakers were tied at No. 7 in the most recent NWCA DII poll, and are currently 9-3 for the season and are 4-0 in conference. Their next opponent is on Feb. 3 against Kutztown University.
“They’ve got good guys throughout their line-up; we’re going to have to wrestle really well to beat them, but that’s what it’s all about,” commented Mizia.
Lakers will host the NCAA Super Region I Championship on Feb. 24. National Championships will be held the weekend of March 10-11 in Birmingham, Alabama.
All remaining opponents for the Lakers are within the PSAC. “We’re still winning, we’re still in the race for the PSAC dual meet title,” Mizia adds.