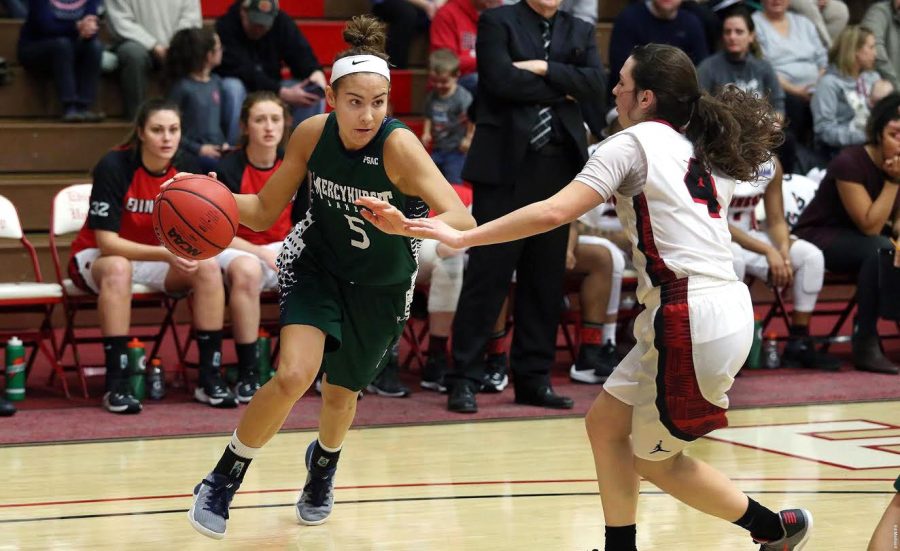 Sophomore Maria Lapertosa jumped off the bench to score 12 points against Edinboro University.

It’s not always the best of cases to cool off in sports. But when two flaming hot teams face each other, the one whose mercury shoots higher is bound to reap the benefits.
And for Edinboro, Head Coach Stan Swank he was able to use similar in-game runs to his advantage. A 19-9 third-quarter advantage helped his Fighting Scots rebound nicely from a snap in its recent 16-game winning streak and, despite a scoreless first half from leading scorer Katie Fischer, snatch a hard-fought 62-50 win over Mercyhurst on Wednesday (25) at the historic McComb Fieldhouse.
The win, the Fighting Scots’ 17th straight at home, allowed them to move to 17-3 overall and 13-1 in the PSAC, now a game back of No. 7 California for the top spot in the West after a road defeat on Jan. 28.
The Lakers, who have not won at McComb since 2001 but are still off to their best start since 1988, fall to 11-3 in the conference and 16-4 overall.
They are now a half-game back of Indiana for third place heading into their meeting Wednesday at the Kovalchick Complex, the Lakers looking for their 17th win for the first time since 1996.
“We knew we had to come back strong, and we really played well as a team, and our team defense was great tonight,” commented the Scots’ Michelle Jahn. “I think as any athlete, you don’t really let the losses affect you too much. You (need) to put them behind you and focus on the next game, so we were really focused at practice and it really helped us.”
After the two squads didn’t hit until 63 seconds into the contest and traded 11 points in the first quarter, General McLane product Jahn hit a three just 11 seconds into the second, sparking the Scots to the first seven points of the quarter as part an 11-4 run in the first 3:38 of the stanza.
The Lakers responded with a 10-3 spurt throughout the rest of the quarter as Jessica Bell had nine of her 11 in the first half, including back-to-back buckets with 1:30 left in the half to help the visitors close the deficit to one for the first time before the half.
The second half began eerily similar to the first, as Michaela Barnes hit two straight buckets—the second 3:10 into the third—as part of her 15 for the contest. The Lakers’ leading duo of former Seton-La Salle teammates Natalie Piaggesi and Angela Heintz clawed them even at 30 after Piaggesi—the team’s second-leading statistical contributor—finished a three-point play 5:13 into the period.
commented Jahn, who tied for the team lead with 15 on the night. “We just really [have] to work as a team and if someone needs help on defense, we are there for each other,” Jahn commented.
Richard’s players have split their last six games since finishing off an eight-game winning streak on Jan. 6, in Clarion, their three losses by a combined 24 points.
They look to leapfrog Indiana back into third place in the West on Wednesday, a 5:30 tip at the vaunted Kovalchick Complex.