AT fundraises for clinical symposium 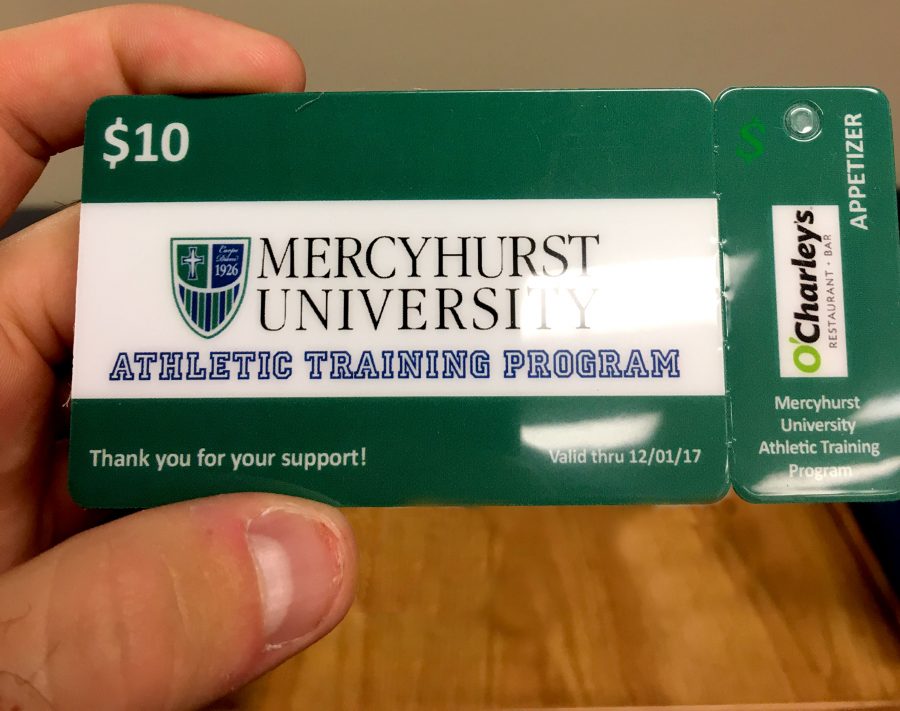 The Athletic Training students at Mercyhurst University are raising funds in hopes of attending a clinical symposium put on by the Pennsylvania Athletic Trainers’ Society. Because the Symposium is being held in Erie this year, it is an important opportunity for both students and the program to represent Mercyhurst.

“We want to give students the opportunity to get involved on a state and national level on a continual basis,” Scott Michel, Ph.D., assistant professor of Athletic Training, said.

The idea for the fundraiser came from Suzanne Gushie, the Athletic Training Education program director. It was introduced to students in a meeting on Jan. 19, where it became a truly student-run initiative.

The fundraiser involves selling coupon cards for $10 each. The cards have discounts for 20 restaurants, and they can be used every day until Dec. 1, 2017. The students tried to pick restaurants around the Erie area.

Also included on the card is a discount for O’Charley’s, which can only be used once.

The fundraiser will continue through the end of February.

Attending the Symposium provides an incredible opportunity for networking and making connections. It provides a way for the athletic trainers in Pennsylvania, as well as students from various schools, to help continue their evidence based education.

There will be sports medicine related lectures, research presentations, as well as a quiz bowl. Mercyhurst plans to enter a team in the quiz bowl — a competition between schools, where athletic training questions are asked.

Brooke Dicks, a junior Athletic Training major and Pre-Physical Therapy minor, is excited for the opportunity to represent Mercyhurst.

“It’s important for the program because we’re a school in Erie, and if we can get a bunch of people to go, it’ll show how good our program actually is,” Dicks said.

Steven Chica, also a junior Athletic Training major, commented on the importance of the symposium.

“It’s a great networking opportunity, as well as educational tool that is a great resume booster.”