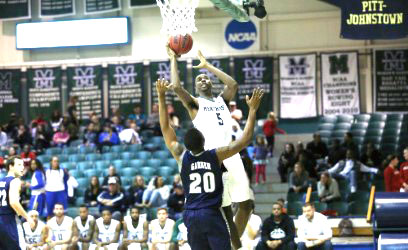 The Mercyhurst Lakers men’s basketball team came up victorious against the Clarion University Golden Eagles on Feb. 4.
The Lakers won 86-72 in a home game that saw three Lakers score over 15 points. The two teams previously met on Jan. 6, where the Lakers edged out 50-49 with a jumper from Junior Lorenzo Collier with four seconds remaining.
“There was a lack of focus toward the end. This game I feel we really locked in and kept the lead,” said junior Malcolm Walters, who scored 17 points on Saturday and hit all three of his 3-point shots.
The first half saw the Lakers and the Golden Eagles trade leads by several points several times for the first 10 minutes. Beyond the first 10 minutes, however, the Lakers built up an 11-point lead until the final four seconds of the half.
The Golden Eagles put up a layup to make the score 48-39 at the end of the half.
Into the second half, the Golden Eagles were able to cut the lead down to one point at the 14:18 mark. The Lakers suffered a bit of a dry streak during that period, but the team got it together and increased their lead soon after. At the end of the game, the Lakers were up, 86-72.
“We stayed in it,” said Laker senior Durrell McDonald, who scored 17 points and was 4 for 6 from beyond the arc.
“Offensively and defensively… we usually get discouraged a little bit like in the beginning when things weren’t going our way, but we stayed in it.”
McDonald highlighted rebounding as what contributed to the team’s success.
“I think that’s something that our bigs and guards had in mind a lot,” MaDonald stated.
The Lakers had 25 points in second chance opportunities off of rebounds. This made a difference due to the fact that the Lakers led the Golden Eagles 32-30 in points in the paint. Players coming off the bench also accounted for 29 points in the victory.
With the victory against the Golden Eagles, the Lakers improve to 9-11 overall and 7-9 in the conference.
The Lakers will be on the road next game, playing Slippery Rock University on Wednesday.
Slippery Rock won the previous Jan. 3, contest 49-46.
“They’re the number one leading offensive rebounding team in this league right now; they tried and hurt us with that last game,” Walters said.