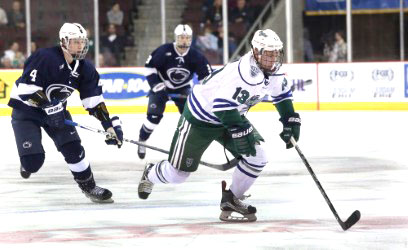 The hotbed that is Atlantic Hockey has been a tale of two sides of the standings. But just seven points separate fourth and tenth positions on the conference table, and a three-point weekend could not have come at a better time for C.J. Marottolo and his Sacred Heart team.
Vito Bavaro’s game-winner at 1:53 in overtime on Saturday propelled the Pioneers to a hard-fought 4-3 win after coming back in the third for a two-all draw the night before, spoiling a three-point weekend from Taylor Best and 63 saves from Brandon Wildung.
Now 4-7-2, the Lakers wasted a chance to move up in the standings, and are in a three-way-tie for fourth in the conference at an even 10-10-4 and 11-14-4 overall.
The Pioneers now sit just two points behind No. 8 RIT at 8-12-1 in-conference and 10-14-4 overall as a home date with top-seeded Canisius looms on Friday.
“The key was just to keep going. Eventually one’s going to fall, and once it did, we capitalized on our chances,” commented Bavaro after his tally on Saturday. “We need these points right now…and…that was the key, just knowing in the back of our heads how big this win would have been. A tie last night is good…but it’s definitely good to come away with a win.”
A back-and-forth affair went both ways after the teams exchanged goals and leads three times during the contest.
Kyle Dutra and Joshua Lammon both found equalizers for the home squad despite being out-shot 26-17 over the final 40 minutes of regulation.
After Jeff Carroll sent a slapshot from the left circle at 7:41 of the third for a 3-2 advantage, Lammon secured a +2 rating on the night after recovering a rebound from Matthew Whittaker off Brett Magnus, and beat him on the low side after a scrum in the crease nearly took the net off its support.
However, the call stood at 12:28 of the third for Lammon’s third tally of the season, sending the MIC into near-pandemonium.
But not to be outdone, Mitch Nylen posted a two-point weekend of his own, and found the visitors’ first goal with Tommaso Bucci in the box for a tripping call.
Sacred Heart ensuingly won seven of the next nine draws, as Erlich Doerksen tallied his fourth goal of the season
But the freshman from Sarasota, Florida was tagged for slashing just 27 seconds later.
The hosts seized their only power-play goal of the contest as Dutra found the wrap-around equalizer at 5:50 of the period, his sixth of the season.
Lammon had given the Lakers an early lead and was the first of six Lakers to record a point on the night after forcing a turnover and leaving the puck at the boards. He ensuingly screened Magnus in front of the net and allowed Best to deposit his eighth goal of the season.
On Friday, Laker Captain Jack Riley’s only shot of the first period beat Magnus off a wrap-around for his fifth of the season.
Nevetheless, after the Pioneers’ Justin Danforth was sent off for slashing 3:52 into the second, Zach Tsekos caught a turnover in his own zone after Nathan Ferriero won the initial faceoff, caught the puck at his blue line, and beat Wildung for his fourth of the season.
It was the eighth shorthanded goal the Lakers have allowed this season, tied for second-most in the country.
“I’ve been doing that move since I was young, so I knew right away what I was going to do when I saw I had a break-away,” said Tsekos. “We try to work on that, just bearing down. We weren’t getting too many chances at that point in the game, so obviously I wanted to capitalize and get our team back to an even game.”
A 12-9 second-period shot deficit couldn’t keep Best off the scoresheet for the first of two straight games, depositing a Whittaker pass to the top-right of Magnus at the 19-minute mark of the second.
Lakers took the lead, and did not relinquish until the tail end of a 12-for-13 third period for Wildung. But it was Danforth’s eighth of the season—and his fifth in six games—at 17:34 that stunned the 1,200 fans in the stands as Magnus went on to stop Jonathan Charbonneau on yet another breakaway as part of a clean five-save overtime to salvage the first point of the weekend for the Pioneers.
The Lakers now head to Bowling Green, Ohio, for a 5:05 p.m. date with the Bowling Green Falcons on Saturday.