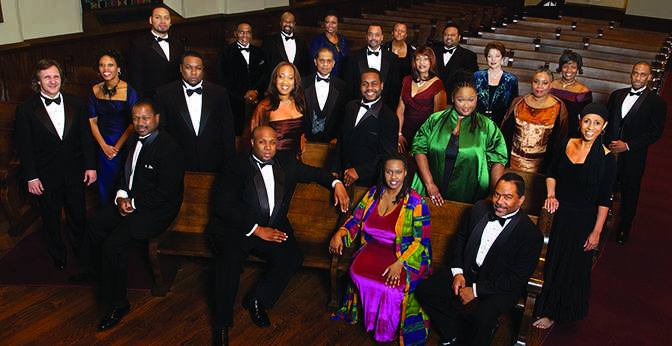 The American Spiritual Ensemble returns to Mercyhurst University on Feb. 18.

The American Spiritual Ensemble is a group of classically trained singers who want to keep the tradition of the American Negro spiritual alive.
The group was founded in 1995 by Everett McCorvey, D.M.A., and since then, audiences around the world have been delighted with their lively repertoire, which is anything from spirituals to Broadway numbers that focus on the black experience.
People around the world have experienced a little of the American Spiritual Ensemble because 90 percent of its members are accomplished soloists who have performed in theaters and opera houses throughout the United States, including places like the Metropolitan Opera, New York City Opera and Houston Grand Opera, in Italy, Germany, Britain, Spain, Japan and Ireland.
The cast changes with each tour as singers come in and out depending on other gigs.
Their sound is unique and cannot be duplicated.
It has been described as heavenly and divine.
Do not miss their performance on Feb. 18, at 7:30 p.m. in the Mary D’Angelo Performing Arts Center.
There will be a reception from 6:15 to 7:15 p.m. in the Cummings Art Gallery where the audience can meet the artists.
Admission is $10 per person.
There will be hors d’oeuvres, a signature cocktail, wine and beer.
There is limited availability and tickets are online or by calling 814-824-3000.
There will be a pre-show talk with “Erie’s Harry T. Burleigh: Pioneer Arranger of Spirituals” Jean E. Snyder, Ph.D., from 7:00 to 7:20 p.m. in Zurn 114.
This pre-show talk is free and open to the public.
The ticket prices to see the show will be $20 for adults, $15 for seniors and $10 for students and youth.
Tickets for the show itself are free for Mercyhurst students who show their ID at the box office and at the show.
The ensemble utilizes it profits from its tours to support projects such as ensemble CDs, of which they have two, or solo projects of group members.
Thanks to the support of  Kidder Wachter Jeffery, Construction LLC, Kidder Wachter Architecture & Design, and WICU, this performance has been made possible.