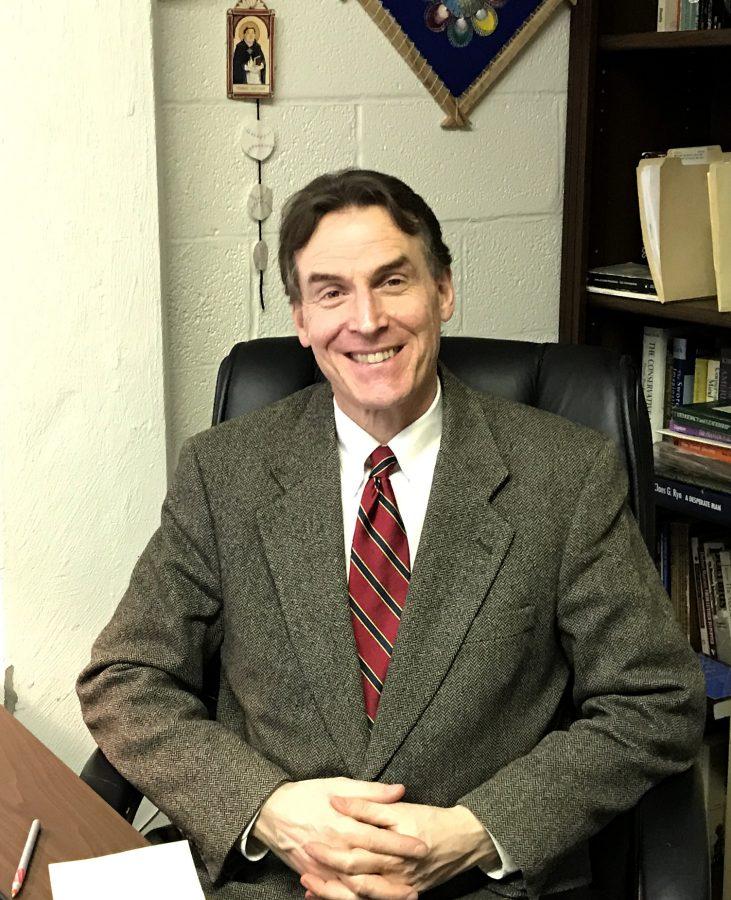 After 24 years at Mercyhurst, Michael Federici, Ph.D., professor of Political Science, will be leaving at the end of this year.
“I will be leaving. I got a better job at Middle Tennessee State University,” Federici said.
Federici will serve as the chair of the department of Political Science and International Relations at Middle Tennessee State University (MTSU), just outside of Nashville.
“I will still be teaching, but not as much. My load here is seven courses and there it will be three for the first year,” said Federici.
“I feel strongly that to be the best in scholarship I need to be constantly doing research and writing for publication. I’m always working on a book or an article. That’s where you get the fuel for the classroom. I’m going to MTSU because it provides me with a better balance of scholarship and writing.”
The relationship Federici creates with his students is very important to him. Before teaching at Mercyhurst, Federici taught at Concord College in West Virginia. However, with much larger class sizes he did not get to personally know his students.
“My favorite aspect of teaching is the routine interaction with students, especially in the classroom. You know your students better and they know you. You come to get things like their sense of humor. At the end of the semester, I’m sorry to see them go. That’s just not possible at a larger university,” Federici said.
Federici’s value for interaction with students is reflected in his teaching style.
“It is a partnership between faculty and student. I’m not just telling them the answers through lecture, but asking them questions, leading them to the point of discovery so that they are finding it on their own,” Federici said.
Thankfully, Federici will not lose this important aspect of teaching when he moves on to MTSU.
“One of the reasons why I accepted the position is the class sizes are the same as here,” Federici said.
Leaving Mercyhurst University was not an easy decision.
“First and foremost I will miss my colleagues in the Political Science department. And I will miss my students. Students come and go, but when you are the one leaving, like I am, you leave some behind. Normally, they leave you behind. As a college professor you see them grow and you get a sense of tremendous satisfaction when they graduate.
“I will also miss colleagues outside of the department that I’ve worked with my whole time here. We’ve been through some things together and friendships develop and it’s hard to leave them,” Federici said.
Federici also has strong ties to the Erie community.
“The work I’ve done has gone beyond the gates of Mercyhurst. I’ve done media analysis and somewhere around 1,000 interviews and that work has connected me to the community. It makes it difficult to leave,” Federici said.
After 24 years at Mercyhurst, Federici has grown a lot during his time here.
“Leaving after 24 years is a gut wrenching thing. When I got here I was a young 30-something-year-old scholar at the beginning of my career. I’ve changed a lot in the classroom and as a scholar during my time here. I have Mercyhurst to thank for giving me the opportunity,” said Federici.
Federici is still processing what leaving Mercyhurst and the Erie community feels like.
“I only accepted the position a week ago today so it’s still just sinking in. I haven’t had a lot of time to reflect,” Federici said.