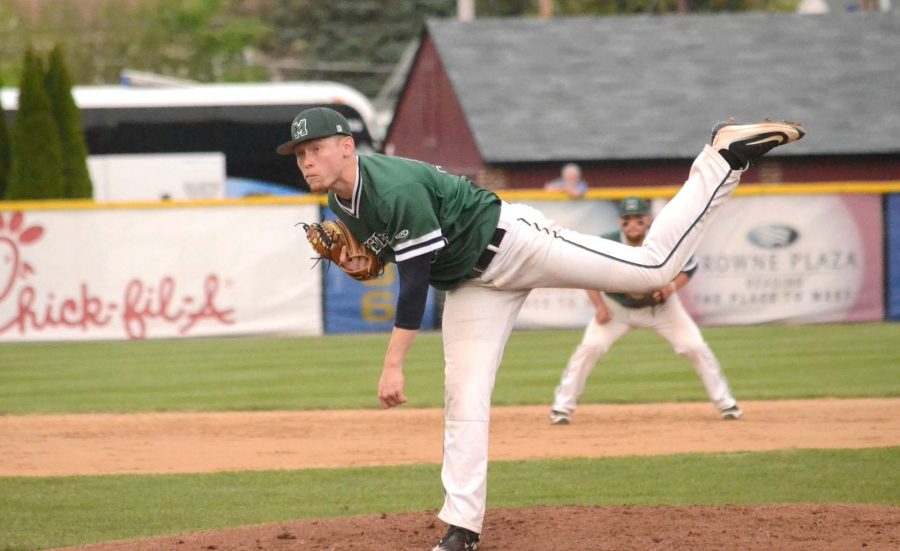 Junior pitcher Matthew Minnick earned the 2017 Pitcher of the year by the media outlet. The lakers also made into the NCBWA first team All-Atlantic region.

In the lead-up to the start of the 2017 season, Baseball America ranked Mercyhurst baseball team in a preseason poll as the seventh best finisher for Division II. Junior pitcher Matthew Minnick was named 2017 Pitcher of the Year by the media outlet.
Tampa landed in first place with Nova Southeastern Florida and Southern New Hampshire coming in second and third respectively. The poll ranked fellow PSAC East rival Millersville University fourth.
In their placing of the Lakers on the poll, Baseball America cited the Lakers’ .331 batting average, as well as the home run record that was set by the 2016 team.
In their statement on the Lakers’ prospects, they charged that Minnick “will have to dominate,” but also stating that his pitching in the low 90 mph range and his changeup would give him “a shot to do that.”
In addition to a high team ranking, the Lakers also made it onto the 2017 Top Draft Prospects list published by Baseball America. The Draft listed Minnick fourth on the list, senior infielder and outfielder Chris Gonzalez, 21st, and senior catcher Sabatino DiNardo III, 30th.
“It was exciting to find out I was chosen as the preseason pitcher of the year and the fourth prospect,” said Minnick. “It really only motivates me because as nice as it is to get that recognition, the awards that really matter the most are the ones earned after the season.”
Head Coach Joe Spano also spoke on the team’s behalf. Coach Spano has been heading the Lakers since 2000, and is beginning his 18th season. Last year, he and his team set a 43-win record for the 2016 season.
“It did not come as a surprise, we were reviewing similar rankings in other polls, obviously Baseball America is a prestigious poll because of the circulation of the magazine.”
On the subject of Minnick, Spano said, “Matt is a relentless worker, he’s a great teammate. He had a fastball that can reach the mid 90s, and when he’s on, he can throw four pitches for strikes. The fact that he’s left handed makes him a potential prospect for MLB scouts.”
The Lakers’ first two opponents were in West Virginia, where they played and won both games in a double header against West Virginia State University (13-7 and 2-0).
“It’s hard to evaluate the team so early in the season. February is extremely early for a northern team to play baseball,” said Spano. “We are fortunate to have won both games against such a good baseball team, but there were many parts of our game that will only improve with outdoor practice and games, and hopefully we will get outside more in the coming weeks.”
The Lakers lost their third game in the Mountain State to Glenville State College, 1-5, in Glenville, West Virginia, recording a 2-1 record for the weekend. The Lakers travel next to Holly Springs, North Carolina, to play the Post University Eagles.
Until March 21, the Lakers will be on the road. That date will be a home game against Notre Dame College, visiting from South Euclid, Ohio.