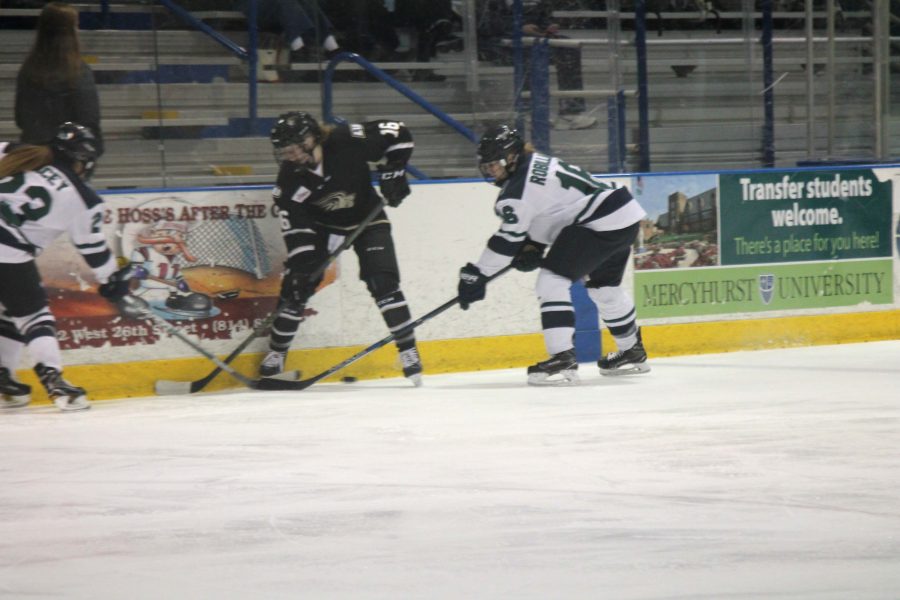 Mercyhurst women’s ice hockey team came off victorious as they faced Lindenwood University. The Lakers are still reaching for a top-three seed in the CHA conference tournament.

With the knowledge in the back of everyone’s head that the women’s ice hockey squad would not be able to get their hands on a first-round bye, it allowed the bright, young stars to play at a more relaxed tempo and play the style that has suited them well all season.
Now 13-0-1 when they put up three on an opponent, the Lakers are still in the running for a top-three seed in the CHA conference tournament after dispatching Lindenwood this weekend in two different fashions.
A combined line score of 8-3 saw everything come together for this team, as Maggie Knott won the contest on Feb. 19 with 1:29 left to play, while Senior Day saw the Lakers explode for four in the last two periods to send the seniors out on a high note.
Jillian Skinner, Bill Smith Award winner, commented, “It’s been great playing my last year with my best friends, and I’m excited for the next memories.”
The Lakers found themselves with a 39-10 shot advantage on Saturday that saw the assistant captain from Markham, Ontario, answer the bell with her sixth of the season at 17:19 of the first.
Knott and Rachael Smith found assists on the tally, the first of three power-play conversions in the contest.
The Lakers saw their other 16 first-period shots turned aside off Jolene deBruyn, but Megan Whiddon wouldn’t have any of it, finding a centering pass from Taylor Accursi and slapping her fifth of the campaign past deBruyn at 5:29 for the second of two Laker goals in 43 seconds.
It turned out to be Michele Robillard who caught a centering pass from Paige Horton just above the blue line and beat deBruyn over the left shoulder at 6:12.
They would get one back late in the period as Kirsten Martin found Cierra Paisley at 16:49 of the second to pull within two; the only of 10 shots to beat Sarah McDonnell (5-8-1) as she narrowly missed her second shutout of the campaign.
Samantha Fieseler and Céline Frappier teamed up to screen deBruyn off to her left, opening up Jennifer MacAskill to slap home her fourth of the campaign.
The junior out of Auld’s Cove, Nova Scotia finished off the Lions just 4:11 later, capitalizing on Otte’s second penalty of the game. MacAskill’s fifth of the season was more than enough to defeat deBruyn’s 34 saves.
The previous afternoon, Nicole benefitted from six successful penalty kills against a Lindenwood team that has scored the second-fewest power-play goals in the nation but also entered the weekend having allowed the fewest in the conference.
The Lady Lions gave Jessica Convery all she could handle, with Sarah Bobrowski finding her first of the season at 6:48.
Yet just 39 seconds later, Ally Larson provoked an interference, the second and final man-advantage of the day for the Lakers, paying off as Sarah Robello and Sarah Hine found Hartwick for her team-high 16th of the season.
A 12-4 shot deficit in that second period, however, could not prevent the visitors from finding an equalizer.
Another freshman, this time Courtney Ganske, found her fifth goal of the season at 12:48.
Meanwhile, the last of Knott’s 11 faceoff wins set her up nicely after Smith found MacAskill behind deBruyn.
With the Lions smartly breaking up the receiving end of most pass attempts, the freshman out of Smiths Falls, Ontario, headed directly for the sophomore goalkeeper and redirected her fifth of the season past deBruyn, who couldn’t turn it into 22 stops on the afternoon.
“I think we were spreading out along the ice a lot so we were able to break past their defense and throw it up the wall,” Knott said after Friday’s 3-2 win.