Hess wowed the crowd at his recital 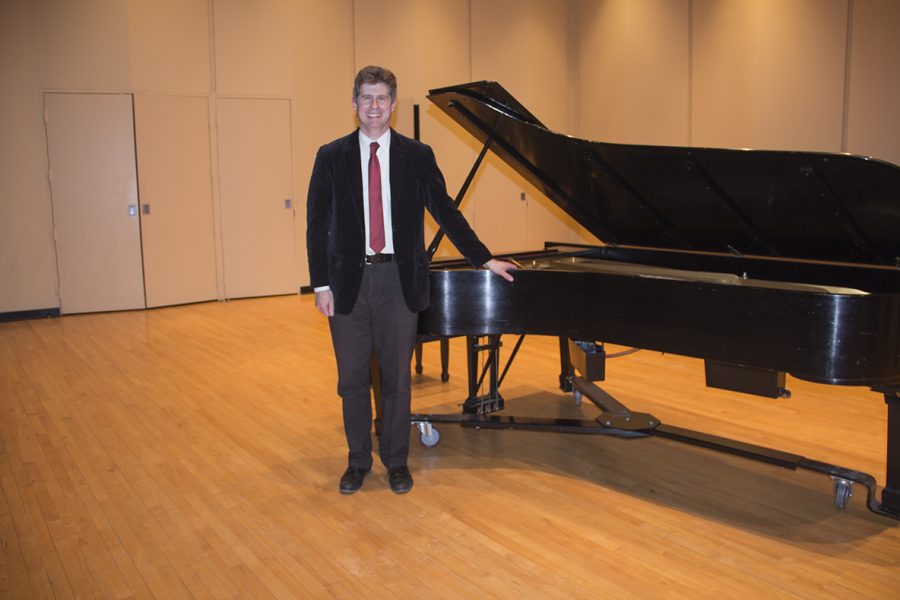 March 15 saw the delightful execution of the piano recital of Nathan Hess, D.M.A.
Those who have followed the faculty recital series would have recognized Hess, who plays a prominent role in his colleagues’ recitals, but it is a rare treat for the Mercyhurst community to see Hess perform a solo program.
Hess began with Wolfgang Amadeus Mozart’s “Sonata in B-Flat Major,” a piece written by the composer at the age of 19 that features a balance between playfulness and formality.
It was beyond a doubt the lightest piece of the evening, and the choice to play it as the precursor to the darker works on the program was inspired.
In starting with a piece written during a great composer’s youth and then turning to pieces written by other composers at more mature times in their careers (ending with a piece written by Robert Schumann during a time of great frustration), Hess’s program, whether intentionally or otherwise, outlined a bildungsroman (or saga) of sorts.
The second piece, Frédéric Chopin’s “Barcarolle in F Sharp Major,” highlighted the dreamlike quality Hess’s playing can take on.
In the program notes, it was mentioned that the piece is meant to sound vocal, and Hess did a fine job of playing the melody as it might sound as a vocal line.
The most striking part of the performance, however, was the ferocity that Hess demonstrated several times during the piece, summoned from seemingly nowhere, and then just as quickly faded into a gentleness—almost a tenderness—reminiscent of the flowing water the piece’s title invokes.
The first half ended with another piece by Chopin, his “Ballade No. 3 in A-Flat Major.”
It began gracefully, with an unapologetically sweet melody in the right hand accompanied by a left hand that seemed to drive most of the changes in dynamics and tempi.
As it progressed, it took on a more manic character, but it never completely seemed to lose itself.
Controlled even in the piece’s intense, almost chaotic, passages, the Ballade showcased Hess’s command over the instrument and the music as he drew back to bring out the dulcet melodies as they appeared.
Its abrupt ending was certainly a dramatic conclusion to the first half of the recital.
His final piece, which took up the entire second half, was Robert Schumann’s “Fantasie in C Major.” Hess spoke to his audience for the first time during the evening, explaining that Schumann had taken two themes from pieces by Beethoven and inserted them into his Fantasie.
Hess demonstrated both at the piano and enthusiastically invited the audience to listen for them. The passion and the skill in the playing—the presence of both adding something new and exciting to the work—were such that it took conscious effort not to applaud between movements.
When watching Hess perform, one is faced with the hard choice between focusing on his hands or on his face.
Naturally, the hands are a point of interest as they fly across the keyboard, but his facial expressions cannot help but draw the eye.
He nods to himself, shakes his head emphatically and bobs his head as he tilts one ear to the piano.
With such animated expressions passing over his countenance, one cannot help but wonder what he thinks about when playing, or if he is so lost in the music that he is not thinking of anything at all.
The entire recital was a success, with the performer’s taste in both his choice of pieces and their execution captivating the audience.
The different selections complemented each other well and showcased the different elements of virtuosity at Hess’s command—not the least of which, perhaps, was his ability to play the entire program with his eyes closed.
Across the board, Hess’s performance of each piece was marked by a masterful control of dynamics and the ability to elicit different tonal colors through the way he expressed contrasting moods.
The most wonderful part of the performance was that Hess never sacrificed the beauty of a piece for impressiveness, and as a result every piece was all the more impressive for its beauty.