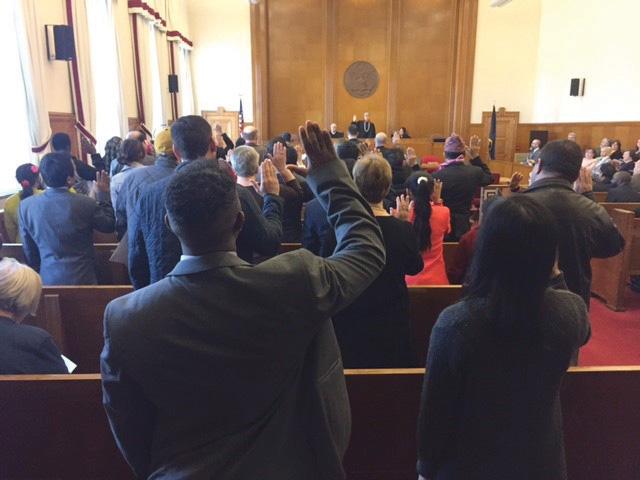 On March 8, 45 immigrants from 19 different countries took part in a citizenship ceremony at the Federal Courthouse in Erie. Some Mercyhurst staff and faculty were present for the event, as part of the Mercy Emissaries.

“The Mercy Emissaries are a group of employees (faculty, administration and staff) from the Erie and North East campuses who have committed to learning more about the history and charism of the Sisters of Mercy, of the University, of Catholic Higher Education, of Mercy spirituality and of the works of mercy and the critical concerns of the Sisters of Mercy,” said Greg Baker, director of Campus Ministry. “While we had 10 employees and one student this time around, our goal in the future is to heavily involve students in these events, through classes, Beyond the Gates credits and other campus groups.”

39 employees were trained during the first year-long program, and an estimated 28 more are in training this year. The Mercy Emissaries were the first group to support and witness these ceremonies, but getting involved is a university-wide initiative.

“We will be involved with many more in the months ahead, as there is usually one ceremony in Erie each month,” Baker said.

“We know that at least three of the new citizens at this one ceremony had strong Mercyhurst connections,” said Baker. “There was one current MU student there, originally from Tanzania, one employee, originally from Bosnia, and one former student, a 2010 graduate from Russia.”

The ceremony started out with a presentation of the U.S. flag by a local high school’s ROTC. Then the immigrants denounced all citizenship ties to other countries, which is a requirement in the United States, and took an oath of citizenship. Other people, including Baker, spoke at the ceremony to offer words of welcome and encouragement for the journey that lies ahead for the new citizens.

“The ceremony was solemn, celebratory and very moving. I could see what a triumphant moment this was for many of these new citizens, many who originally came to the U.S. as refugees fleeing quite horrific conditions of violence, unrest and poverty,” Baker said.

One judge even talked about being the child of an immigrant herself.

“This was an incredibly positive event to celebrate what the U.S. has been about since its inception, offering a haven for opportunity for people from various countries,” said Baker.