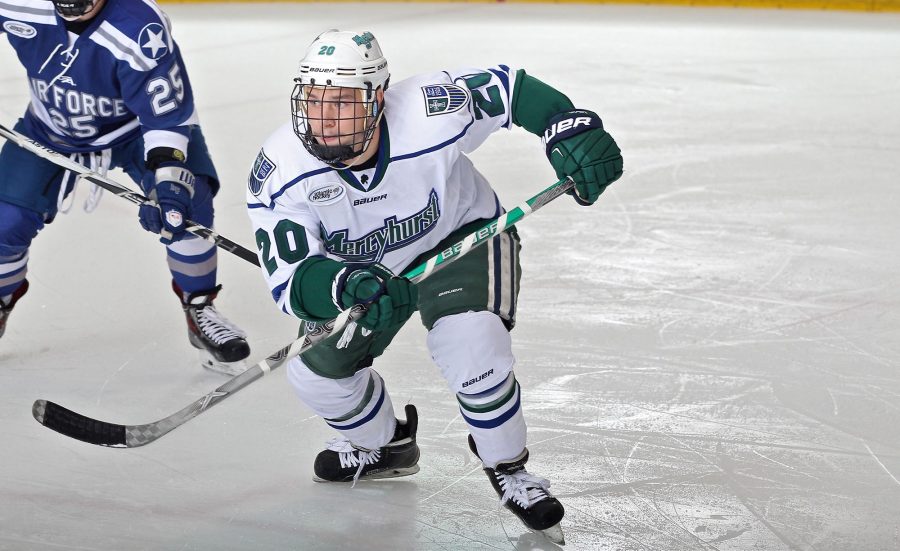 Senior Stephen Hrehoriak had seven goals and three assists for ten points for the 2016-17 season. Hrehoriak will be trying out with the professional level Pensacola Ice Flyers of the SPHL.

Mercyhurst senior Stephen Hrehoriak has signed a three-game tryout deal with the Pensacola Ice Flyers of the Southern Professional Hockey League. The Ice Flyers have two games left in the regular season.
“It’s exciting to be given a chance to play professionally, no matter the level,” said Hrehoriak. “I’m excited to get down to Florida and get started.”
Hrehoriak, a native of Stittsville, Ontario, scored seven goals and added three assists for 10 points in 34 games in 2016-17. Two of his seven goals were game-winning tallies.
Hrehoriak held a three-game point streak in late January, recording two goals and one assist during a stretch in which the Lakers went 2-0-1.
In four years as a Laker, Hrehoriak played in 111 games while scoring 14 goals and tallying 12 assists for 26 points.
During his freshman season, Hrehoriak recorded six goals and 13 points in 40 games. He tallied three game-winning goals, which tied him for team lead. He recorded six points in the last eight games of the season after scoring seven in the first 32 games.
During his sophomore year, he picked up two assists and three points. His lone goal came during the Atlantic Hockey Tournament semifinals. During his junior season, Hrehoriak played in 10 games, blocking two shots.
Hrehoriak played his three games with the Ice Flyers on March 31-April 2. During those three games, he recorded two goals and one assist for three points. His first pro goal came during the Ice Flyers’ 5-2 win over the Knoxville Ice Bears.
Hrehoriak will be joining two Mercyhurst alumni in the SPHL: Dan Bremner ’09 (Peoria Rivermen) and Spencer Bacon ’16 (Columbus Cottonmouths).