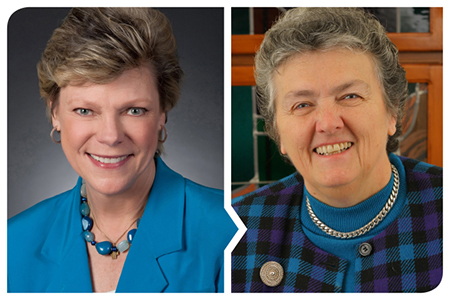 Cokie Roberts (left) and Joan Chittister will speak on April 25.

On April 25, at 7 p.m., Cokie Roberts and Joan Chittister, OSB, will be taking the stage at the Mary D’Angelo Performing Arts Center and speaking as the third lecture in the Joan D. Chittister Lecture series.

Chittister, a sister of the Order of Saint Benedict, is the author of over 50 books, and the release date of her latest, “Radical Spirit: 12 Ways to Live a Free and Authentic Life,” coincides with the date of the lecture, and will be available for purchase after.

Chittister, ’62, has appeared at Mercyhurst several times as part of the lecture series. Notably, she is the namesake of The Helen Boyle Memorial Archive in Honor of Joan D. Chittister, OSB, housed in the Hammermill Library. It is made possible by an endowment from the family of Helen Boyle, Chittister’s fellow Mercyhurst graduate and longtime friend.

Roberts is a political commentator who has worked for ABC News and National Public Radio. She has received many honors for her works, including three Emmys and an induction into the Broadcasting and Cable Hall of Fame. She focuses on the history of women in the United States.

A mark of the fame and appeal of these women is that the 800 tickets for the event sold out within an hour of becoming available.

Roberts was invited to Mercyhurst in 2016, but because of the presidential primaries was unable to speak. Mary Hembrow Snyder, Ph.D., a professor of religious studies and theology at Mercyhurst and Coordinator of the Joan D. Chittister, Lecture Series, said that this may be for the best.

“Given all the neuralgic issues that have presented themselves in the light of the election of Donald Trump to the presidency,” said Snyder. “There’s a lot of controversy; a lot of fear, too.”

Snyder emphasized Robert’s balance as a political commentator, which puts Roberts in an excellent position to address this national tension.

Generously, Roberts has donated her speaking fee to charity, and it will be divided between the Mercy Center for Women and the Joan Chittister Fund for Prisoners. Attendees to the lecture will also be invited to make donations.

“I think it’s going to be a rich evening. I’m so excited,” said Snyder.