Baseball racks up four more wins for the season against Clarion U. 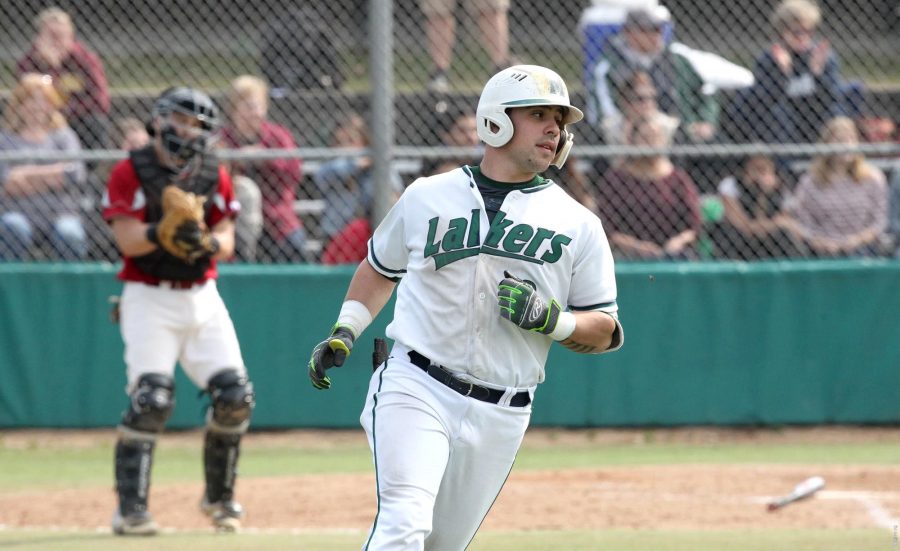 Junior Jimmy Latoma had the game-winning single that the Lakers needed to best Clarion, 2-1, in the fourth contest during the April 14 and 15 double-header series.

Adding to what has been a stellar season so far, the Mercyhurst Lakers baseball team put up four more wins in back-to-back double-headers against Clarion University on April 14 and 15.
“The team played very well overall. It was a team effort the entire series,” said Head Coach Joe Spano. “In two of the games the offense really exploded and in the other two games the team relied on good pitching and defense.”
Double-header number one’s first game fit that former description, with the Lakers soaring above the Golden Eagles with a 16-0 route.
Game two was closer, with the score tied until the seventh-inning. The final ended up being 6-2, Lakers.
“The pitching and defense was outstanding all weekend,” said Spano. “I was really impressed with Jamie Lauria, who came in relief game two with the game on the line and worked out of what seemed to be an impossible situation. He seemed unfazed by the situation and helped us come away with the win.”
The second double-header was played at Mercyhurst and saw two more games that ended up being similar to the first two. Game one was another double digit win, with the Lakers coming away with a 15-4 victory.
Game two of the second double-header was the closest of the series, with the Lakers eking out a run in the seventh to come away with a 2-1 win to wrap up the weekend.
“So far I really like how our guys play together as a team and I like that they are friends on and off the field. I think good team chemistry can make a good team great, and I really like the chemistry of this team” Spano said.
The Lakers currently sit with a stellar 27-2 record (.931) and a 15-1 conference record. For Division II Baseball, the Lakers topped the power rankings for week one (April 5).
“I thought it was nice for Mercyhurst University and it was nice for our players and their parents,” said Spano on the recognition. “Everyone has worked so hard and for friends and family and alumni to see that ranking it gives everyone a great deal of pride in the program. As a coach, the only poll that matters is the last one, and it’s a dream and a goal to be ranked No. 1 at the end.”
The Lakers came in second in the April 11 National Collegiate Baseball Writers Association (NCWBA) rankings, moving up from their previous spot at fourth. Only North Georgia, who came up from fifth, was above the Lakers.