No. 14 Women’s LAX bests Bloomsburg to keep up in PSAC 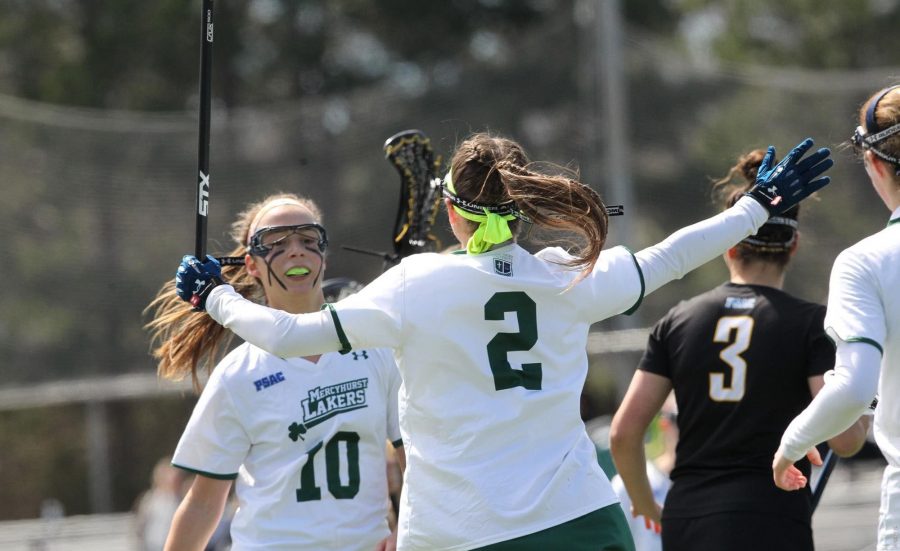 Junior No. 2 Taylor Izzo and Senior No. 10 Carly Zimmerman celebrate during Saturday’s game against Bloomsburg University. Zimmerman led with six goals and Izzo three in the 13-5 win.

Praise be to the King of Kings! No? Why not?
The PSAC title is still within reach for Kevin Cooke, who is in his first season as women’s lacrosse coach.
The No. 14 Lakers pitched a first-half shutout against Bloomsburg on April 22 at a chilly Tullio Field. The final score was 13-5, Mercyhurst.
The Lakers (9-4, 7-3), who fell to No. 17 in the most recent Intercollegiate Women’s Lacrosse Coaches Association poll are still mathematically alive for a share of their second-straight PSAC regular-season title.
The Lakers were able to shake off tough losses in East Stroudsburg and Indiana, and regained their early-and-often attack from their six-game winning streak earlier this season.
Kristin Anderson’s 21st goal of the year at 7:19 sparked off a stretch of three goals in 55 seconds. It was the13th time this season the Lakers have scored three goals in a span of less than two minutes. Zimmerman followed suit 32 seconds later, ensuingly followed by Taylor Izzo’s 18th 23 seconds after that to bust out a four-goal lead.
However, the Lakers were far from done, adding two more each from Izzo and Zimmerman, Janelle Williams’ 34th at 21:11 and Catherine Meegan’s sixth with 3:02 left on the first-half clock.
The Huskies (8-7, 5-6) gave the Lakers a taste of their own medicine, opening the half on a 3-0 run. The Huskies won the half in ground-balls (8-5), shots-on-goal (10-9) and turnovers (6-9).
Cailyn Gormley found her 15th of the season on the free-position at 8:56 before Brigid Kyne—the Huskies’ leading goal-scorer at 32—and Lindsey Coyle combined to beat Gabby Gravino twice in 1:53 to pull within seven.
This would be as close as the Huskies would get as Zimmerman found Morgan Parker for her second of the season, and Zimmerman later caught passes from Izzo and Lacey Netti to beat DiPasquale twice in 50 seconds.
Hannah Jaskuta’s tallies 2:08 apart wasn’t nearly enough as the Lakers handed Bloomsburg the loss.
The Lakers return to action today, April 26 when Slippery Rock arrives at Tullio for a 4 p.m. battle. The Pride sit a half-game in front of Seton Hill (9-7, 6-5) for the fifth seed in the PSAC. Lock Haven is only a game behind (8-7, 5-5).
Bloomsburg remained below the red line with the loss to Mercyhurst, and would be eliminated alongside Millersville with a Lock Haven win over the Marauders April 26 at Charlotte F. Smith Field.