New students, transfer students and even some upperclassmen looking for a new way to get involved filed into the Herrmann Student Union to learn about the opportunities on campus this school year.

“Students definitely need to be involved in college, and one way to do that is to join a club,” freshman Victoria Gricks said. Gricks joined the Snowboarding and Yearbook clubs because she was involved in both clubs during high school.

Students who were not very involved during high school also decided to join clubs at Mercyhurst.

“I wasn’t very active in high school, and in college, I want to be more active in school activities and clubs,” freshman Amanda Stafford said. Stafford signed up for the History and Theatre Appreciation clubs.

RSCO representatives had the opportunity to speak with interested students by making use of the crowds circling the many displays.

“There’s been quite a turn-out this year,” Ski Club representative Carey Pelletier said. “There’s certainly a nice variety of clubs. The fair’s grown nicely through the years.”

Pelletier said that in past years, booths at the fair had been set up only in the Student Union’s Great Room. This year, several booths, including the Ski Club booth, migrated upstairs as well, “and it’s pretty crowded up here, too,” Pelletier said.

The Ski Club had signed 15 new members about half an hour into the two-hour event. Other clubs showed similar results.

For students who could not attend the RSCO Fair, additional information on Recognized Student Clubs/Organizations is available in the Student Union and on the Mercyhurst Web site. 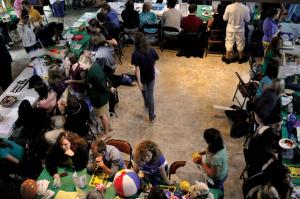