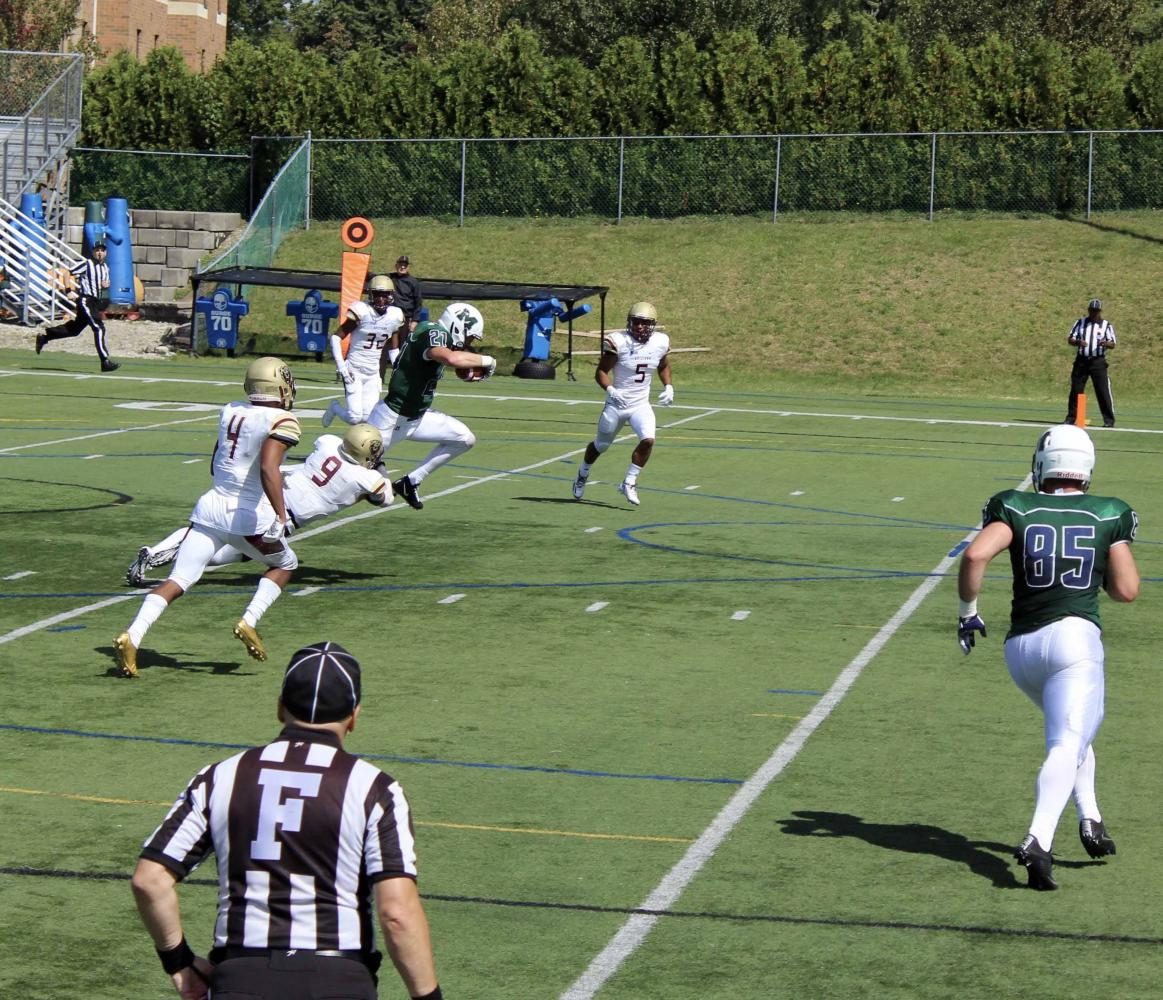 Redshirt Laker freshman running back Garrett Owens moves the chains with a run into Kutztown territory.

Despite out-rushing the Kutztown University Golden Bears, the Lakers recorded as many first downs as points, spoiling another solid outing from Marty Schaetzle’s defense.
The Sept. 9 loss was the PSAC opener for both teams.

Laker quarterback Doug Altavilla was succinct in his thoughts.  “We just have to buckle up and capitalize on those opportunities.” Altavilla said.

The Lakers got off to another fast start on Saturday, replicating and then superseding their previous opening against Hillsdale.  Holding the football for more than 13 minutes of the first quarter, Altavilla completed three of his first four passes, one for 17 yards to Brad Novak and to E’Andre Smith. Smith had the first big play of the afternoon, finding a hole on second down for a 24-yard rush to the Kutztown 31.

Two plays later, Altavilla found Novak again for 16 yards to the nine. However, the 11-play, 73-yard opening drive stalled at the six after two incompletions, leaving kicker Mark Shafer to connect a 23-yard field goal. The Lakers were up 3-0 in the first for the second week in a row.  After forcing Golden Bears quarterback Collin DiGalbo three-and-outed on his first possession, Altavilla converted five of his first seven passes on the ensuing drive.  Smith added a 12-yard run from his own 21 to piston the drive. Smith totaled 96 yards rushing on 21 carries.
Seven seconds into the second frame, Altavilla punched in his first touchdown of the day.  The Golden Bears’ Reynolds responded with the biggest play of the contest, ending the first quarter with a connecting with DiGalbo and heading straight down the left sideline for a 57-yard touchdown.  Reynolds finished with eight receptions for 125 yards and two scores via pass.

Reynolds was responsible for all three scores, including what proved to be the game-winner at 7:47 of the third to cap off a 16-play, 71-yard drive that took more than 7½ minutes off the clock.
After he converted on a 3rd and-3 from his own 49 with an 8-yard run, DiGalbo found Conor Sullivan and Josh Lee on consecutive plays for a combined 41 yards. This brought the offense to the Laker two, where Reynolds scored two plays later.  Reynolds and DiGalbo combined for the first nine plays of the drive to reach the Laker 35, but an illegal block handed the Golden Bears a second-and-19 from the 48.

Two plays later, DiGalbo found Sullivan for 27 of his 268 yards passing, as he accounted for all but five net yards on the entire drive.  Reynolds finished this with a score, six plays later for his third touchdown of the day.  DiGalbo previously faced long first-down conversions, converting a first-and-23 in two plays on his ensuing possession after facing first-and-25 before connecting with Sullivan. Twice in the final quarter, a fourth-down pass to Nate Harka fell incomplete, twice giving Altavilla an opportunity to bring his team back.

It worked the second time, running off four straight completions after a 15-yard run from Garrett Owens. This brought the Lakers to the Golden Bears’ 25.  After getting sacked on fourth-and-1 in the second quarter, this time Altavilla converted both fourth-down opportunities, making up for 8-16 on third-down. He first found Theophilus Blackston from his own 43 for a 23-yard gain.  Altavilla then connected with Danavius Clay on a 4-yard gain to the Kutztown 21.  Altavilla was sacked for the third time two plays later. Despite this, he found Owens up the middle for 27 of his 192 yards passing on the day and his only touchdown through the air. Clay ran the conversion, but was prevented by the Golden Bears’ Jhaloni Johnson.