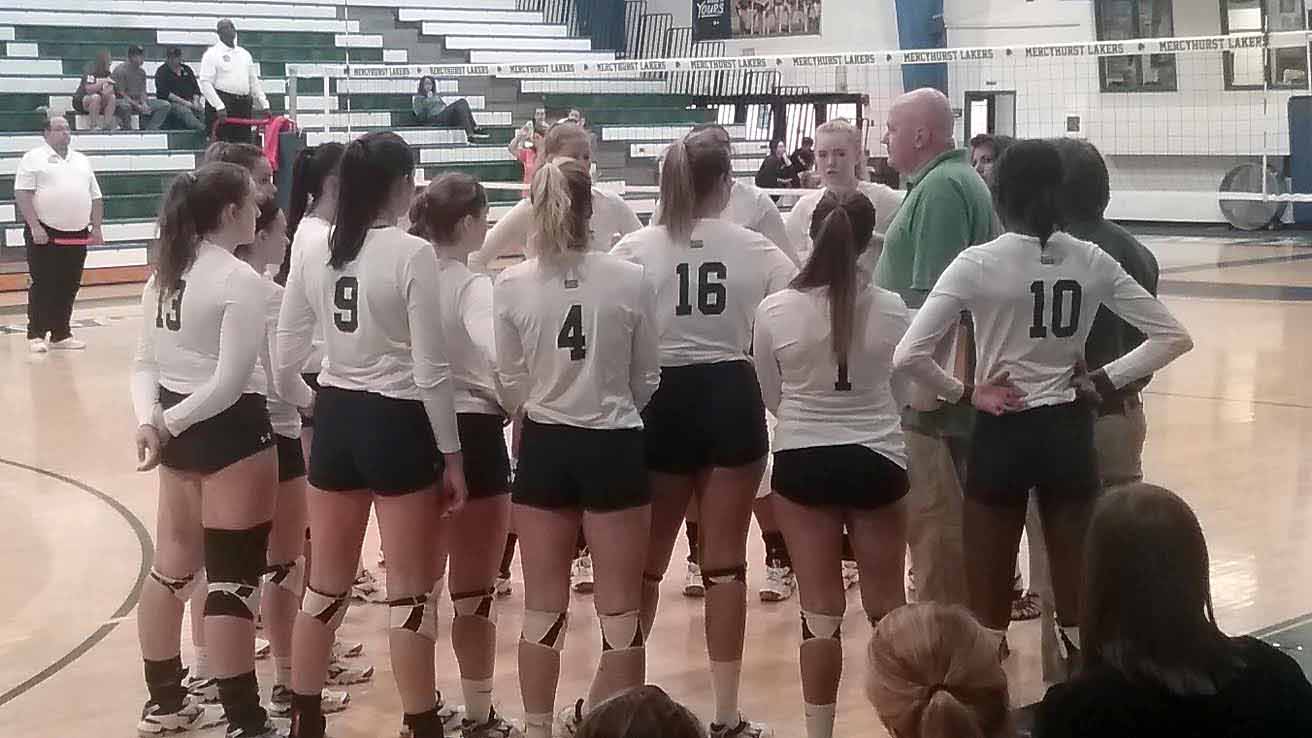 Lakers volleyball Coach Ryan Patton speaks with the team during a timeout. The Lakers competed against four different schools over the span of Sept. 8-9.

The Mercyhurst women’s volleyball team made a dramatic start in an equally dramatic tournament for the Sept. 8-9 Mercyhurst-Gannon Tournament.  The tournament marked the first time that the Lakers have been at home for this season.  In their first game of the tournament, the Lakers faced off in a tough match against the University of Findlay Oilers.  “Findlay is probably a Top 25 caliber team,” said Laker Coach Ryan Patton.

Mercyhurst lost 18-25 for the first two sets of the Friday night game. However, the Lakers were noticeably more aggressive in the second set.  The second set became heated quickly with Mercyhurst scoring two points in the first two minutes alone.  The third set was the most intense of the entire match, and was won by Mercyhurst.  Throughout much of the third, the score remained close between the Lakers and the Oilers.

At one point, the Lakers were one point behind Findlay (6-7). This led to an extremely dramatic and exciting fight by the Lakers to get the score to a tie.  Toward the end of the third set, Mercyhurst was able to hold off Findlay and win the set with a score of 25-20.  However, the Lakers lost the fourth set and the game.  “We were initially intimidated by (Findlay), but then we started talking and trusting one another and it showed on the court,” said junior Alyssa Kling.  Later that evening, the Lakers faced off against Saint Michael’s College, and soundly defeated them with a score of 3-0.

The Lakers next faced off against Glenville State College the following morning. This game, like the two preceding games, was an exciting match.  The Lakers beat Glenville with a score of 3-1. Sophomores Alyssa Zirnheld and Katie Baird scored ten and six kills for the Lakers respectively.  Kling also posted an additional six kills to round out the top scorers. Freshmen Madisyn Jones and Hannah Vuylsteke recorded the most digs with 12 and nine each.

The Lakers next faced off against Hillsdale College, losing 3-0.  Sets one and three were close and competitive with a final of 22-25 for both. In the second set, the score was 16-25. Chesko and Kling led the Lakers in blocks, posting four and three respectively.  Vuylsteke also led the Lakers on the defensive side with 16 digs.

Patton commented on the past season, saying “It was pretty average, and left it with a lot of what it is we want to rectify this year.”  Patton also added that a goal for his team this season is to make it to the playoffs.  “I think our team is well focused on the day to day and getting better,” he said.

After the last game, Patton said that he believes the team has made progress and will do so again next week.  “This team showed a lot,” said Patton. “We have some good things going on.”
His team is now 2-6 for the season and has yet to play a PSAC opponent.  The Lakers take to the court next when they travel to South Euclid, Ohio, for the Notre Dame (Ohio) tournament on Sept. 15-16.