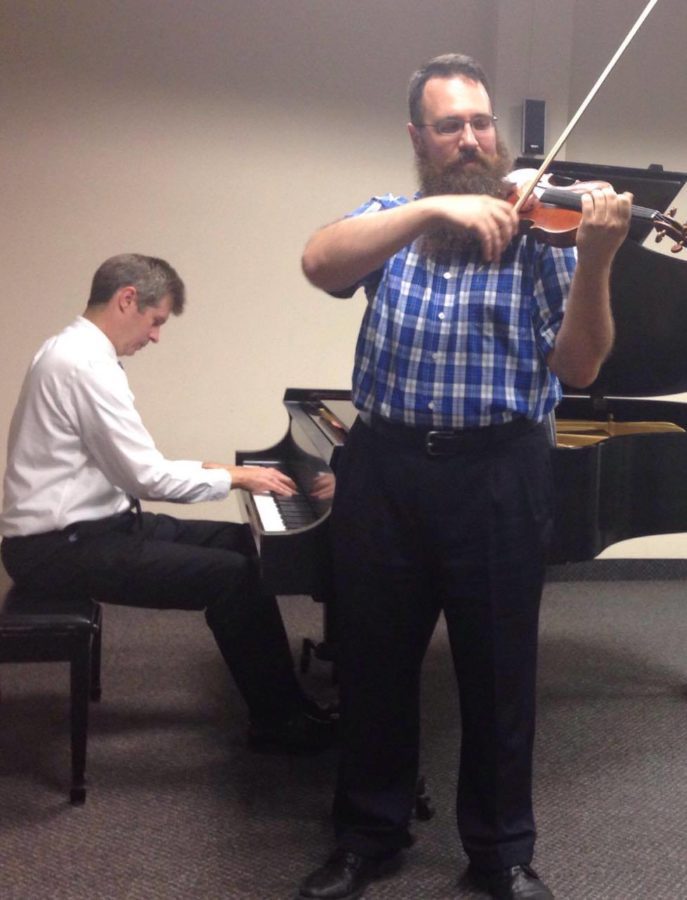 Nathan Hess, D.M.A., left, and Jonathan Moser are two of the performers for the Faculty Collage concert. They will perform as a duet, and Hess will solo as well.

The D’Angelo Department of Music Faculty Recital Series will commence on Sept. 20 at 8 p.m. in Walker Recital Hall. This free Faculty Collage concert features faculty from the D’Angelo Music department and previews the solo recitals they will give throughout the semester.
The evening’s performers will include Nathan Hess, D.M.A., piano; Jonathan Moser, viola; Rebecca Wunch, clarinet; Jonathan Nolan, guitar; and the members of the Presque Isle Saxophone Quartet.
Moser and Hess will perform the first movement of Schubert’s Arpeggione Sonata in A minor, D. 821, transcribed for viola.
The piece is of historical interest as it is one of few lasting works written for the arpeggione, a stringed instrument reminiscent of a guitar, that gained brief popularity after its invention in the 1820s before falling out of fashion.
Moser’s appearance previews his solo recital on Feb. 25, at 4 p.m. in Walker Recital Hall.
Wunch will play Claude Debussy’s “Première rhapsodie,” an Impressionist piece composed for clarinet that will be accompanied by Hess on piano.
Originally written as an examination piece presented to clarinet students at the Paris Conservatoire, it was later arranged by the composer for clarinet and full orchestra.
Wunch and Hess will perform it in its original format.
Wunch will perform with the Presque Isle Saxophone Quartet on tenor saxophone as well, along with fellow members Allen Zürcher, soprano saxophone; Bethany Dressler, alto saxophone; and Scott Meier, Ph.D., baritone saxophone.
“The New York Suite,” a piece by Cuban-born Paquito D’Rivera, is a piece that puts the composer’s jazz influences on full display.
Wunch can also be heard on March 14 at 8 p.m., in Walker Recital Hall, where she will appear as part of another ensemble, the Reed’m and Weep Trio, in which she performs on clarinet, with Hilary Philip on oboe and Carolyn Borland on bassoon.
Nolan, a classical guitarist, will perform “Ráfaga,” which translates to “gust” or “burst,” by Joaquin Turina. A Spanish-born composer, Turina studied in France, where he befriended and was influenced by several of the driving forces behind the Impressionist movement, including Claude Debussy.
A brief piece, “Ráfaga” has an unmistakably Spanish character.
Hess will have a break from accompanying his colleagues as he performs a solo piece, “Nocturne” by Ottorino Respighi, an ethereal piece written in the early 1900s.
Hess’s solo faculty recital will take place on April 25 at 8 p.m. in Walker Recital Hall.
An annual tradition, the Faculty Collage concert promises to be an evening of fine music and an enticing preview of the faculty recitals to come.
As with all Faculty and Roche Guest Artist Recitals, this performance is free and open to the public.
A complete list of this season’s performances can be found at: https://www.mercyhurst.edu/academics/colleges/hafenmaier-college-humanities-arts-and-social-sciences/dangelo-department-music/concerts-events.