Hurst homecoming is a hit 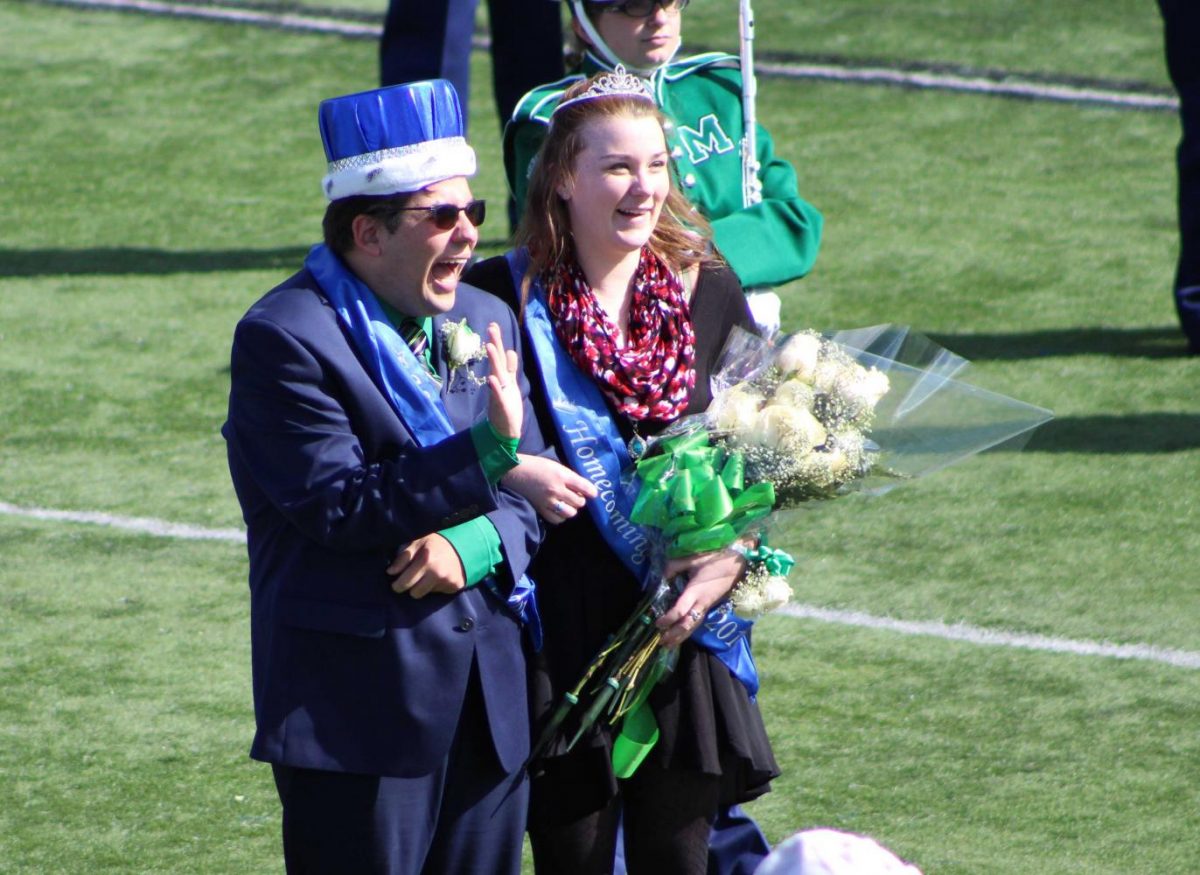 The weekend kicked off with a charity golf outing and bonfire on Friday night. During the bonfire, the band played and the cheerleaders got the crowd excited with their Laker spirit. Saturday morning was a pregame tailgate before the Laker football team went up against Gannon’s Golden Knights. The tailgate had free food, spirit hats for students and a special area for the alumni.
Alumni from all graduating classes came back to participate in the Homecoming festivities.

“My favorite memory of Mercyhurst was hanging with my friends. It was the best time,” said Paulette Vaccar, Class of 1983, who is part of the alumni board.

Each year, alumni come back to meet up with all friends and reminisce about their time at Mercyhurst.

“I think my favorite memory was the pig roast we used to have during SpringFest,”said Brooke Billingsley, Class of 2000. “It was such a fun time to get together with everybody, and it was very enjoyable. So I guess my favorite memory was camaraderie with my fellow students. I came back for Homecoming because my experience at Mercyhurst was so great that I love to come back every year. I get to see everyone, my favorite teachers and all my friends that revisit every year.”

Not all of the Mercyhurst alumni decided to leave after graduation. Some now work at the university. Betsy Frank, Class of 1981, works in the president’s office.

“I work here, and it is wonderful to be home all the time,” said Frank. “I was a cheerleader and after all that experience it has been really fun to come back. My son is an alum as well. It is nice the legacy continued.” Her son, Thomas Frank, received his bachelor’s degree in 2013 and master’s degree in 2015.

Other alumni make longer treks to come back for Homecoming.

“I love the sports and the family-friendly campus. My favorite thing about Homecoming is coming home and saying hi to the boys. I don’t get to see them very much. I live up in Canada so I use my one weekend away to come away from work and back to school and enjoy with the kids,” said Kevan McDacen, a marketing alumnus.

Current students also felt that Homecoming was a nostalgic time for them, too.

“My favorite memory is living with my best friend that I met at school, Julia Detona. My favorite part about Homecoming is getting free food and listening to the band, because they’re the bomb,” said Amanda Smith, a junior Interior Design major.

Molly Mills, a senior Biology major, was nominated for Homecoming court and was voted Homecoming queen by her peers.

“My favorite memory was the Homecoming dance last year,” said Mills. “My favorite thing about Homecoming is that it makes Mercyhurst feel like a bigger university, but we are actually a small school. Just for Homecoming weekend.”

Mills also explained what Homecoming court is and how to be on it.

“If you are a senior, you can get nominated and there are a group of guys and a group of girls. The number changes every year. You just have to show up to the game, we vote through email and then at half time the king and queen are announced,” Mills said.

Emma Preston, a senior Biology and Psychology double major and Homecoming court nominee, said, “My favorite thing about Homecoming is that family can all come, too. I like that it is not just a student thing, but also a family thing and an alumni thing and it is a big Mercyhurst family as well as your own family thing.”

Another student, Noelle Zesky, a freshman Intelligence Studies and Information Technology double major, said, “My favorite thing is seeing everyone, especially seeing alumni because it is such a great supportive community.”

Matt Bernarding, a trumpet player in the Mercyhurst Athletic Band and a freshman Intelligence Studies major, said, “My favorite thing about Mercyhurst is the love from everybody and the caring that comes from them. The best thing about Homecoming is all the food. My favorite band song is probably ‘25 Or 6 To 4.’”

“My favorite thing about Mercyhurst is the ability to make friendships really easily. There are so many groups and so many opportunities to be around people who have your same ideals and values, which makes establishing friendships not difficult at all. It enriches the whole college experience because of that, whether it be with peers, professors or administrators, it is so easy,” said Lowe.

After the Homecoming court was announced at halftime, the Lakers went on to defeat Gannon. Homecoming festivities continued on throughout the rest of the afternoon and into the early part of Sunday.

Lowe talked about the joy of Homecoming and how Mercyhurst has become a second home he will always come back to.

“My favorite thing about Homecoming is that this is the chance where you can come back after you’ve gone because this is your home for four years,” said Lowe. “It’s where you establish part of who you are. And so you can come back and see the people you established those friendships with that made it so wonderful. That experience is so enriching between all of you. It is just great to come back and see each other again.”

Whether current student or alumni, memories are something each person takes with them when they leave.

“My two favorite memories of Mercyhurst in general are the two service trips I went on this year with a group that were all in my major and so being there with them and experiencing that with them,” said Lowe. “And also coming back to Mercyhurst to talk to people about it were my favorite memories.”

After the game on Saturday, there was trivia and a Mass at 4:30 p.m. for the alumni and families that traveled for the game.

A Mass was also held on Sunday at 11 a.m., along with a brunch in Grotto Commons.