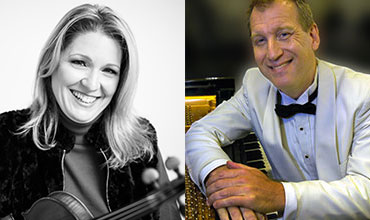 Rachel Stegeman and David Allen Wehr will open the 2017-18 season of the Roche Guest Artist series on Oct. 16 at 8 p.m.

Guest violinist Rachel Stegeman and recital partner pianist David Allen Wehr are coming to Mercyhurst as part of the Roche Guest Artist series in mid-October.
Their recital will take place Oct. 16 at 8 p.m., and a violin masterclass with Stegeman will take place Oct. 17 at 12:45 p.m. Both events will be in Walker Recital Hall.
For Stegeman, who worked as a studio musician for soundtracks prior to her move to Pittsburgh in 2002, the commercial part of her background is not so isolated from her career as a classical musician now.
Stegeman writes, “I’d like to stress that to be successful commercially you need to have the same skills that it takes to be successful in the classical world.”
An active member of the Pittsburgh classical music scene, Stegeman can be heard this season at Duquesne University (where she is an adjunct violin professor), Youngstown Symphony as concertmaster and as the soloist in Vivaldi’s “Four Seasons” in March, Wheeling Symphony as concertmaster, West Virginia Symphony as concertmaster, Johnstown Symphony as concertmaster, Pittsburgh Opera Orchestra as associate concertmaster, Pittsburgh Ballet Theatre Orchestra as associate concertmaster and with the Pittsburgh Symphony as a substitute first violinist.
This is her first recital at Mercyhurst University, but she did come to Mercyhurst last spring to judge the Civic Orchestra’s first annual Concerto and Aria Competition.
The recital will consist of Tartini’s “Devil’s Trill Sonata,” Grieg’s Sonata in C minor, Ravel’s “Tzigane” and Prokofiev’s Sonata in D major for Piano and Violin.
Stegeman played several of the pieces as a student and has returned to them as a professional to reinterpret them.
The “Devil’s Trill Sonata” is a piece that she studied in high school, and the Prokofiev piece was one she played for her senior recital in college.
That being said, what the pieces she chose have in common is that she loves them.
Furthermore, she is excited to be performing them in Walker, having been intrigued by the hall’s acoustics when she judged the Concerto and Aria Competition last spring.
When asked to discuss her selections, she writes that the “Devil’s Trill Sonata” is a “technically challenging piece” and tells listeners to “listen for the difficult double stop trills and the very intimidating cadenza at the end.”
The Grieg sonata, which features an exchange between violin and piano, is a “super energetic and driving piece for both instruments equally.”
Listeners should “listen for the mood changes in each movement,” Stegeman said.
Ravel’s “Tzigane” is a piece that Stegeman has performed both in recital and with the Wheeling Symphony. Stegeman points out the “very long gypsy-esque cadenza at the beginning” and the simple theme presented after it that becomes the basis for variations.
Stegeman says that even though the piece is very rhythmic, “it should seem to be very improvised and free in the interpretation.”
Lastly, Prokofiev’s Sonata in D major for Piano and Violin is a piece Stegeman calls “a strikingly beautiful but very technically challenging work” for both instruments.
Stegeman tells listeners that they should try to pick out “the Russian strength of tonality and surprising cadences,” characteristics of Prokofiev’s that have given him a place as one of her favorite composers.
The masterclass the following afternoon in Walker will involve junior Violin students Kayla Bravchock, a Music Education major, and Grace Ferrara, a Music major. Bravchock will perform the first movement “Allegro” of Mozart’s Concerto no. 4 for Violin, accompanied by collaborative pianist Joyce Kriner, and Ferrara will play the “Gigue” movement of Johann Sebastian Bach’s Partita no. 3 in E Major.
Stegeman said she is honored to be asked to perform at Mercyhurst and in a beautiful concert hall and hopes that she is able to successfully communicate the musical message from these wonderful composers.
She “hopes to inspire a musician out there to be truly great in their life and career.”
As with all Roche Guest Artist recitals, this performance and the masterclass the following day are free and open to the public.