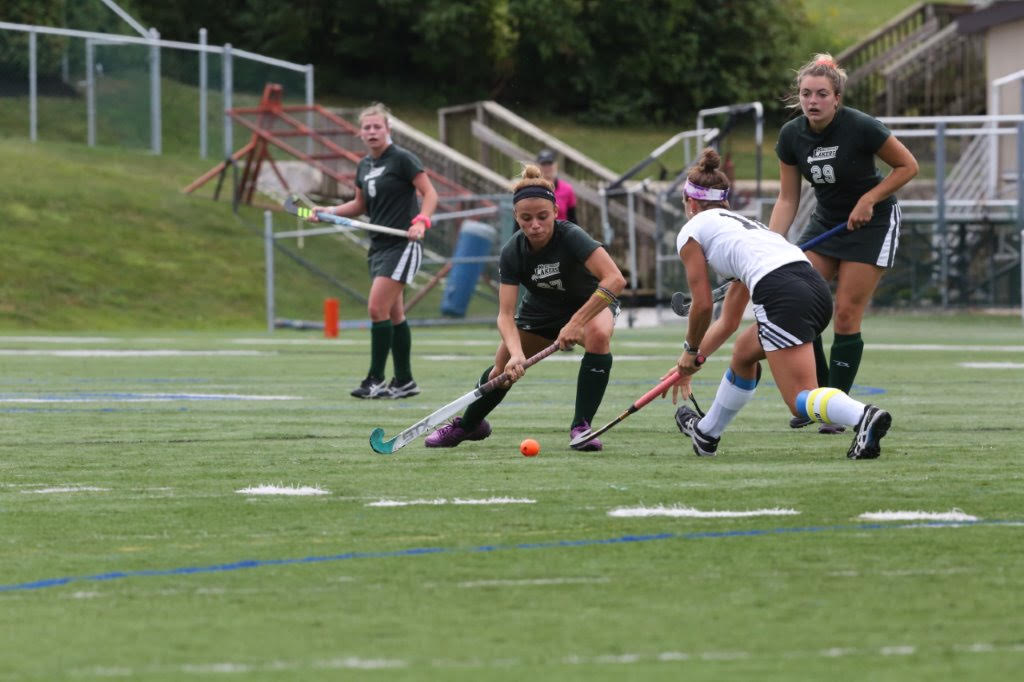 Freshman Nicolette Tomani, left, of the Lakers readies her swing as a Millersville player approaches to do the same. The Lakers lost to Millersville 0-1, but beat Converse College 6-2 two days later.

It’s all situational, but let the craziness of PSAC field hockey continue.  Continuing strong defensive work, Millersville’s Alexis Gazzio scored 26 seconds into a scoreless overtime on Sept. 29 to prevent the Maruaders from suffering yet another upset.  On the other hand, Mercyhurst responded with four first-half goals against Converse College on Sunday to even the club’s record to 5-5, the first time they have been at or above even water this late in the season since the roller coaster 2015 campaign.

At 1-2 in the PSAC, the Lakers sit a half-game out of the cellar. They are only two games behind first-place Shippensburg and Slippery Rock in what is setting up to be one of the closest PSAC races in recent memory.  Friday was no different for Marauder Coach Shelly Behrens’ defense, preventing a single shot on goal despite the Lakers maintaining their standard 3-2-3-2 formation.  Marauder Kathleen Bishop almost broke the stalemate by taking two corners in the third minute, but both were cleared away.  On 14 minutes, Victoria Triaga (5-4, 2.89) made two spectacular saves off a Kyra Brakefield corner — one of five in the first half.  But a well-deserved start for Laker senior Nicolette Tomani after scoring both goals on Sept. 27 against Mansfield did not go as planned.

Only three Laker starters even registered a shot against a Marauder defense that still ranks fourth in the conference for scoring defense.  But the Lakers did continue to play arguably their best defense of the season, holding the Marauders to just one second-half shot and containing Bishop on two corners two minutes into the second half.  But on 57 minutes, just 1:27 after Tomani was re-subbed onto the field, two corners off the stick of Katie Lechner resulted in blocked shots.  Another stopped corner by Lechner set up both teams’ first overtime of the season, with the Lakers posting three consecutive regulation shutouts for the first time since October 2001.

“We’re not going to win every game. I just want us to keep getting better every day we get to be together,” said Behrens in front of her high-school classmate, Laker head coach Stacy Gaudette.
“Today, we got to be a little bit better. We had some lulls, and I think again, that’s what a season does as it builds you. For us, it’s just a matter of playing solid defense, building up our kids, and just going out each day and getting better together.”  Two days later, the Lakers rebounded with four second-half goals in a 6-2 rout of Conference Carolinas opponent Converse.  The Converse Valkyries have begun their first season under Laker alum Kelsey Lovelace, who was hired in November to begin its first season after the school dropped the sport in 1983 after 11 seasons.

During the game, the Valkyries (0-8, 0-3) fell behind just 1:33 into the contest, as Taylor Balser scored unassisted for her to snap a 108-minute scoring drought for the Lakers.  During this time frame, Laker freshman Leah Rogers had already doubled the deficit after she redirected a save behind Ciriaca Petitto (0-73 3.88), for her second of the campaign.  This came as a part of a 27-shot day that saw 19 on goal. The Lakers now maintain a 15-8 first-half scoring advantage, compared with being outscored 15-7 after intermission.  “We have a very solid forward line, and we have a lot of depth…also, so if we switch and we make substitutions, that makes it able for our forwards go hard … and have a solid substitute right after that,” said junior Maeve Magee, who made her first career start against the Valkyries.

“We have a lot of good offensive movement from our defenders to our offense,” said Magee. “Everyone’s playing offense on our team. … Our roster is very ‘depth,’ [and] we were able to utilize that and our fitness.”  A 13-save effort for Petitto, her second-highest output in her freshman year, was far from enough, however.  Just 1:57 into the second half, Ahern lateraled a pass to Tomani for her team-high fourth of the campaign to open up a 5-1 lead before Lechner finally converted one of her seven corners to find Balser for her second of the game.  On Sept. 16, the Huskies won 2-0 on Tullio in the last of a three-game losing streak for the Lakers.  “This team is 150 percent different (than Mansfield) because we’re unified off the field,” said senior Amanda Frappolli. “(This) translated to being unified on the field.”