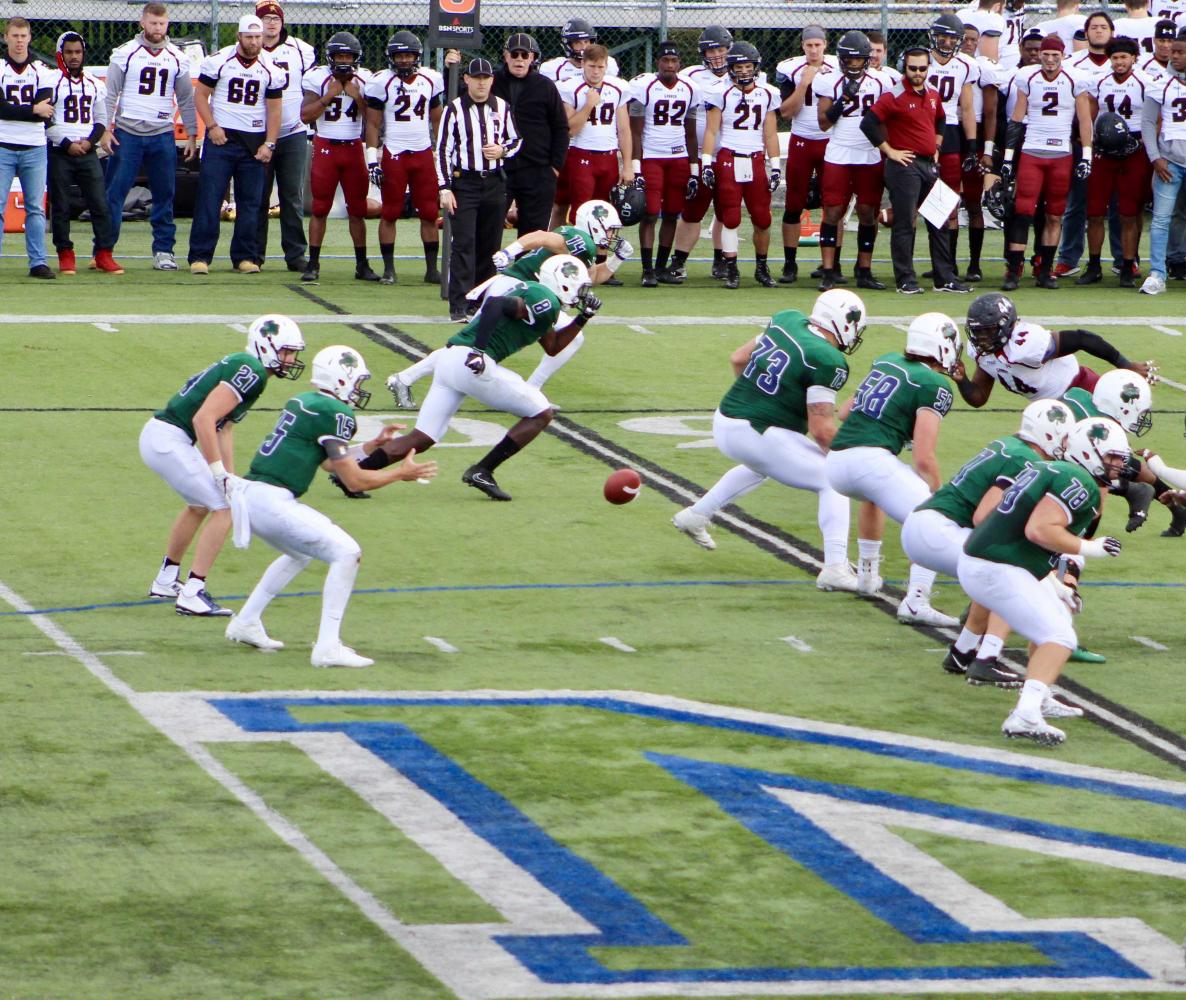 Redshirt sophomore quarterback Doug Altavilla readies his hands for the ball after the snap. Altavilla was 16 for 26 for 315 yards and had one touchdown pass against the Gannon Golden Knights.

In a nail-biting and dramatic Homecoming game Saturday, the Mercyhurst Lakers football team pulled off a 24-22 win against Gannon University.  The rivalry win was a major cause for celebration for the 4,012 current and former Lakers in attendance at the Sept. 30 game.  The Lakers started off strong against the Golden Knights. At a little over 12 minutes into the game, redshirt freshman running back Garrett Owens closed off the first drive of the game with a 42-yard touchdown run.  Freshman kicker Mark Shafer booted the extra point in, bringing the score to 7-0 for the first quarter.

There would be little time for celebration, though, as the Golden Knights marched into the endzone at the 9:43 mark, tying the game at 7-7.  The following drive by the Golden Knights would put them over the Lakers for the beginning of the second quarter 10-7 with a 23-yard field goal.  However, this would be the only time in the entire game that Gannon held the lead.  The Lakers took the lead back with 3:46 to go in the half. Senior wide receiver Brad Novak caught a 42-yard touchdown pass from Mercyhurst redshirt sophomore quarterback Doug Altavilla to take the total to 13-10, Lakers.

Gannon desperately but unsuccessfully tried to score a touchdown as the Lakers defense ferociously fought them off.  After a long and intense battle, the Laker defense forced a turnover on downs by the Golden Knights, effectively ending the contest right there.  As Gannon’s players walked off the field, ecstatic Lakers celebrated their hard-won victory.  The Lakers received the Niagara Cup, symbolizing their victory over the rival Golden Knights.

“I feel pretty happy right now,” said redshirt senior defensive back Tarique Ellis. “It’s nice to beat Gannon in back-to-back years.” Ellis had three tackles and six assists on defense.  Junior tight end Bryce Mostoller was also thrilled about the outcome.  “It’s an unbelievable feeling just to knock off your rivals,” said Mostoller. “We brought intensity this whole game. We played well as a team.”  Head coach Marty Schaetzle, whose team is now 3-2 for the season, reflected similar thoughts.  “I think we were able to keep their high-powered offense in check,” Schaetzle said. “I’m really happy for our players, and for all the fans that came out to watch the game.”

The Lakers will return to Tullio Field on Oct. 7, this time against Slippery Rock.  Slippery Rock is ranked 18th in the American Football Coaches Association Division II national poll and pulled off an exciting overtime victory over fifth-ranked California University of Pennsylvania the same day the Lakers beat the Golden Knights.