Save green by being green 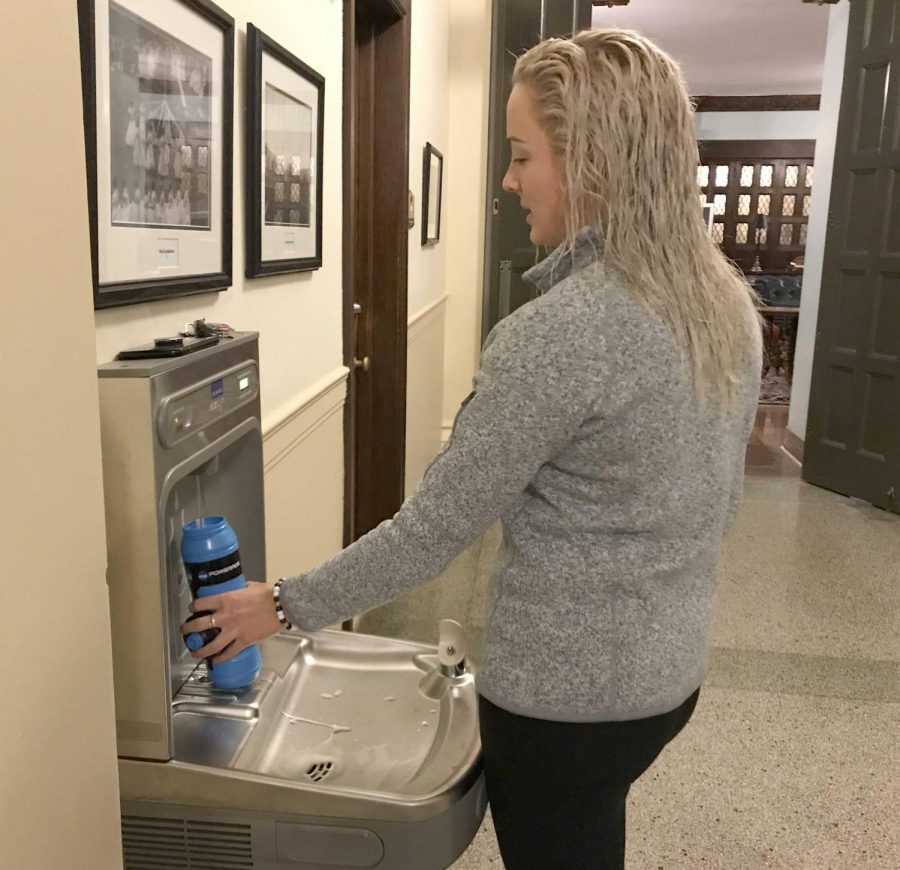 Mercyhurst is taking a step toward a greener tomorrow with the recent installation of an eco-friendly water bottle refill fountain in Old Main.

Located outside of the provost’s office, the fountain is the first stage of a continuing process led by David Myron, vice president of Finance and Administration; Sarah Bennett, sustainability coordinator; and student ambassador Mark Mullinger to eliminate the need for plastic water bottles on campus.

The campaign to instill this change on campus began over the summer when Myron came up with the idea for the water bottle refill stations.

“It was prompted by seeing so many students, faculty and staff carrying around plastic bottles of water in addition to seeing so many plastic water bottles in the recycling bins,” said Myron.

In his proposal to the Sustainability Fund Review Board, he also cites the direct financial implications as a driving factor in his decision.

Bennett helped to make the program a reality by researching types of systems, ultimately deciding upon the Elkay EZ H20, a system noted for its hygiene, efficiency and sustainability. She also worked alongside Mullinger to determine places of traffic in the school that would be appropriate to install a station.

This information was compiled in a proposal given to the Sustainability Fund Review Board in September. Board members discussed and unanimously approved the request for $10,000. An additional $2,500 was donated by the university and Mercyhurst Student Government.

Although only one station has been installed thus far, students are already responding positively.

“I’ve heard from faculty, staff and students that the new fill station is awesome,” said Bennett. “I did overhear some students wondering why there was only one station installed by the provost’s office.”

Both Bennett and Myron confirmed that more fountains will be added throughout the year and that the Old Main location was a preliminary test of student interest.

“This was the first step to see if they will be used and accepted by the university community,” said Myron. “There will be 12 stations initially installed. Ten will be installed on the Erie campus and two will be installed at North East.”

Potential locations on the Erie campus include the Recreation Center entrance, Student Union by the main floor bathrooms, Zurn first floor, Audrey Hirt Academic Center, Warde Hall by the main bathroom, and in the 24-hour lounge.

\Students are invited to begin using the water bottle filling stations right away and begin their own paths to water bottle free future.