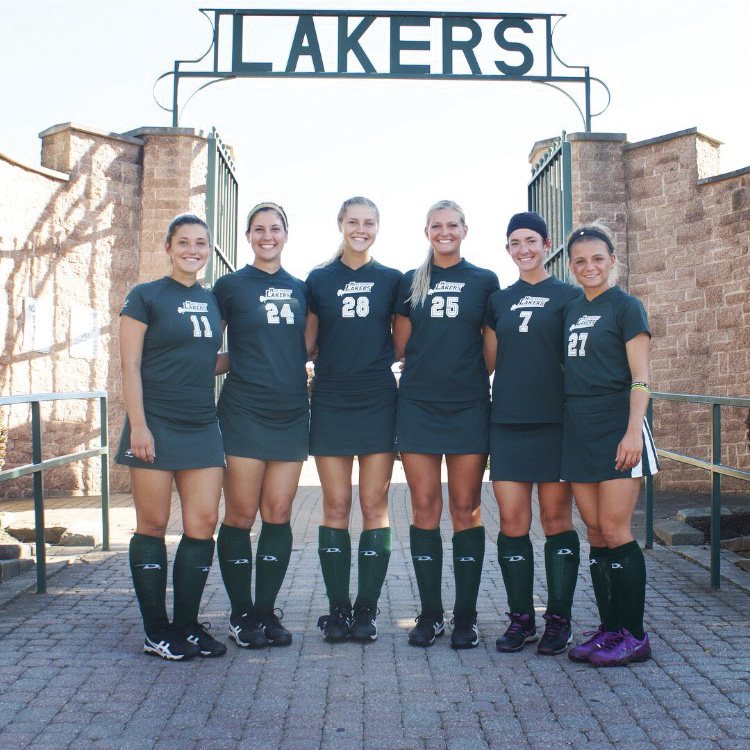 A disappointing yet momentum-building campaign for Mercyhurst field hockey crashed into the offseason on a rainy Oct. 28 at Tullio Field.  A shootout Oct. 25 also handed the Lakers a frustrating shutout defeat at the hands of the Seton Hill Griffins earlier in the week.  The Lakers fell to Shippensburg University Red Raiders, who stayed atop the Pennsylvania State Athletic Conference (PSAC) standings heading into the conference tournament.  Despite a 25-shot attack, while top-ranked Shippensburg lit up Laker goalie Victoria Triaga for three first-half goals and held off a furious comeback to snatch a 4-3 win and take further momentum into the conference tournament.

The Lakers (7-11, 2-8) finish the campaign with five more wins than their 2016 season, but five of their seven were against nonconference opponents.  Three days earlier, the current version of the Griffins (4-14, 1-9)needed four shootout goals off Triaga to snatch their first and only conference win of the season.  A defensive battle saw the Lakers pepper 25 shots, including 20 after the first half on the Griffins’ Alexandra Piekarz.  Piekarz managed to hold off the Lakers’ Katelyn Smith only after Triaga stopped Maia Cheeks in a 3-all shootout.  The Griffins’ Ashley Curnow then turned the ensuing score off Triaga into the Lakers’ sixth loss in their last nine games.  Bryna Cook and Kayla Chapman worked to open the scoring, but Piekarz stopped Christina Mertz to spark four straight conversions by the Griffins.  Despite having already secured the top spot in the conference tournament in their previous game, the defending national champion Red Raiders (14-3, 9-1) kept their engine running against the Lakers.

Taking advantage of Laker coach Stacy Gaudette swapping Leah Rogers for starting forward Katie Ballew at 7:21, the Red Raiders’ Brooke Sheibley took advantage of the ill-timed substitution and found Lauren Zengulis exactly two seconds later.  It was just six minutes later that the Red Raiders’ Kylie Huffman converted next off a corner from Caitlyn Wink, the first of a combined six straight goals off a corner-stroke opportunity.  In the interim came a flurry of 13 Red Raider shots, five of which were turned aside by Triaga, but the Red Raiders were able to get another in to make the tally 3-0.  It was just 3:31 into the second half that the Red Raiders stretched their shot advantage to 19-1 overall to keep the Laker defense on their toes.

The Red Raiders’ Jazmin Petratonio struck her eighth of the season, adding onto a day in which the Laker defense allowed at least 20 shots and the Red Raider offense recorded such.  But the tide began to turn 46 minutes in, after Red Raiders goalie Ally Mooney stopped Nicolette Tomani in front.  On the ensuing corner 30 seconds later, Laker junior Kaitlyn Lechner, coming off her first two goals of the season, came down the field and found Clare Ahern.  Ahern assisted Tomani, who punctuated her Senior Day with her team- and career-high ninth of the season. Tomani marks the first time a Laker has recorded that many in four years.  Eight minutes later, Lechner sent home her third of the season to cut the deficit to two with 15:59 remaining in regulation.  The Red Raiders immediately subbed in Catherine Matuszko as Mooney allowed at least as many goals as she made saves for the first time since Sept. 9 in Bloomsburg.

It initially appeared Matuszko would fare no better than her mentee, as Lechner’s fifth and final corner of the half with 5:32 left in regulation resulted in a stopped shot eight seconds later.  But one more Parr corner and Triaga’s last of her season and career-high 11 saves couldn’t generate any more momentum as the Red Raiders held off.  “I think that despite the weather and the fact that they were the No. 1 team, that we did a really good job of playing against them,” said Smith. “The comeback was great because it just shows how well we can play field hockey as a team together.”