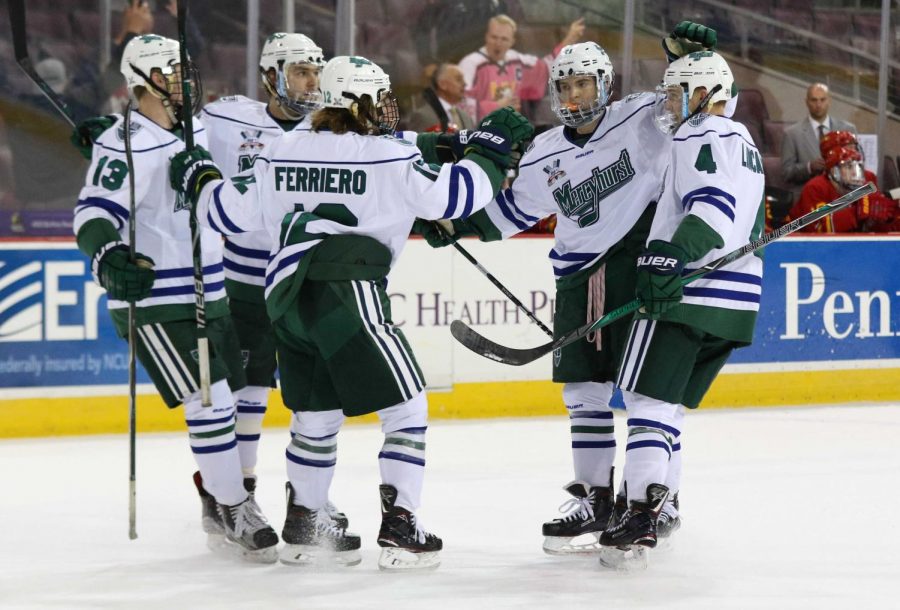 Lakers celebrate during their Oct. 27-28 series at Bentley University.

In back-to-back games against the Bentley University Falcons, the Lakers walked away with a loss and a win.  The Falcons opened the scoring in game one’s first period to give themselves a 1-0 lead.  The scoring remained that way until the second period, when Les Lancaster (assisted by James Anderson and Jeremy Wu) put the Lakers on the board.  The game remained tied until 2:14 into the third period, when Bentley’s Kyle Schmidt broke the tie to give the Falcons a 2-1 lead.

Not three minutes later, Bentley’s Luke Santerno managed to net one in and put the Falcons up 3-1.  Leading into a power play opportunity for the Lakers, Jonathan Charbonneau scored (assisted by Lancaster and Joseph Duszak), cutting the Falcons’ lead in half.  A short 20 seconds later, the Lakers’ Kane Elliot (assisted by Anderson) put another one on the board to tie the game once more.  The game remained tied at 3, until Bentley’s Connor Brassard shot in a tiebreaking score with 6:09 remaining on the clock.  From here, the Falcons would go on to win the game.

In game two however, the Lakers came back on Saturday to win 2-0, giving the Lakers their first Atlantic Hockey win.  There were only 15 seconds left in the second period when Taylor Best (assisted by Matthew Whittaker and Joshua Lammon) managed to find the back of the net.  The Lakers went on the power play with 1:40 remaining in the third, and Jack Riley netted one just before the buzzer, giving the Lakers a 2-0 win.  Laker goalie Brandon Wildung made 24 saves for the game and recorded his first shutout of the 2017-2018 season.   “It’s great to see him rewarded with a shutout tonight,” said Lakers head coach Rick Gotkin on Wildung’s goaltending in Saturday’s game. “He’s been very good for us all year.”

The Lakers take the ice next Nov. 3-4 against Penn State.