Tabla for Two plays for peace 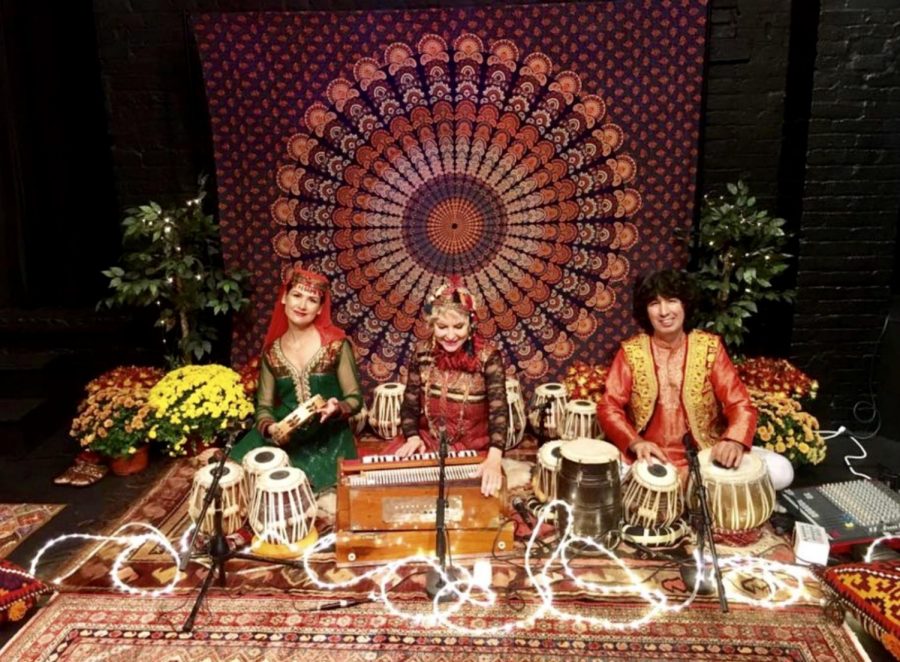 Tabla for Two will be coming to Mercyhurst on Nov. 6. Sofya Savkina, left, is the dancer who is will be accompanying duo Masood Omari, right, and Abigail Adams Greenway.

The Mary D’Angelo department of Music is having unique musicians coming to Mercyhurst University as a part of its Roche Guest Artist Series.
The musicians are Tabla for Two, which is made up of Masood Omari and Abigail Adams Greenway.
Omari is from Ghazny, Afghanistan.
In 2002, he obtained his gurmani (or mastership) from Araf Chishty, who was his ustad (meaning a respected teacher and master).
He shares the Punjab lineage with Zakir Hussain, who is one of the most well-known tabla players in the world.
Omari’s compositions consists of a combination of classical Eastern beats with the Western style.
He can play the dholak and harmonium, and he sings.
He is also the only artist who can play the tabla and sing at the same time.
Greenway is originally from Erie. After she met Omari, she changed her career from the visual arts to music after being enraptured by Omari’s tabla playing.
She studied under him for two years and then formed Tabla for Two with Omari. She has had her art featured in an exhibit in the Erie Art Museum.
The performance will include Sofya Savkina, a guest dancer from the Ural mountain district in Russia. Savkina will be dancing for five of the songs.
The performance is entitled “Playing for Peace.”
Their goal in this performance is to ensure the continuance of the traditional music of Afghanistan and India and to help Western audiences appreciate it more.
The performers truly represent how music can be intertwined across cultures.
This performance is a conglomeration of 20 songs consisting of old Bollywood, classical, folk and new compositions.
The songs will be sung in Farsi and Hindi.
Farsi is the indigenous name for the Persian language.
If you are a fan of Bollywood, you may recognize the song “Chup Gaye Sare Nazare” from the classic 1969 film “Do Raaste,” “Baharo Phool Barsao” from the 1966 film “Suraj” or even “Mo He Bhool Gaye” from the 1952 classic “Baiju Bawra.”
This is not the first time Tabla for Two has graced the stages of Mercyhurst.
“Tabla for Two first came to Mercyhurst in 2014, and the Walker Recital Hall filled to capacity. They had to set up chairs on the stage because there were not enough seats in the Walker Recital Hall,” said Nathan Hess, D.M.A., director of the Roche Guest Artist Series and chair of the Music department.
Hess said, “I was looking for something different and I wanted to see if they were interested in coming back.”
The recital will take place Nov. 6 at 8 p.m. in Walker Recital Hall.
The next day, there will be a masterclass from 12:45 to 1:45 p.m.
The masterclass will be an interactive opportunity for all Music majors, instead of the usual select few who play the instrument.
Both of these events are free and open to the public because they are being sponsored through the Terry and Margaret M. Roche Family.