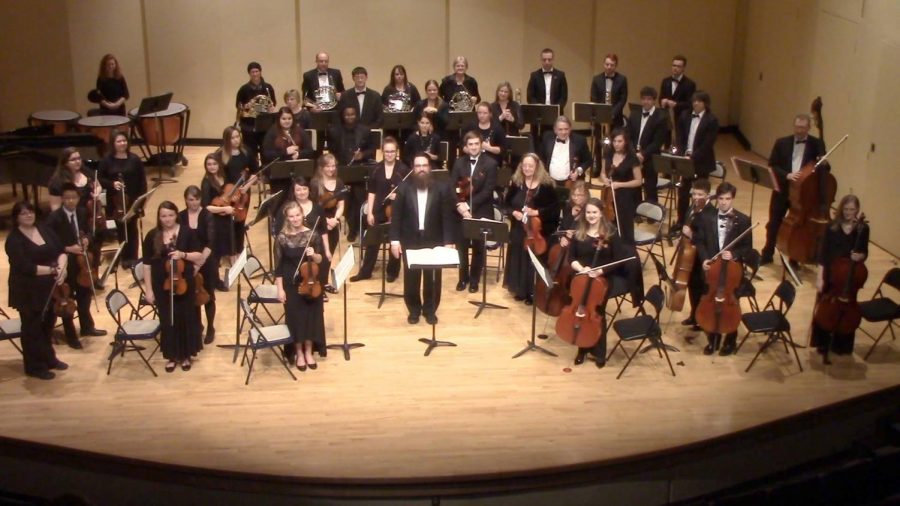 The Mercyhurst Civic Orchestra had a successful performance at Walker Recital Hall on Oct. 29.

On Oct. 29, the Mercyhurst Civic Orchestra took to the stage of Walker Recital Hall to perform two Eastern European, Romantic Era pieces.
The first, Dvorak’s Violin Concerto in A minor, was directed by guest conductor David Tedford, D.M.A., with Jonathan Moser on solo violin.
The piece on the second half of the program, Tchaikovsky’s Symphony no. 4, was directed by Moser.
The orchestra’s sound was warm and full, filling the hall and accentuating each change in dynamics and mood.
The selected pieces showcased the different sections of the orchestra, with each section producing a balanced, unified sound.
As the orchestra has grown, so have its sound and color matured, at times blending so beautifully as to create the aural impression of a sea of sound enveloping the audience.
The Dvorak piece, the first on the program, showcased Moser’s sensitivity as a violinist and the orchestra’s ability to transition to an accompanying role without losing any of its power or musicality.
At times, dreamlike violin passages contrasted with stately responses from the orchestra.
The piece ended with a competitive interplay between the soloist and the ensemble.
The third movement of this piece was joyous and dance-like, with lively violin passages given a delicate accompaniment by various instruments throughout.
The movement built to an unhindered and free conclusion, with the music growing in power and enthusiasm but never escaping the control of the musicians.
At times, the soloist seemed to join in with the first violin section, to escape dramatically just when the listener grew accustomed to the blending of the voices.
Moser took the conductor’s podium for the Tchaikovsky, dedicating the same level of energy to his conducting as he did to his violin performance.
Although the symphony was very light and carefree at times, the foreboding theme from the brass section that began the piece made reappearances throughout, keeping the piece grounded and keeping the joy in check.
As Moser noted before the start of the symphony, the theme was meant to symbolize “fate” herself, a force against which the composer struggled.
The third movement of the symphony was of note as the strings played entirely pizzicato, calling and answering one another in a chattering dialogue.
When the woodwinds entered at the cue of the oboe, they were gentle and smooth, communicating with one another with a sort of controlled affection before stepping back for the strings to enter again.
Tellingly, the brass section was tacet for this lighter movement, but the ominous theme of fate returned in the final movement.
The final movement was frenzied at times while at other times it found an uneasy calm that never lasted very long.
The brass section became more daunting, and the parts the other instruments played seemed to struggle against it.
The coda was wild and frantic, though never without control, ending on a chord held in a glorious crescendo before finally releasing.
After having given this auspicious debut to their 2017-18 season, the Civic Orchestra can be heard next on Dec. 10 at 4 p.m.