Mental illnesses and how they are treated 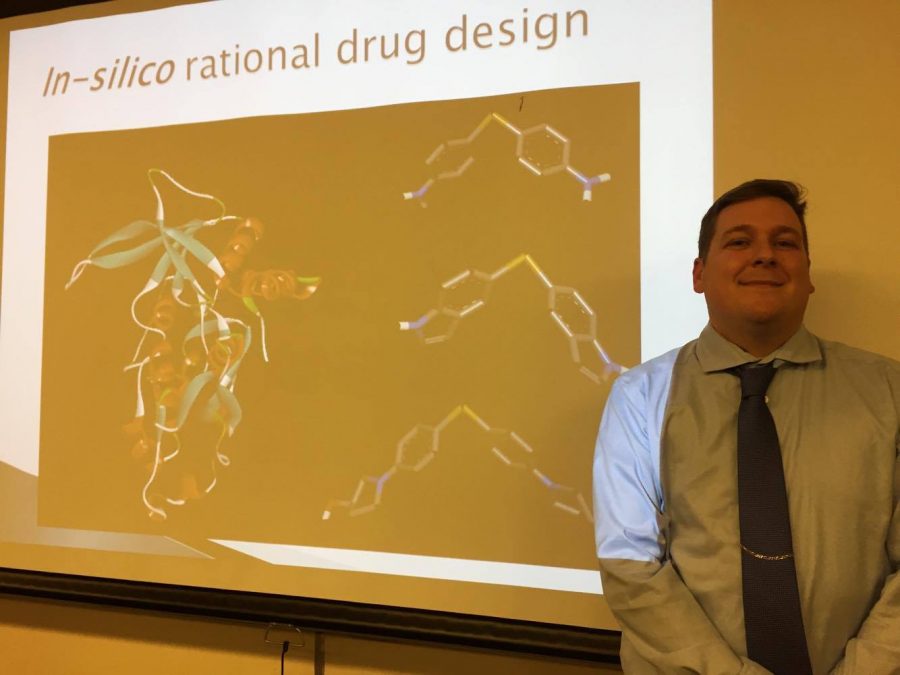 On Nov. 2, Kyle Scully, Ph.D., returned to the university to discuss mental illness and the pharmacology that goes along with it. His presentation was titled “Past, Present, and Future of Psychopharmacology.”

Scully graduated from then-Mercyhurst College in 2008 with a B.S. degree in Applied Forensic Science with a concentration in Chemistry and Toxicology. He now works at Lake Erie College of Osteopathic Medicine (LECOM).

He first addressed the students about his studies and how it is OK to change majors and continue to learn new things.

“Never close your eyes to an opportunity. Take chances and try new things,” said Scully. “If you stop growing, you are dying. If you are not learning, you are stagnating. Never be satisfied. Keep pushing for more.”

He then got to the heart of his discussion which was talking about the evolution of mental illness, the stigmas that follow and how they were/are treated. He discussed how many people will hide the fact that they have an illness or not seek treatment due to the negative nature associated with mental illness.

“About 20 percent of people will be diagnosed with mental illness. That is only those who are willing to seek help and seek the diagnosis,” said Scully. “Five percent of the general population suffers so badly and cannot be managed, that it is actually a disability.”

In the past, mental illness was thought of as punishment, such as for deviating away from religion, demonic possession or sorcery.

“Diversity wasn’t a thing as far as behavior went. Everyone had to follow the same rules. Anything outside of that was considered demonic possession or outside of being human,” Scully said.

There was a negative stigma. Families hid the ones with illness away. Some were left in the streets or disowned and left to their own devices.

“As time moved on, we turned to asylums, some which turned to prisons for the mentally ill,” said Scully. “The goal of treatment was to calm them down and make them manageable. Get them out of society and get them so they were not a bother for those who worked at the asylums.”

Most medications from the beginning, like herbs and poppies, were used to calm down patients or sedate them.

“There is something to this natural product where we grind up an herb and give it to them, we just did not know it then,” Scully said.

Scully discussed different techniques, like drilling holes in people’s heads (trephining), that ancient, and some current, people believed would help in the curing of mental illness.

“We looked at all kinds of crazy things to make people fit the norm,” said Scully. “And these old thoughts and old traditions are not gone. They still exist in some parts of the world.”

Doctors and caretakers then moved to the idea that the people needed to be taken care of and not just put away to manage for the rest of their lives. Most experimentation on cures were done in asylums, and there were no ethical code at the time.

“Everything from a slapping machine, where a patient was left to be slapped by leather straps until they were normal,” said Scully. “It was even the advent of electric shock.”

Discoveries were made, but the process was brutal and unethical. Humans were treated more like lab rats than actual human beings.

“Then we got one step further than trephining. We started drilling holes and cutting connections. Scrambling brains and seeing what happens,” Scully said.

At this point, the root of the problem was still not clear.

“You have to implicate the brain,” Scully said.

“This is where we learned, maybe they are more linked than we thought,” said Scully. “It is not just one excites and one inhibits.”

The realization came to be that these were not all that separate. Trying to diagnose a problem and an illness was convoluted.

“The diagnostic criteria overlaps so heavily, and we don’t know why,” Scully said.

By accident, drugs were found that could treat certain things. The first discovery in the 1950s accidentally came out of the dye industry. At the time pharmacologists did not know how or why it worked, but they did not care because it was working.

“As science progressed, and we discovered receptors and enzymes and how the body works, we were able to come up with strategies to target the illness or disease,” said Scully. “We are trying to fix something we think is wrong.”

He continued the discussion talking about how in most cases a normal medication only works for one or two injuries or diseases. But when it comes to mental illness, one drug could have many uses, and not everyone is going to respond in the same way to the medication.

There are many manifestations of the same functions. Thinking that serotonin or dopamine is going to fix something is a false truth. It could be one of those in a certain brain region, but not necessarily just serotonin itself.

“We don’t know enough about pathophysiology to treat the disease. We are treating the symptoms. We are just putting a finger in the dam,” Scully said.

Psychiatric drugs can be tricky and also harmful. Scully quoted David Anderson, Ph.D., from his Ted Talk about how adverse effects of drugs can be like dumping oil on an engine instead of in the engine.

“Some will get where it needs to go and fix the engine, but the rest is just out there wreaking havoc,” said Scully. “We can not fix the problem without creating nine others.”

Scully discussed his research, in which he uses natural products in grapes.

“Nature is so much more creative than any lab scientist dreams of being in terms of chemical structure. It is an untapped resource that we need to tap,” he said.

After months of theoretically synthesizing molecules on a computer, and then recreating that in a lab, his research started showing success.

“My research has finally resulted in the filing of a patent with the patent office for novel anticonvulsant that I designed for my dissertation,” Scully said.

Lastly, he talked about where this subject needs to go into the future.

“We need to fill in the gaps and build that bridge so we can treat our patients effectively without causing adverse effects,” said Scully. “There needs to be a culture shift.”