MU XC: taking it in strides 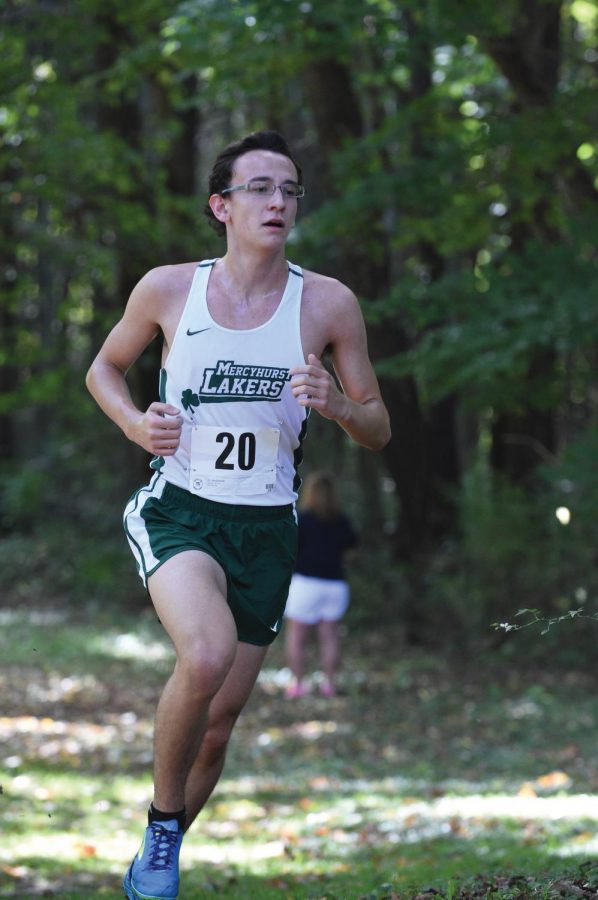 Junior Danny Dmuchowski will be the only senior on the men’s team next year.

The season is now over for both of the Mercyhurst Cross Country teams. The women’s team had strong senior leadership by Mary Jaskowak, Sydney Van Leeuwen, Kelly Bochnewetch and Robyn Hoover.  Opening the season at the Westminster Invitational, the women’s team finished second out of the 12 teams.  Sophomore Molly Kennedy placed first and Jaskowak placed eighth out of 138.  During the second race at the Notre Dame Catholic Championships, the women placed fourth out of 14 non-Division I teams.  In the Louisville Classic, the women’s team competed in the silver race and finished third out of 42 teams.

The team also finished first among 11 Division II teams, led by Jaskowak, who finished seventh in the field out of the 334 individual competitors.  With more than 3,000 competing athletes, the Louisville Classic is the largest collegiate cross meet in the USA.  At the 11th annual race against Gannon University, the women’s team won, claiming five of the first seven spots.  Kennedy won her second individual championship this year, followed closely by Jaskowak in second.  During their fifth race in the Pennsylvania State Athletic Conference (PSAC) Championships in California, Pa., the women finished ninth out of the 18 teams.  Finishing up their season, the women placed 12th out of the 22 teams in the NCAA Atlantic Regional Race.  Overall, the record for the season was 79 wins and 25 losses in the six races.

“The women’s team had a solid season building towards what should be a very good season in 2018,” said Coach Mike Fraley. “This a rebuilding year for the men’s team.”  He said the team lost the top five runners from last year’s team after finishing seventh place in the NCAA Atlantic Region race in 2016.  Starting off the season, the men finished seventh out of the 10 teams at the Westminster Invitational.  Freshman Dylan Bemiss led the team, finishing 29th in a field of 110 runners.  “Four of the men’s team’s finishers were underclassmen, making for a bright future,” said Fraley.

For the second race, the men competed at Notre Dame and finished 11th out of the 16 teams.  During the Louisville Classic, the men finished 39th out of the 48 competing teams.  Unfortunately, the men did lose their annual one-on-one race against Gannon University.  In the PSAC Championships, the men finished 15th out of the 16 teams.  Wrapping up the season at the NCAA Atlantic Regional race, the men finished 19th in the 19-team field.  The future looks solid for both teams, with “returning runners who made solid contributions to our race in 2017,” said Fraley.  “This group has been a pleasure to coach and has made solid achievements both academically and athletically,” said Fraley.