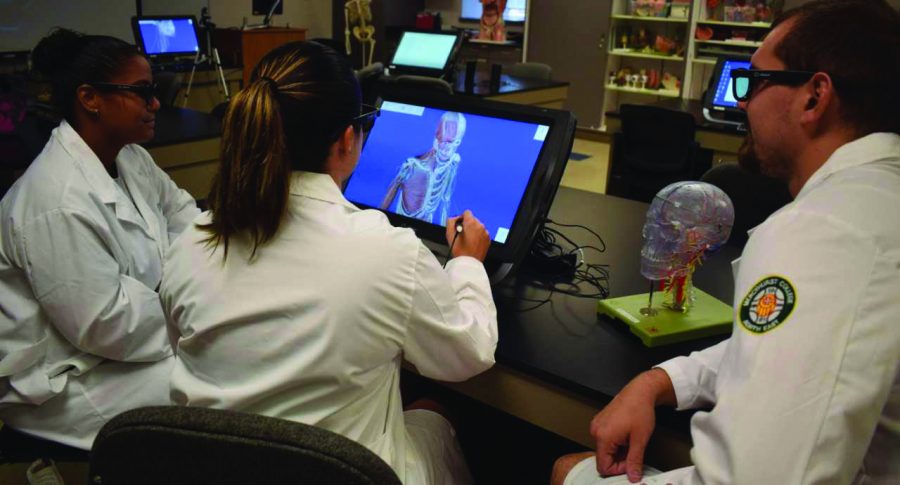 The anatomy students at Mercyhurst North East recently received innovative technology to help them study the human body. The new equipment came all thanks to a Perkins grant.

MNE was given six computers with zSpace virtual reality on them. This technology allows students and instructors to pick up, move and examine different layers of the body. There is even a part of the software that helps the students properly pronounce terms.

“The students are able to manipulate the body; rotate it, bring the structures close up and turn on/off certain body system structures,” said Kari Dundore-Shrout, director of the Biology department at MNE. “In addition, they can have the body move and in real time see how the bones, muscles and joints interact with each other.”

The 3D representations give a better and deeper understanding of how the body is actually put together.

“Though the textbook continues to give students the best descriptive help with human physiology, this app allows the students to see the detail of the human body and its complicated organ or structures in a 3D nature that a flat 2D picture in a textbook cannot,” Dundore-Shrout said.

Dundore-Shrout explains that even though only six computers were received, it is better than every person having the software on their phones or tablets.

“These computer screens are fairly large, and because we have six units (one for each lab station in our classroom),” said Dundore-Shrout. “Students are able to visualize the structures and organs on a large scale that they may not have been able to see in a 3D app on their phone or tablet.”

Videos that are associated with each part of the body provide hordes of information.

“They can watch an animation on arm flexion while watching how the bicep muscle contracts pulling on the arm bones. While the video is running, the students can rotate the arm around, watching the movement from multiple angles,” said Dundore-Shrout. “In addition, students can click on certain body structures or organs and see clinically relevant features of the organ or structure and diseases associated with that organ or structure.”

This new technology is not only good learning tool for teaching, but it also sets the university apart.

“We hope that allowing our students to use this amazing new technology will set us aside from other health professional schools because it brings anatomy to life for these students,” said Dundore-Shrout. “Not many other programs have this new technology, so it gives our students an advantage over other universities.”