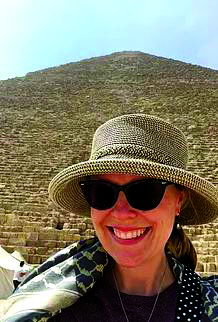 Leslie Fitzpatrick, Ph.D., has worked throughout the world in locations such as Croatia, Mexico and Peru.

Fitzpatrick received her undergraduate degree in Mechanical Engineering from Georgia Institute of Technology. From there, she went on the University of Georgia for her Special Education

Fitzpatrick acknowledged the unexpectedness of her transition from engineering to anthropology.

While she was at GSU, Fitzpatrick began to focus her work on stable isotope analysis of human remains. She was also able to work at excavations of both historic and prehistoric sites in Croatia, Mexico and Peru.

In order to continue studies in bioarchaeology, Fitzpatrick attended the University of Wyoming, where she was able to complete her Ph.D. in October.

“While at UW, I became involved with using stable isotope analysis techniques in forensic cases, which I will be continuing at Mercyhurst,” said Fitzpatrick. “Through combining traditional forensic anthropology techniques with stable isotope analysis, we are able to gain a better understanding of an individual’s movements across different regions during their lifetime, which provides important information to law enforcement that may not be gleaned from other investigative techniques.”

Fitzpatrick is extremely excited to be a part of the Mercyhurst family and appreciates both the opportunities provided by her department, as well as the atmosphere.

“I was attracted to Mercyhurst primarily because of the reputation of both the faculty members in the Applied Forensic Sciences department as well as the program itself,” said Fitzpatrick. “Being part of this department is an incredible honor, as I sincerely value the opportunities for field-based research that we provide our students as well as the supportive environment.”