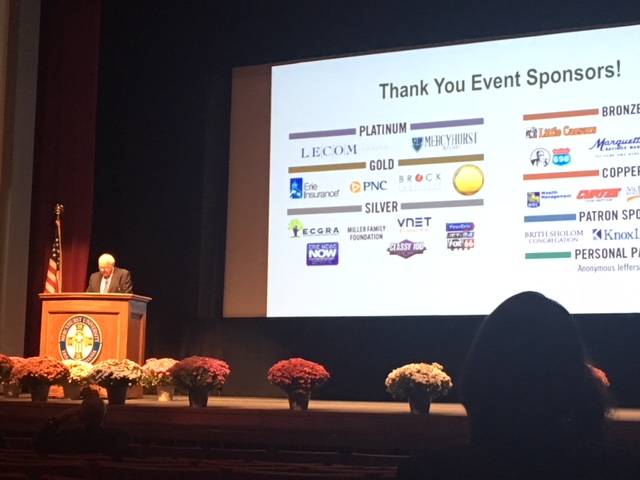 Members of the Erie community gathered at the Mary D’Angelo Performing Arts Center on Nov. 13 for the fifth event in the Jefferson Educational Society’s Global Summit series, “The End of One Era, The Start of Another: German-American Relations in the Age of Trump.”

He served as the director of the German-American Institute in Tübingen and the leader of the European office of the German Marshall Fund of the United States in Bonn, making his expertise in the subject evident. Janes also holds Germany’s highest civilian honor: the Officer’s Cross of the Order of Merit of the Federal Republic of Germany.

He laid the framework for the evening’s lecture with a quote by Danish philosopher Søren Kierkegaard: “Life can only be understood backwards, but it must be lived forwards.” From this, Janes explained that in order to anticipate the future of German-American relations in the Trump era, historians must take a critical look back through history.

“The history of German-American relations is written in many different chapters,” said Janes. “Some of them have been painful, some have been extremely successful. We have had to learn from each of them. But I believe the most recent chapters have reminded us that with no other region does the United States have such a close alignment in values, interests, capabilities and goals.”

He made special note throughout his presentation of both the context and relevance of historical events and how they would later pave the way for future developments.

He began his journey through Germany history in 1648 and continued through the 20th century World Wars, the Cold War, and the tearing down of the Berlin Wall. He critically examined the role of Germany and the United States both individually and as a world power, which later allowed him to make predictions about future.

“It is doubtful that any country or region will have a dominant role in the next decade,” said Janes. “The 21st century will not be America’s century as it was in the 20th, it will not be China, Asia, or perhaps anyone else. The emerging international system will be populated by numerous power centers as well as multiple versions of how power should be used. For the first time in history, an independent world may be without a center of gravity and a global guardian.”

He finished his lecture with recognition of recent events within the Trump presidency, specifically his strained relationship with German Chancellor Angela Merkel.

“While we are just a bit more than 10 months into the era of Trump, the impact on transatlantic relations, changing expectations and attitudes towards each other on both sides of the Atlantic are easy to be seen,” said Janes.

Audience members seemed to be especially interested in the dynamics between Germany and the Trump administration, evident in the numerous questions surrounding the subject during the final question-and-answer session.

The evening concluded with a comparison of President Barack Obama’s relationship with Germany to that of President Trump, the effects of nationalism and populism, and nuclear powers.

As a whole, the event proved to be highly educational and left audience members with a better understanding of the past, present, and future of German-American relations.