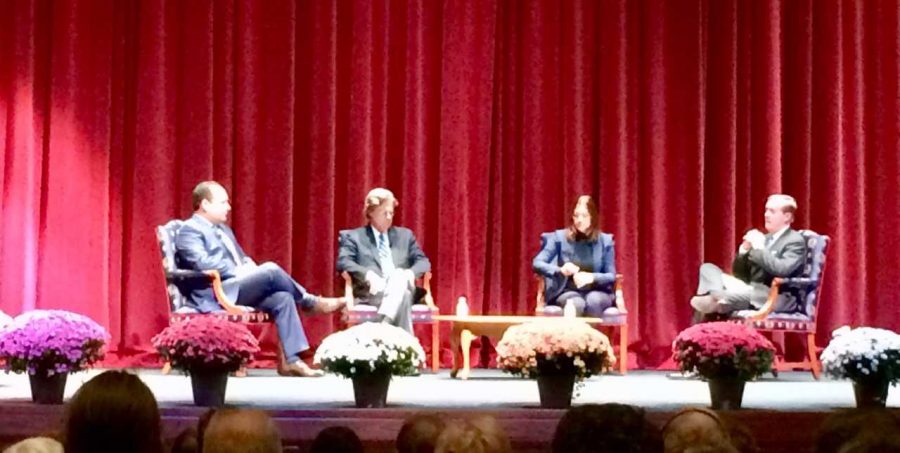 As a sponsor of the Jefferson Educational Society’s Global Summit IX, Mercyhurst University hosted a panel discussion, “Understanding Trump: Washington Insiders on the 45th President” on Nov. 9 in the Mary D’Angelo Performing Center.

Rucker began the conversation by citing Trump as unpredictable.

“He wants to change Washington and the government at large. He wants you to like him. In public, you’re the despicable scum of the media, but in the Oval Office, you’re his best friend. He sees a lot of value in personal relationships and is a total salesman,” Rucker said.

York agreed, saying that Trump “is governing like he campaigned. There is daily and weekly controversy. In this way, less attention is paid to his administration.”

Palmeri, who was reporting on Britain’s decision to leave the European Union prior to the election of Trump, made connections between Brexit and the Trump election.

“I feel like our situation is completely mirrored in the U.K.,” Palmeri said, adding that “Trump is very aggressive yet charming.”

The conversation then turned to Trump’s relationship with the media, and the panelists mainly discussed how the adversarial relationship distracts from the nitty-gritty of Trump’s administration and his policies. They considered this to be an unapologetic distraction strategy. However, they did agree that the White House has been far more open than it was in recent years, with far greater access to the president.

On this subject, they discussed Trump’s tweets, and his transparency as a political leader.

“Although unconventional, they are actual presidential statements, regardless of the medium,” said York. “You have to take them seriously.”

Palmeri agreed, saying “usually you have to do so much reporting to know how the president is feeling. Trump is relatively transparent. So now we need to look at not what he’s feeling, but what he is doing.”

The mainstay of attempting to understand Trump across the board was an analysis of his unpredictability.

“The best way to understand him is not to predict too much. Coming out of the business world, I think, he is ill-equipped to deal with lawmakers and members of Congress that come from a very different standpoint and are ideologically motivated,” said Rucker. “He thrives by feeding off other people but is always the dominant one.”

Palmeri reiterated this and said that Trump’s unpredictable nature was a strong point of his character in terms of North Korea.

“It’s a strength. Like ‘how crazy do you think I am?’” Palmeri said.

Finally, the panel discussed the end game, and the future of the presidency.

“Just watch what he does. There is a controversy every day,” said York. “But he is one of the most active Republican presidents since Reagan, and it’s all about the noise.”

In addition, they cited George Papadopoulos as a major threat to Trump right now, along with mass shootings.

Ending the conversation where it began, Scully once more asked the question “How can we attempt to understand Trump?”

Again, Rucker stated that the best way to understand him is often not to try excessively to do so.

Palmeri concluded by saying “I think we need to accept the fact that he is not changing and just examine how he’s running this country. He’ll keep the story about him, and I wonder if people will eventually just tune out. The economy will be a major factor.”