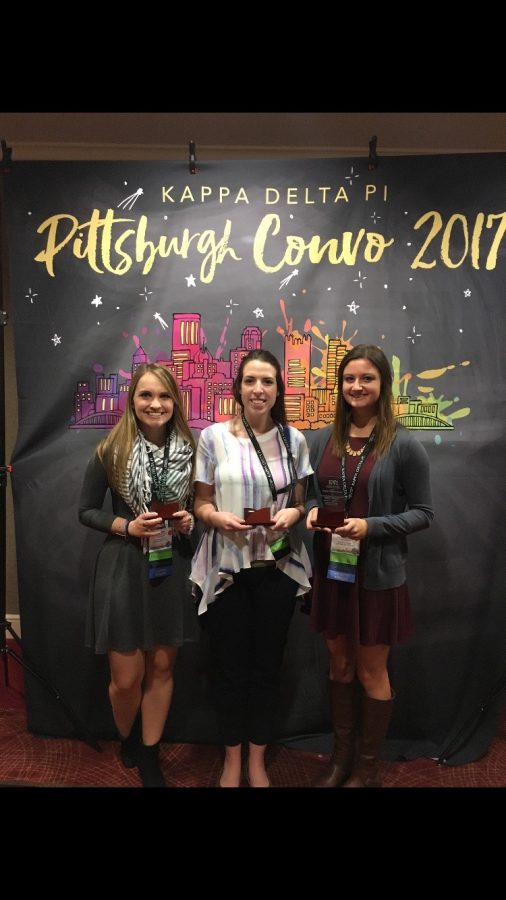 “There are more than 300 university chapters in the U.S., and out of those 300 chapters, we were selected as one of a few to receive some awards,” said Sarah Howorth, Ph.D., professor of Education.

The conference, which brings together chapters from all over, is held every two years. This year’s event, which included the awards, was held Oct. 26-28 in Pittsburgh.

“The awards we won at the convocation this year were pretty exciting,” said Kelli Deighan, junior, double major in Early Childhood Education and Special Education. “We got two for professional development. One from last year and one from the year before that.”

The third award was a community service award from last year.

“Madison Bruno, one of our members, came up with that idea and we originally collected boxes for Operation Christmas Child and we had such a big interest that we decided to do it with our Carpe Diem Academy students as well,” said Howorth. “So all the students in first and second grade got a Christmas box wrapped and inside the box were some literacy activities, simple toys, toothbrushes, mittens and things like that.”

Kappa Delta Pi is the only education society that has a chapter at Mercyhurst. The organization has been around for more than 100 years, though the Mercyhurst chapter is younger, Howorth said.

The mission of the society is “to help our members reach academic excellence and dedication to the teaching profession. Kappa Delta Pi is the only organization that represents all educators — regardless of subject area specialty, degree obtained, grade-level focus or years of teaching experience,” according to the group’s website.

“Though diverse, all KDP members share a common purpose: We are a dynamic community of exceptional educators committed to promoting excellence in the education profession by recognizing and advancing scholarship, leadership,” according to the website.

At Mercyhurst, the Alpha Beta Pi chapter holds many initiatives throughout the year that reach out into the local community.

“We do a Literacy Alive initiative, which is a community outreach where we do a literacy intervention with students, and a lot of chapters do this as well,” said Morgan Wangler, a senior Early Childhood and Special Education double major.

“We have also brought in Marc Brown, the author of ‘Arthur.’ The students in Literacy Alive made a picture book and then Marc Brown talked to them and Mercyhurst students about being a children’s book author,” Wangler said. “This year we are thinking about doing something along the lines of Dr. Seuss.”

Even after graduation, some alumni return to the conferences to speak.

“Different speakers come back a lot of times and they talk about certain topics,” said Deighan. “Last year one of ours was ‘Take a Bite Out of Technology,’ so we had a lot of speakers come and talk about incorporating technology into the classroom.”

All three agree that earning the awards was exciting and good to see the hard work of the individuals involved to be recognized.